Back in 2012, I interviewed Maine comic book artist and creator Jay Piscopo about his take on Captain Midnight, and his Kirby/Toth sendup Sea Ghost.

Sea Ghost is just one of the many characters starring in the Capt’n Eli ‘Nemoverse’ that heads into its third volume of all ages friendly comic book fare. 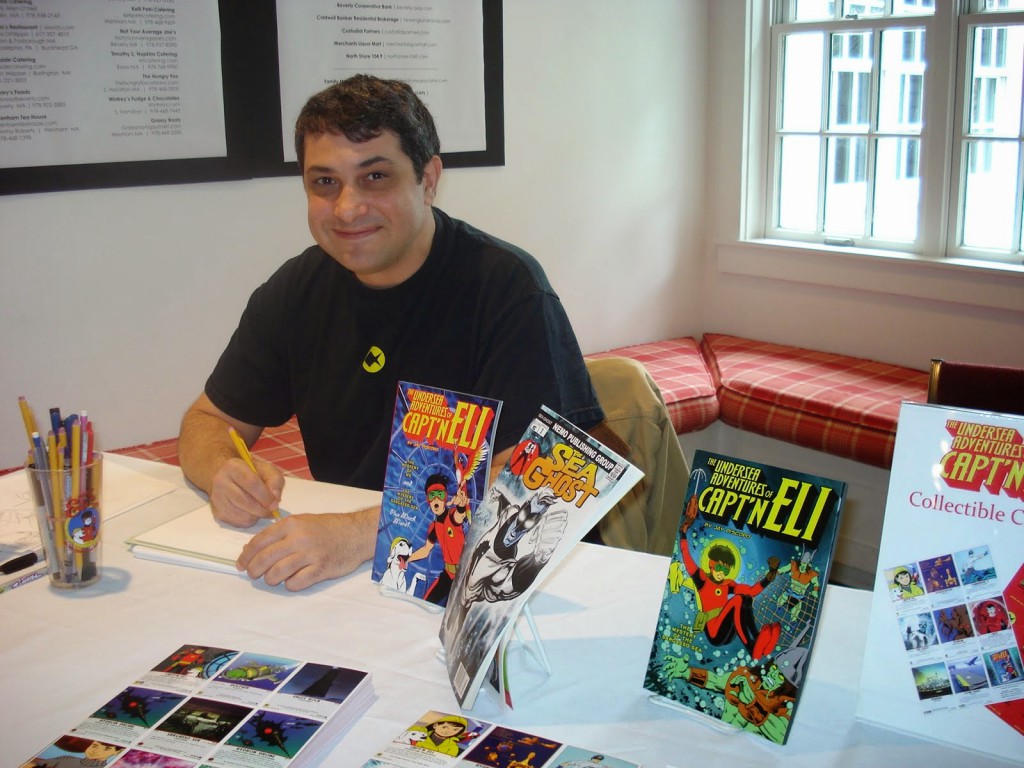 Jay will warn you this isn’t for kids, and I agree—this is just great comic book storytelling. And the fact that he draws like the aforementioned masters doesn’t make me want to turn away.

Jay joins us on the Cosmic Treadmill this week to plumb to the depths of The Undersea Adventures of Capt’n Eli Vol. 3 as well as his awesome action figure for Sea Ghost — sure to be a hit with Mego collectors!

FOG!: Thanks for joining us, Jay! It has been a while. There are all new adventures in Capt’n Eli Vol. 3. What can the readers expect this time around?

Jay Piscopo: Thanks Clay! Good to talk to you again! Yes, Capt’n Eli is back!

Book 3 is another installment in Eli’s never ending story. At the end of Book 2, Capt’n Eli and Commander X saved Princess Coral of the undersea kingdom of Aquaria but the ramifications are huge. 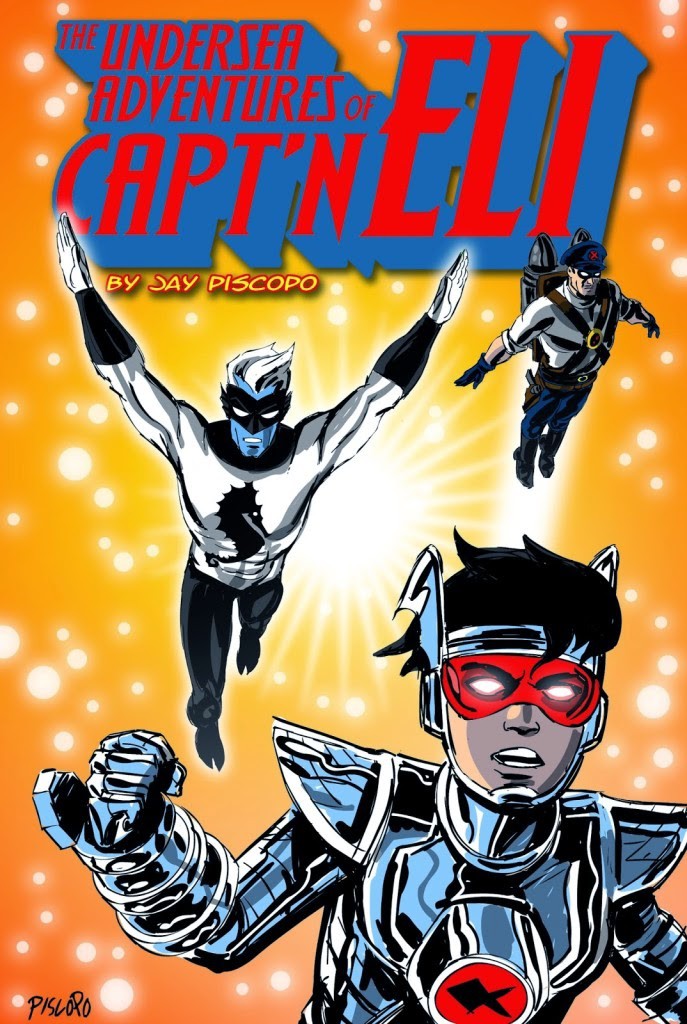 When we open up Book 3 – Commander X has been captured by Lord Hydro, Eli is a fugitive and in the middle of a global war between Aquaria and the surface world! The Eli universe or Nemoverse as we like to call it, really opens up with revelations about old characters and introducing a lot of new ones, exotic locations and giant ancient war robots. 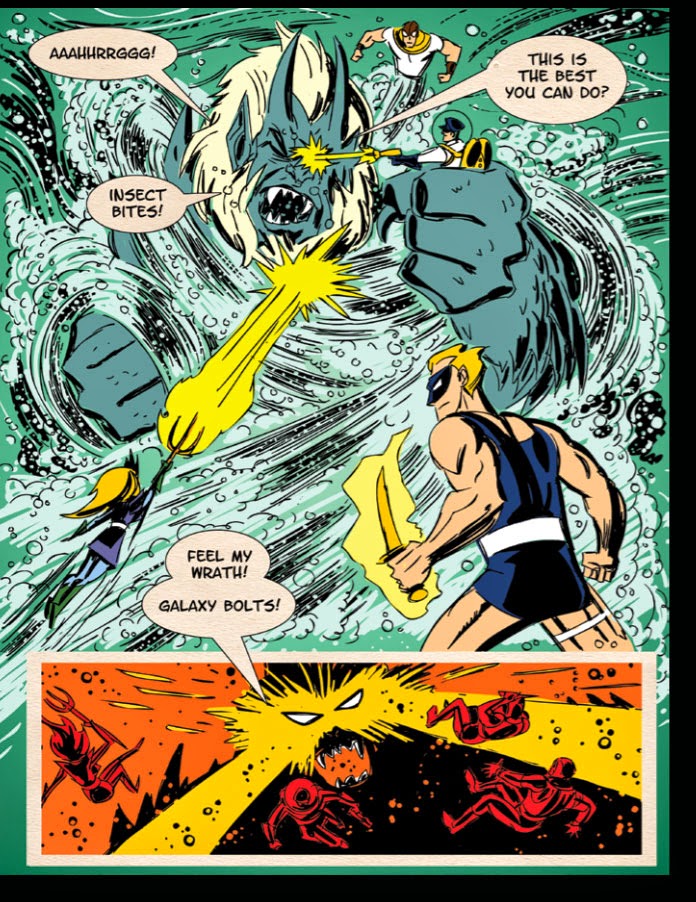 ..and the stories remain in your glorious Silver Age style and are all ages. What appeals to you about keeping the stories all ages?

I think a lot of comic fans think “all ages” mean “babyish” or there is an avoidance of relevant or difficult issues because the story is friendly to kids.

On the contrary—while overly graphic adult themes are avoided, an all ages story can be compelling because of it’s universality.

During the Silver Age, comic creators knew it was a kid’s medium but they also knew adults were reading.

I think it’s much harder work to create the balance of appealing to both audiences.

It’s a challenge, but one of my biggest influences, Star Trek, did this perfectly—In general, it’s about keeping a sense of wonder alive in us at any age.

Of course you know I’m a big fan of your art style. Is there more computer renderings in this volume in comparison to the other comics in this world? Sea Ghost was more Kirby than this one, in my observations. Are you having fun with this style?

Thanks so much! I love to go between a couple styles—depending on the content.

In The Capt’n Eli books, it is heavy on the computer generated backgrounds. 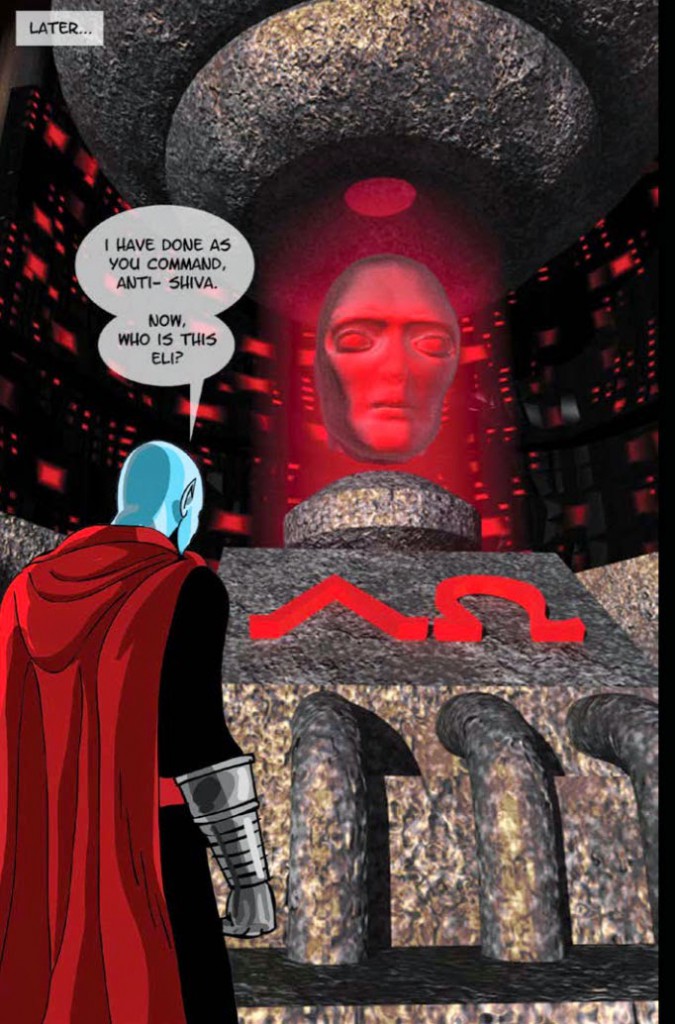 Book 3 was a ball because of all the giant robots and monsters—It’s an homage to all the Japanese monster movies I loved in my youth and the 3D effect really helps bring it alive.

The back up Commander X story is all hand drawn in a more primitive style like the Golden Age. Love doing that too. And there is always some Kirby influence somewhere.

The cast of this book, from giant robots to all manner of Ultra-Heroes is unreal! Is this the volume that pushes you into ‘Official Handbook’ territory? Who are some of your new favorite characters in this book? 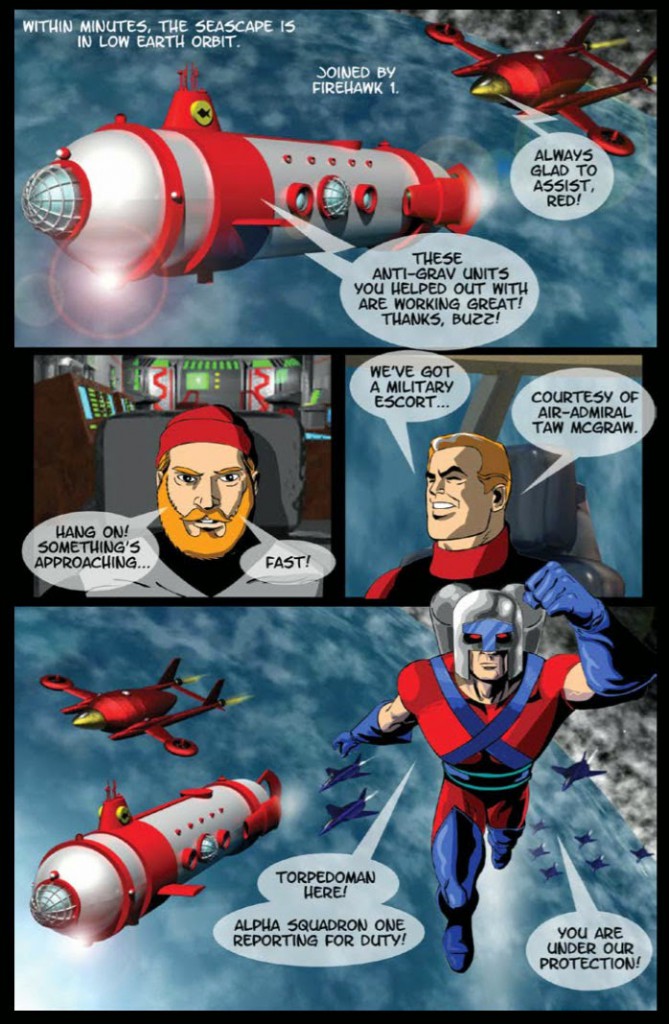 There are also tons of public domain heroes like The Shark, Maureen Marine and Hydroman—I really should go count—This book is packed.

We learn more about Prof. Wow — will he be surprising us more as the days go on? 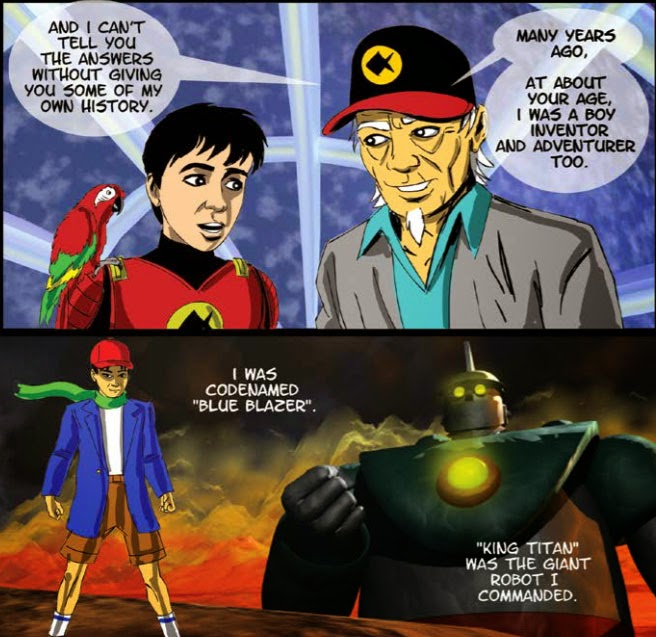 How is your Sea Ghost action figure is coming along? Are any Capt’n Eli toys launching with this volume?

The Sea Ghost figure and Book 3 are basically launching together, The figure came out last month and is being received very well. I’m excited we will be getting the figure and other products in gift shops as well as comic stores and look forward to getting to some conventions. 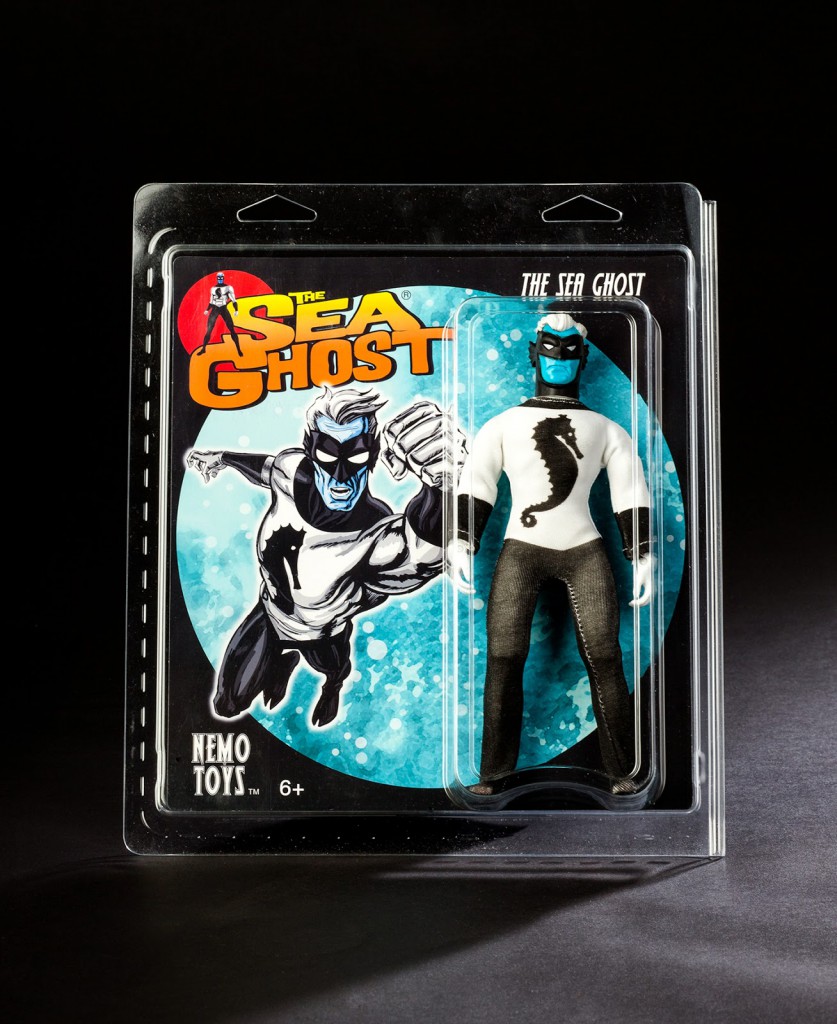 We’ve got some other Nemo Toys releases later in the year I’d love to talk to you about.

With the Aquaman casting photo last week there was a lot of excitement. Who would be your dream casting for Sea Ghost or Commander X when the day comes for those movies? 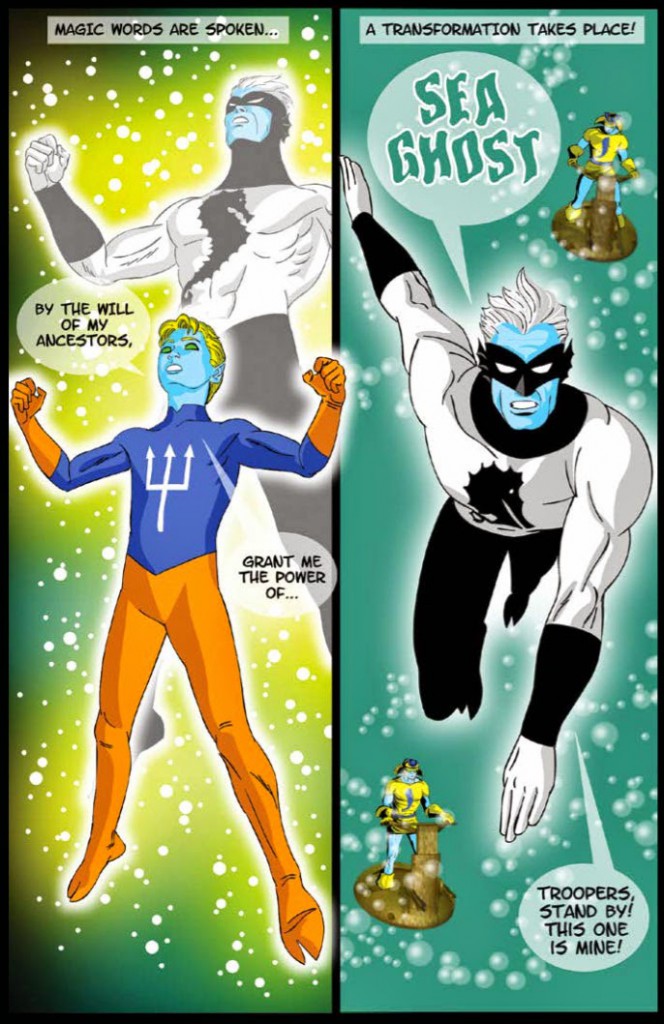 To be honest, it’s not something I even fantasized —I’ve been so focused on how Sea Ghost and the Capt’n Eli universe will translate into animation, I only thought about voices!

I did open up the question on Facebook and got some interesting responses: Eric Bana, John Hamm- when I thought about it, Ryan Gosling came to mind!

Are there any other projects coming down the pipeline?

Yes, A Man Called Strange, a reworking of the Nedor character Doc Strange. 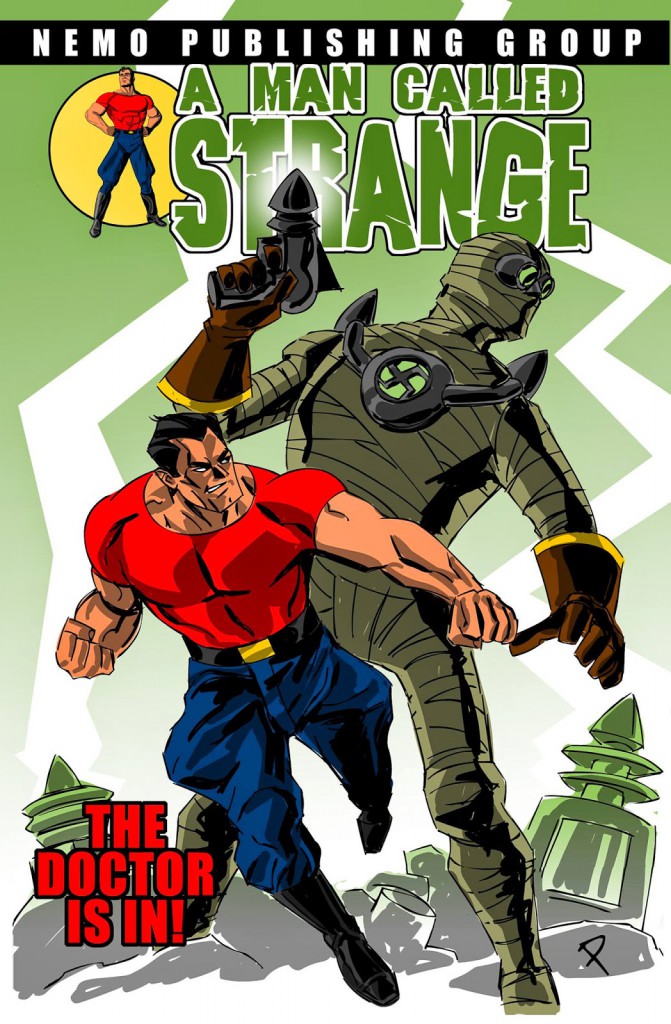 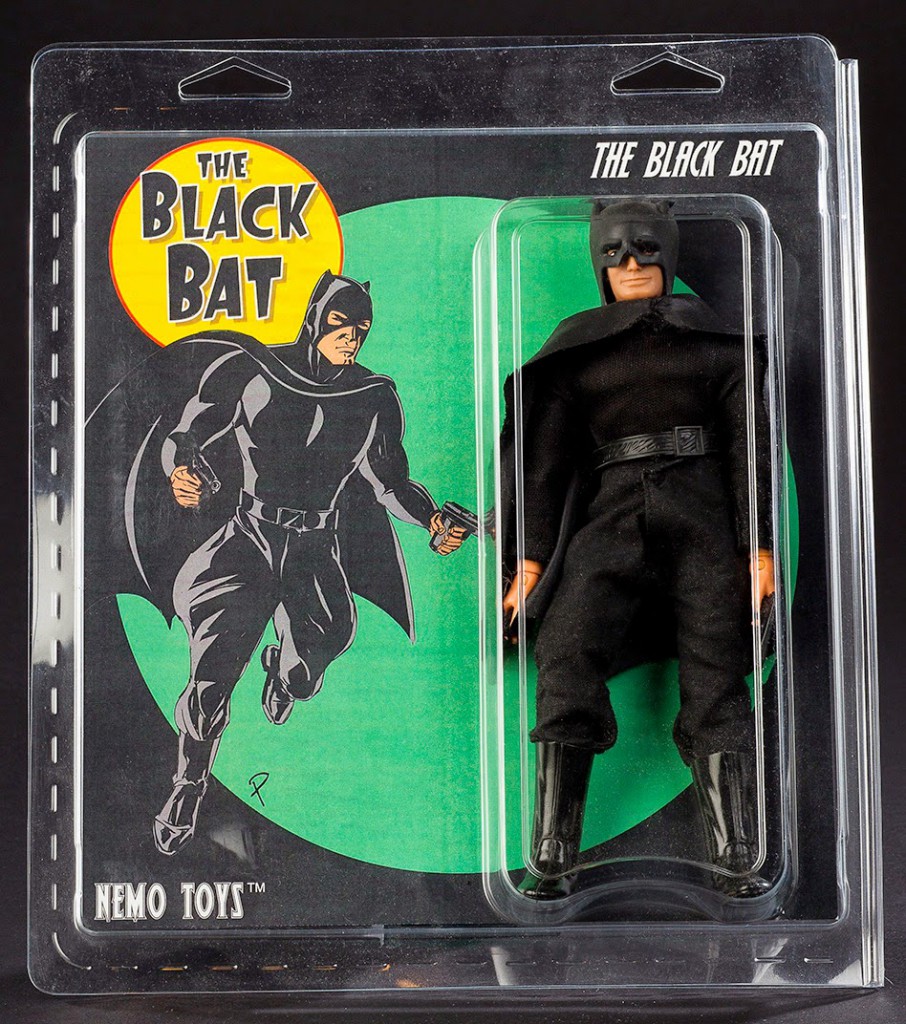