Chicago Comic & Entertainment Expo (C2E2) is this week and Dynamite Entertainment gave us an inside scoop about some upcoming announcements.

At the top of the stack is today’s solicitation for the complete creative team for the July’s new ongoing Will Eisner’s The Spirit written by Matt Wagner and drawn by Dan Schkade (San Hannibal). Also, notably, keep on the lookout for some amazing covers by Alex Ross, The Goon’s Eric Powell and so many more.

Of course Matt is most well known for such classics as Grendel, Mage, Sandman Mystery Theatre and a number of memorable Batman stories — my favorite being Batman: Faces (Legends of the Dark Knight).

Recently at Dynamite he has taken on Green Hornet, Zorro and The Shadow—so no one was surprised at Matt being assigned to scribe Eisner’s The Spirit. 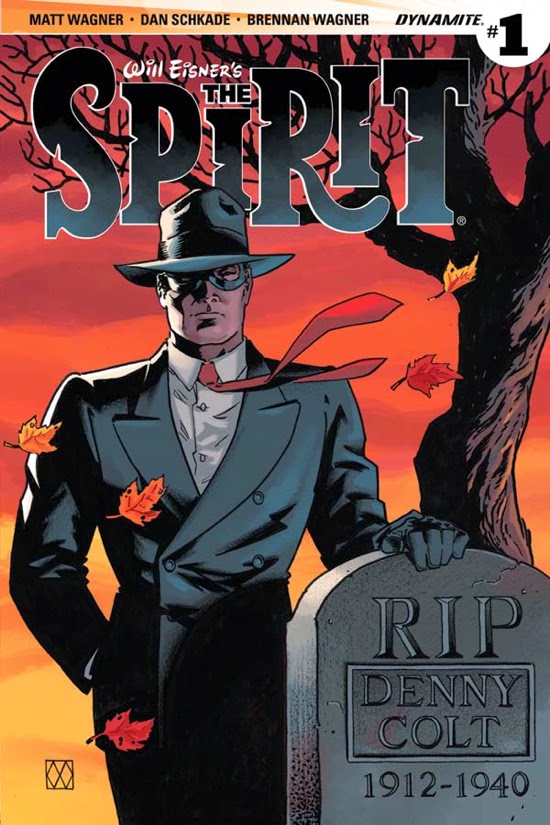 Well, maybe Matt was, and he is here to join us and tell us about it!

FOG!: Matt, thanks for joining us today! The Spirit ongoing is exciting news, and we’re excited you are the one to take it on, though you’ve mentioned that even for you this is intimidating! What made you relent to the requests to take on Denny Colt?

Matt Wagner: Well, I’ve been a big fan of both Eisner and The Spirit for many, many years. As a result of my reverence for both the creator and the property, I at first said, “No” when Dynamite offered me the chance to write an all-new relaunch in honor of the character’s 75th anniversary.

But both Dynamite publisher Nick Barrucci and their Editor-in-Chief Joe Rybandt were both persistent in getting me on board; “We think you’re perfect for this gig!” Eventually, they broke through my resistance and now I’m happy they did.

When did you first get inspired by Eisner or The Spirit?

I first discovered The Spirit via the over-sized, B&W reprints from Warren Publications in the mid 70s. 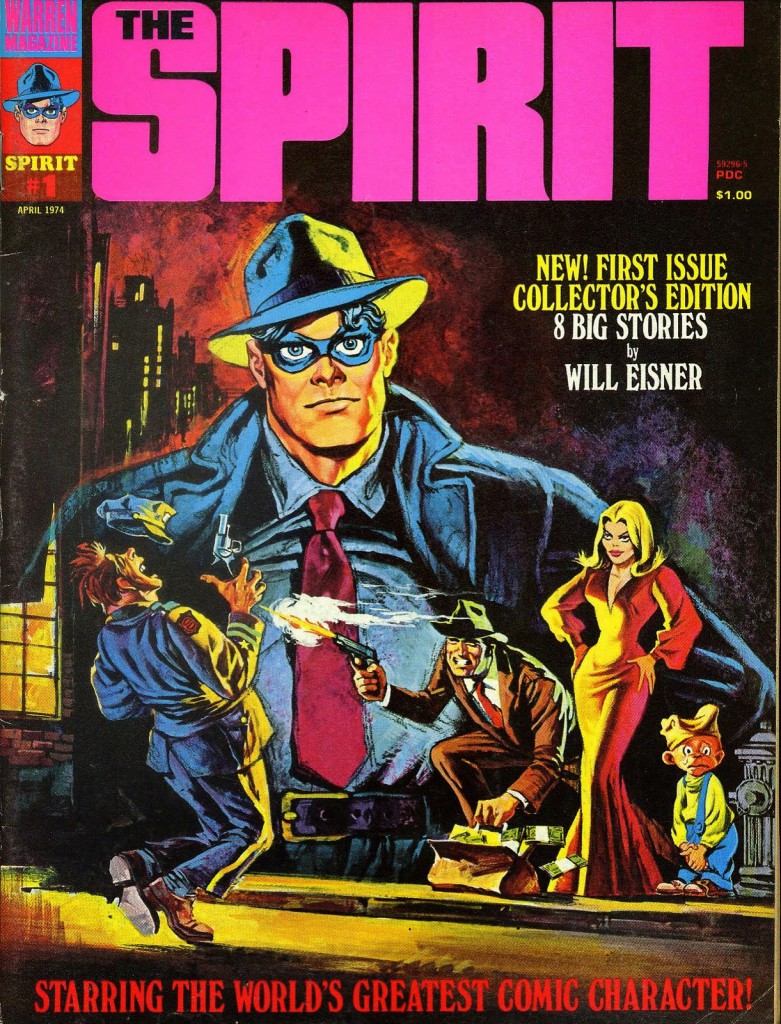 I was bowled over by Eisner’s artistry and sophisticated use of sequential narrative but also by the enormous emotional punch these stories seemed to pack into a brief 7 pages.

Whether it was humor, romance, pathos or irony, I found a depth of character and resonance that seemed to be missing from the mainstream comics of the day.  I can honestly say The Spirit changed my perceptions of a comics creator and made me consciously aware of the artistry involved in rendering these tales. I’m a comics artist and writer today because of Will Eisner and The Spirit.

Is Dan Schkade the main artist on the book? Will you be drawing any issues or covers? 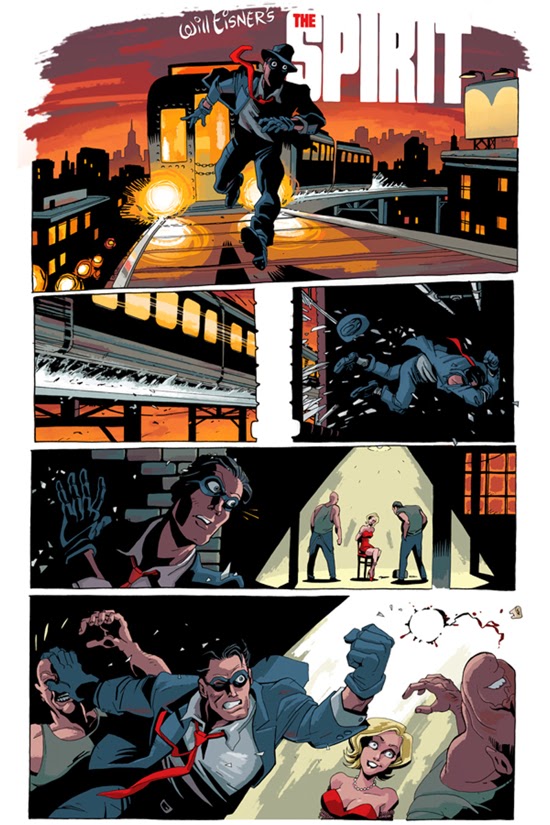 Dan is the main artist. I did a variant cover for the first issue but that’s pretty much the extent of my pen-and-ink contributions to the series. But, as with every project I’ve done for Dynamite (and most all projects I do these days), if I’m not drawing it myself, I act as the series’ Art Director.

I’ve gotta say…we went thru quite a lot of possibilities before settling on what I thought was the right look for the project. We had samples done by many, many artists who were incredibly talented…but just too grounded in the high-realism, action style that’s so popular these days.

The Spirit demands a lighter tough than that; not all-out cartoony, but with a sense of simplicity and style; an almost animated quality.

Dan’s a young, up-and-coming talent and his simple style and bold graphics really combined to bring the right mix that we’d found missing in so many other contributors. And yeah, I’m working closely with him on pretty much every aspect of the book.  Since he lives here in Portland, we’ve actually been having once-a-week get-togethers since out production on the series began.

In fact, we had lunch with my son, Brennan—who’s also the series’ colorist— just yesterday and then rendezvoused at Brennan’s studio to lay-out Dan’s art for the first issue on a large conference table. Dan and Brennan make a terrific team who are totally in sync, creatively.

It’s all turning out terrific and I’m anxious for people to see it!

I also can’t think of a better cover artist than Eric Powell! Wow, the Dynamite people are really into getting this thing right! 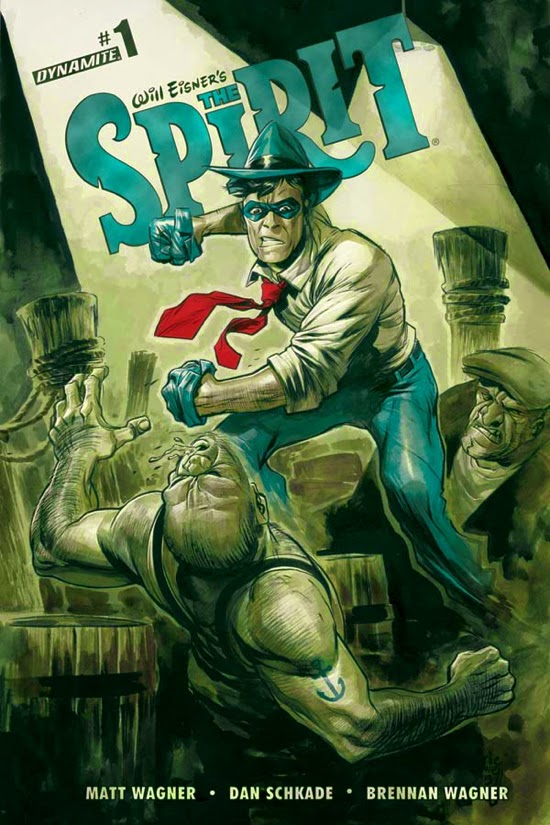 Eric was actually my suggestion.

He and I have been pals for quite a long time and this seemed like the perfect chance to engage in a bit of collaboration.

Plus, as you mentioned…he just fits the material so, so well.

When I first emailed him about possibly coming on board as our regular cover artist, he answered back with a very large “YES!”

What is your motivation for setting The Spirit in the 1940’s? Was this to separate this from the DC run?

I tried to stay away from other incarnations of the character. I basically stuck to the original material.

I checked out Darwyn Cooke’s first collected edition from DC but only long enough to realize that I didn’t want to continue the modern setting scenario. I thought that was a valiant effort and can see why they attempted it, but I’m pretty firm about grounding classic pop culture characters in the time frames in which they were created.

So, my story arc takes place in the late 40s, after The Spirit has been operating in Central City for some time.

I haven’t read any of the other versions by other creators nor have I seen the Frank Miller film. I didn’t want other artistic visions muddling my own take on the character and narrative. So…I went back to reading the Eisner material that had so inspired me in the first place.


Are there any special challenges, as a writer that the different timeframe sets up? Of course we loved Green Hornet: Year One for the classic pulp feel!

Well, it should be obvious that I like writing things set in a historical context and, yeah…that pulp era really tends to turn my on, seeing as how I also did a lengthy stint in that realm for The Shadow: Year One and, reaching further back, for Sandman: Mystery Theatre as well. 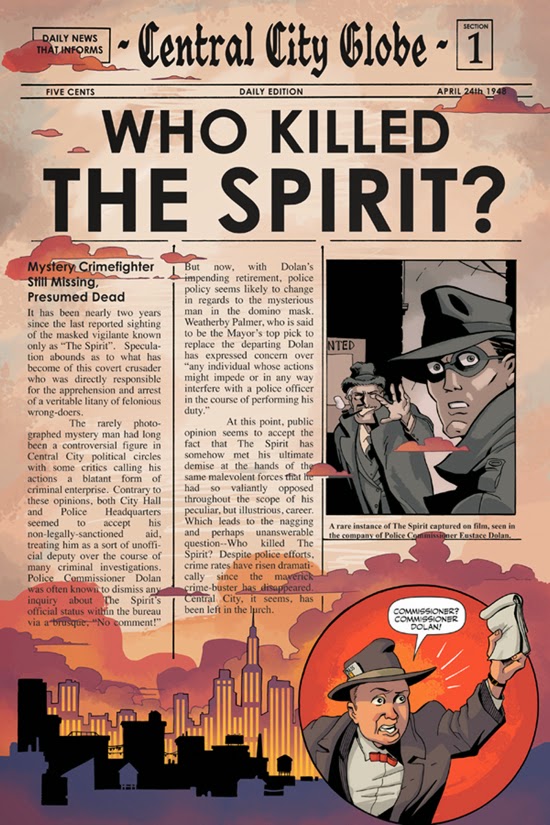 Those “challenges” you mentioned are actually fun for me! And let me point out, this setting is different from those other series we mentioned. The Spirit’s adventures of the late 40s (the golden age of the strip) are quite informed by Eisner’s own experiences after shipping overseas for WWII.

The scenarios are a bit more worldly with The Spirit often going on jaunts to exotic locals…usually in pursuit of some dangerously sexy Femme Fatale!

Do you feel like you are framing these stories by honoring the Eisner legacy, or is this an entirely new take on The Spirit? Eisner fans certainly have their favorite stories and art styles.

Of course, I’m trying to honor Eisner’s legacy…while still adding my own take on the material. Really, I can’t see any other reason to be doing such a project. So far as my particular approach, I’d say that my take is a bit less slapstick that some other versions of the characters…and quite a few of the original stories!

When I first discovered Warren Publishing The Spirit reprints in the mid 70s. I was bowled over by Eisner’s artistry and sophisticated use of sequential narrative but also by the enormous emotional punch these stories seemed to pack into a brief 7 pages. The first two stories I remember reading were Fox At Bay and it’s devastating follow-up, Surgery. These two tales are so crammed full of suspense, danger, pathos, romance and irony…they really blew my 13 year-old mind at the time and, as I said, expanded my perceptions of what this art form can achieve. 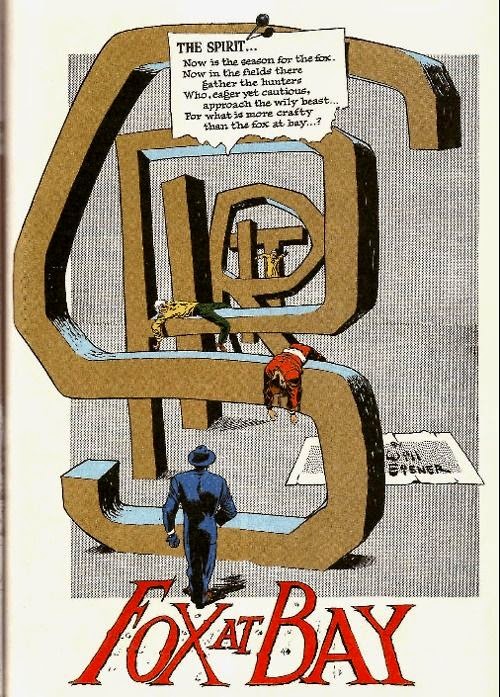 The other way I’m carving my own path year is by doing a yearlong storyline, which goes against the grain of what had always been the province of Eisner’s work on The Spirit—the short story format.

I figured that Will pretty much covered the entire gambit of narrative possibilities in 7 page increments so I decided to go with a longer, continuous storyline to try and strike some new ground in the character’s lengthy history. Additionally, the longer story format gives me the opportunity to both introduce new readers to the characters as well as present all the familiar elements to long time fans.

How involved with the Eisner Estate be in this book, for approvals, ect.?

Everything has to go through them for approvals but they’ve been very accommodating so far. I submitted a several-page outline at the beginning of this whole process that fairly well outlined everything I intended to do with the project and they were totally on board with that.

This is certainly exciting for The Spirit fans with a 75th Anniversary Celebration at SDCC this year. Care to tease what might be in store at SDCC?

So far as I know, Dynamite is lining up a couple of cool signing events, at least one of which involves a special con-exclusive premium. Beyond that…really can’t say. Things are still in progress. 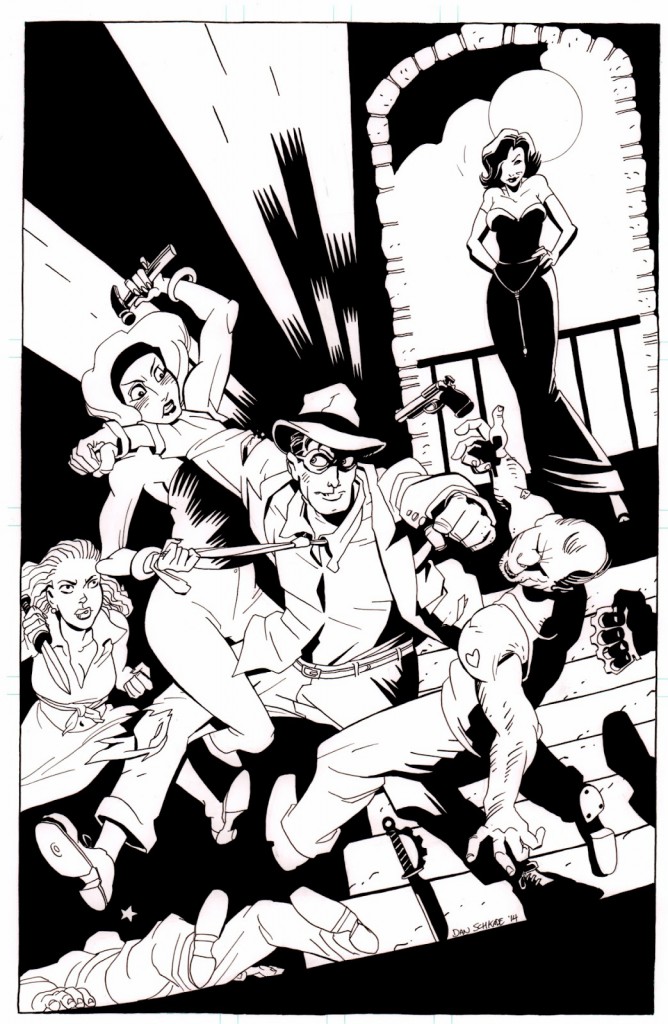 One more — will we see a mix of classic villains as well as new threats? I’m fishing here for The Octopus to appear.

I think you need a net to fish for octopus…

But, like I said…I’m trying to honor Eisner and The Spirit’s lengthy legacy and bring something significant of my own creation to the drawing board as well. 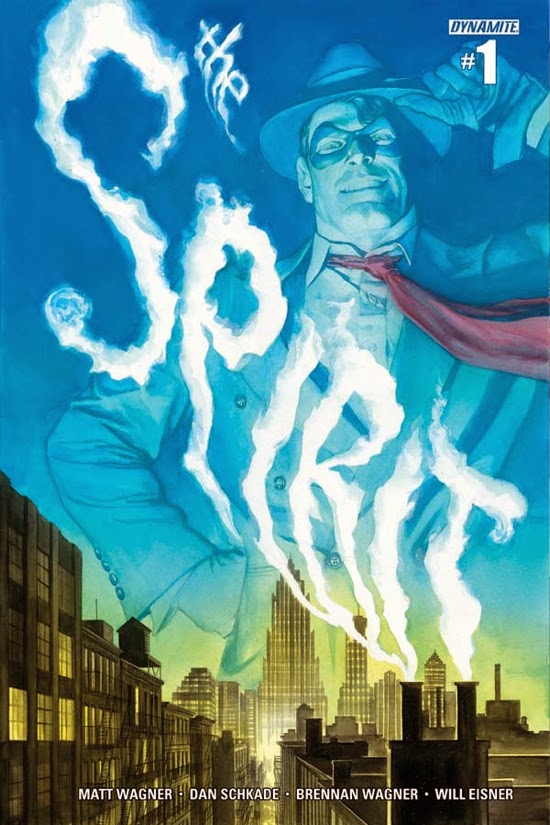