The third issue of Chilling Adventures of Sabrina continues on its dark path, this time introducing the concept of the Unholy Baptism to the saga.

Scribe Roberto Aguirre-Sacasa uses the opportunity to play with the witch mythos that lies at the heart of the tale.

Given the chance to recreate the rules of witchcraft and its players, the comic toys with the concept to create a story arc.

For example, witches are not necessarily born, they tend to homeschool in the early years, and they lay off the carbs in favor of crickets and spiders.

We find out that Sabrina Spellman isn’t quite full witch yet.

Due to a few deaths by fire and stones in the past, the witches’ council opted to have magic users choose their own path at age 16. 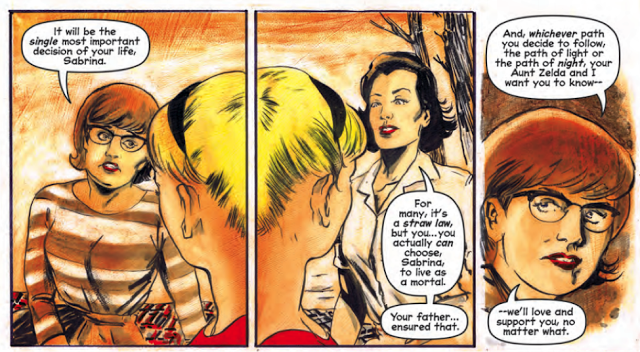 Since our heroine is still at the tender age of 15, she has yet to choose which direction in which she can live her life.

As a mortal, she’ll be forced to age and decay like most folks, but have a chance at true love, or she offer herself and her services to Satan and stay hot and powerful for all eternity.

We also find out that much like Klingons, witches can’t cry. No word on their love of prune juice yet.

As for the story arc, Madam Satan is setting up camp in Sabrina’s life as a teacher and head of the drama department. This allows her to keep an eye on comings and goings of the white-haired teen.

And while unseen evil forces are gathering against Sabrina, the pressures of a normal high school life are also coming into play.

Turns out, Sabrina’s boyfriend wants to make a woman out of the half-witch on her birthday, which apparently is a no-no in the witch community, which has rules about defiling spooky lady parts before the age of consent.

Given Harvey’s inability to go the distance with Lady Spellman, Madam Satan uses to opportunity to feed off the boy’s insecurities and send him on a fool’s errand into the woods where Sabrina must decide her fate.

As the series continues down its dark path, death and destruction are definite fears that are in play for our hero. The comic is completely successful in creating a slow burn, as it carefully releases small bits of info to the reader, then allowing that information to successfully play out in the storytelling.

The horror in the comic lies not with sweet Sabrina, but with the monsters she must deal with on a daily basis: her seemingly loving aunts who have a taste for human flesh and a love for murder; her nemesis Madam Satan, who stole her Cruella-meets-Bettie Page looks from a sleeping camper; the teenage girls at school who are teenage girls, and are therefore the worst of the bunch.

Aguirre-Sacasa and the gang do a bang up job of creating a world with danger lurking around every corner, and at the center, placed a character that most readers can identify with: an unsure teenager.

The ongoing use of a warm color palette throughout the pages invokes a forever fall tone. Mixed with the retro look of the comic itself, Chilling Tales consistently feels like Halloween will always be right around the corner. In this particular case, it is.