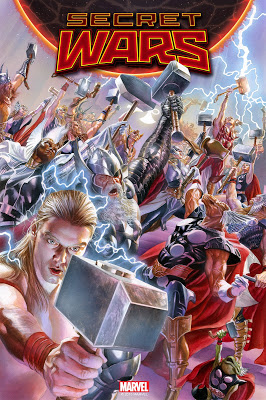 Enter Battleworld, a new plane of existence somehow created in the wake of the Marvel Universe being destroyed.

It’s a crazy dark place where the characters we know have new lives and have taken on radically different roles. A seemingly medieval symmetry encapsulates the motif and lifeblood of this realm.

Various families and houses squabble, politic, and plot to expand their dominion under the watchful eye of one supreme monarch.

While there are certainly no songs of fire and ice, I got the impression that winter is coming.

Despite the comparison, Jonathan Hickman very much makes this his own by placing key components and characters in the right situations while giving a voice to the world around them. The fact that this isn’t just another multiverse scenario with different versions of characters being thrown together is refreshing because the creative process isn’t handcuffed by what’s already been established through decades of continuity.

At the heart of it all is one Victor Von Doom who has gone from being an evil doctor to now being the lord almighty himself. Let that simmer for a moment. On the surface, he’s just an egomaniac obtaining absolute power, but when you peel back the layers, this is a dangerously cerebral individual with a god complex, and now his wish has come true.

One of the great things about Jonathan Hickman’s storytelling is the world building that takes place within his pages. Introductions to new plot points feel like we’re meeting an old acquaintance of sorts. The other side of the wall known as The Shield is home to uncaged horrors such as symbiotes.

Esad Ribic is truly a visual maestro whose illustrations tell as much of the story as any word balloon. Just seeing Doom’s arsenal alone is scary and beautiful at the same time, while the head chopping action scenes are amazing to watch unfold.

Secret Wars #2 has so much going for it as the status quo has been replaced with a new order of things. It’s only a matter of time until someone challenges Doom, but I have no earthly idea how anyone can oppose him, much less win. It’s not just the fights that are going be interesting, but how the areas of Battleworld interact with each other that seemingly makes this deep story full of endless possibilities. 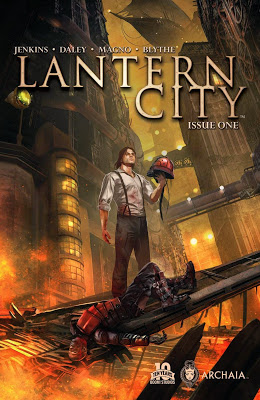 According to a Google search, “Steampunk refers to a subgenre of science fiction and sometimes fantasy-also in recent years a fashion and lifestyle movement.”

Besides that definition, the only thing I really know about this geeky trend is that goggles and hot air balloons are very much in style.

Even with a limited understanding of steampunk, Lantern City shows no limit of imagination and intrigue.

It’s a shame that this beautiful world is infested by a corrupt caste system.

It’s almost easy to push aside if you get caught up in the splendor of its gorgeous esthetics.

The lead protagonist, Sander, knows this all too well as he longs for a life at the upper levels of the city, instead of toiling in its bowels. “The actions of one are the actions of all” is the motto, the unfair creed that is forced upon the less fortunate.

Paul Jenkins and Matthew Daley hook the reader from the very first page, as a harmless musical melody during a hard day’s work brings about the unmitigated wrath of the red clad guards. Suddenly, reprimand comes in the form of a beating that could be the end of one’s days. With no resolution in sight, revolution becomes the language of the people.

As I mentioned before, this is a gorgeous book and credit goes to both Carlos Magno and Chris Blythe for creating such an illustrated delight. The pencil work exudes fine detail in every panel. Colorists very often don’t get enough credit for their contributions to the comic book medium. Blythe’s work here is a prime example of how coloring augments the artistry on the page.

There are some first issues that are merely one hot wonders while others completely miss the mark. Lantern City hits the bullseye with its eyes closed due to its great script, stunning visuals, and enthralling premise. With the promise of much more to come in the story, the second issue can’t come soon enough. 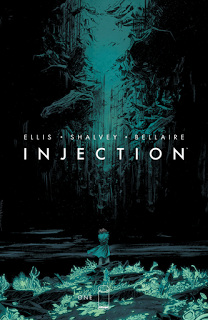 Warren Ellis is someone who will often test the limits of one’s reading comprehension as it’s the little things in every crevice of the story that makes things interesting. The premise of Injection centers on several individuals who poisoned the 21st century.

In some ways, the official synopsis explains more than the issue itself as we are given a lot of information without context.

The story opens when we see a woman named Maria Killbride in what appears to be a mental hospital. She is confronted by another woman named Control who works for a bunch of different acronyms.

Control wants something from Maria which is intriguing since is shows a level of desperation considering Maria’s current residence. Declan Shalvey did a great job of conveying how tired and frustrated Maria is at the whole situation. It’s not clear what Control wants, but Maria knows, and that is enough to keep me interested.

There are others characters who are introduced and will play a pivotal role in things to come even though we don’t know what part they played in the events stated in the press release.

The character work of Declan Shalvey carries an emotional gravitas that is pronounced with facial reactions, body language and posture. Robin Morel looks down in the dumps, and a stole in the woods brings about an offer from a suit working for another mysterious acronym. Again, we don’t know what is exactly being offered, but Robin wants no part of it.

Overall, I like this book and you should give it a chance. However, I can’t put my finger on it, but there is something that leads me to believe that this first installment could be the best this story has to offer. The narrative is going to have to produce something worthwhile so the no-context order of things doesn’t get old too quickly. 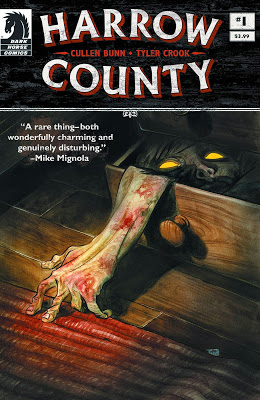 You just know that a comic book is going to work when you feel that eerie chill with each turn of the page.

Cullen Bunn is no stranger to the supernatural order of things and presents a horror tale that oozes fear.

Harrow County is described as a southern gothic fairy tale, however, that phrase simplifies it’s description.

The tone is set by artist Tyler Crook from the very beginning as the town puts a witch to death, and her actual passing is the stuff that nightmares are made of.

The dark and stormy affair was drawn with frightening conviction as I felt as rained on as the county folk watching the proceedings.

Cullen Bunn doesn’t just make things scary, he also inserts some charm into the narrative as we meet a young lady named Emmy who’s innocent nature is evident with a caring heart for those on the farm who are suffering. Her father played a part in the witches execution, and it appears that she will have to suffer for it in some way. It’s predictable, but that doesn’t matter because everything is so well realized.

Bunn’s writing is enhanced by Crook’s amazing artwork in this folk-inspired yarn. That’s not to say that The Sixth Gun scribe doesn’t hold his own in the ring of creativity.

In fact, Bunn’s ability to turn the horror volume up at precisely the right moments helps this book obtain the desired result of something special that firmly belongs in the must read category. 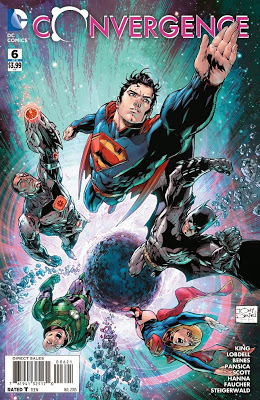 For the most part, Convergence has been nothing more than a half-hearted excuse to once again reboot the DC Comics universe while using that tired old crutch called the Multiverse.

The utilization of characters from the past ultimately shows the failure of the New 52.   Seeing the post-Crisis Flash/Wally West and others is a clear statement that is used to better.  Superman giving some much needed advice to boost the spirits of Earth 2 Dick Grayson was an inspired moment that the current New 52 incarnation could never pull off.

Besides ranting about the past and the present, I should inform you that Convergence #6 breaths some new life into this series as the heroes finally figure out that instead of fighting each other, that need to work together in order to defeat Deimos and perhaps save their worlds.

The meeting of various heroes and villains finally reveals the overall scale of this conflict which has been missing since its inception. Scott Lobdell and Jeff King bring a tide shifting sense of peril and excitement as the New 52 characters enter the fold. While myself and many others prefer their predecessors, they are fixtures of “our universe” and that on its own accord raises the stakes.

There is a lot of fighting that goes on in this issue, but the illustrations are inconsistent and display an arbitrary presentation that does very little to enhance the story being told. However, seeing multiple versions of The Flash working together was a real treat that shined the spotlight on why this character is so revered, highlighting his heart and perseverance.

DC Comics has had so
many Crisis-level events, that it’s hard to create a standout story with
essentially the same old song and dance.

Overall, I’m not feeling
Convergence, but this issue goes a long way in hopefully making this
event something special, or at least memorable.