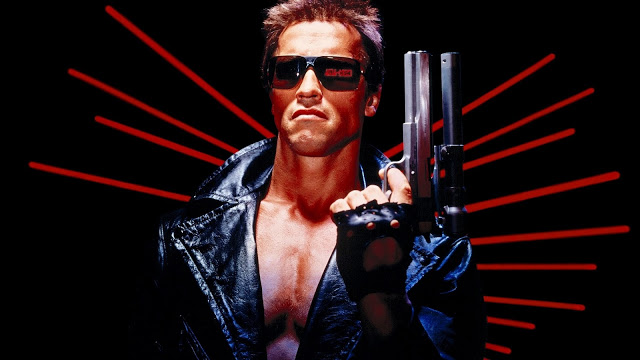 Terminator: Genisys is currently in theaters and fans of the franchise have been eager to bear witness to the latest action unfolding in the lives of the Connor family and associates. We feel like it’s a good opportunity to share some of the more interesting behind-the-scenes facts about one of the most famous and lucrative science fiction sagas of all time.

For folks seeking a recap on the time-weaving narrative of the series, we suggest checking out the informative Terminator: Genisys timeline detailing the highlights of each installment.

It’s an exciting, ingenious, and overall interesting plot line for those among you who have never seen the films. For everyone else, it’s probably still worth it to brush up on the story arc.

Meanwhile, here are some interesting stories from behind the camera:

1 – Arnie originally referred to The Terminator as “some s*** movie”

A reporter interviewing Arnold Schwarzenegger on the set of Conan: The Barbarian noticed a pair of punk-style boots among the actor’s costume array, which seemed out-of-place. When asked about the boots Arnold answered they were for “some s*** movie I’m doing.” They were part of his costume from The Terminator which Schwarzenegger was shooting alternately at night.

Producers tried urging The Terminator writer/director James Cameron into casting former NFL running back turned actor O. J. Simpson. This was over a decade before Simpson would be put on trial for double murder and found not guilty by a jury of his peers. So why did Cameron opt to pass on Simpson? He thought the football star wouldn’t be believable playing a cold-blooded killer.

3 – Actor Robert Patrick was faster than the T-1000 terminator he portrayed in Terminator 2: Judgment Day

One of the more famous chase scenes of the franchise occurs when the T-1000 played by Robert Patrick pursues John Connor played by Edward Furlong through a mall parking garage. The T-1000 gives chase on foot but can’t keep up with Connor who is on a dirt bike.

In real life Patrick kept catching up to the dirt bike and was told to slow down his pace.

The T-1000 takes Sarah Connor’s form in an attempt to lure John Connor into a trap. Instead of relying on camera trickery or CGI (expensive at the time) filmmakers benefited from actress Linda Hamilton being one half of a pair of identical twins.

In fact the production utilized twin actors for all of the T-1000 shape-shifting sequences requiring duplicates.

5 – Arnie’s accent was meant to be explained in Terminator 3: Rise of the Machines

Fans had always wondered why an assassin robot of the future sent back to Los Angeles circa 1984 would have an Austrian accent. It’s “explained” in a deleted scene from the third installment of the film franchise, where we learn the human inspiration for the T-800 had a Southern drawl its creators wanted to remove and replace.

6 – Arnie paid for an action sequence in Terminator 3: Rise of the Machines originally deemed too expensive to shoot

Terminator 3: Rise of the Machines includes a sequence where the T-800 is thrown through a building on a wrecking ball. It’s one of the film’s most famous action sequences, and it almost never got shot due to budget constraints. Schwarzenegger stepped in and paid for the scene out-of-pocket.

It’s a twisted tale worthy of its own article but the short of it is that two aspiring Hollywood producers with no released title to their names managed to get a hold of the rights to the Terminator franchise in early 2007. However it was mostly in part to suspect practices which led to the two nobodies losing the rights as fast as they gained them during the making of Terminator: Salvation.

Unlike the previous two installments to the franchise he created, James Cameron has come on the record endorsing the latest Terminator film. The part-time deep sea explorer has said he thinks of it as the third film in the series.

This of course suggests he disregards both Rise of the Machines and Salvation altogether.

Well there you have it. Eight facts about the Terminator franchise you may not have known about.

Hopefully you learned something. Hasta la vista, baby. But don’t worry. I’ll be back!