A remake of Logan’s Run has been in the works forever and it’s one movie that no one can protest being remade. Because, if you haven’t seen the 1976 sci-fi flick recently, it’s TERRIBLE. The concept – a society in which no one is allowed to live past 30 – is still great, but this execution is embarrassing on every level.

I recently showed it to a friend who had never seen it, warning her that it wasn’t great. But, rewatching it for the first time since I was a kid, I was shocked to realize just how utterly, utterly awful it is. The highlight of the film is the scene where the group of masked and cloaked 30-year-olds take their place on the Carousel of Death.

From there, it’s all downhill.

Nearly everything about the film is ridiculously bad from the shoddy special effects – which, incredibly won an Academy Award – to the subpar acting.

When you consider that Star Wars came out just the next year, there’s no excuse for its embarrassing datedness. Of course director Michael Anderson is no George Lucas, but still…

Anderson, who was nominated as Best Director for 1956’s Around the World in Eighty Days, also directed the famously awful 1975 Doc Savage film, but at least that’s tongue-in-cheek.

Logan’s Run is a giant step backwards from sci-fi movies that came before it.

Compare it to the visionary 2001: A Space Odyssey or Planet of the Apes, both made in the ’60s, or Lucas’s similarly themed THX 1138, from 1971. Heck, even Woody Allen’s Sleeper has aged better!

Great science fiction movies – like the original The Thing, The Day the Earth Stood Still or The Incredible Shrinking Man — still hold up today, because they created a self-contained world that transcends the era in which they were made. Even if some special effects are now dated, if a sci-fi film does its job, we barely notice because we’re so caught up in the universe of that film.

Unfortunately, Logan’s Run plays like a sub-sub-sub par episode of Star Trek (which predates it by more than 10 years) or Buck Rogers in the 21st Century, TV shows that made the most of their limited budgets. Whatever the budget was for Logan’s Run, it wasn’t nearly enough. Every long shot of The City and its Disney-like monorails is, of course, in miniature, but little effort is made to make it look at all realistic. 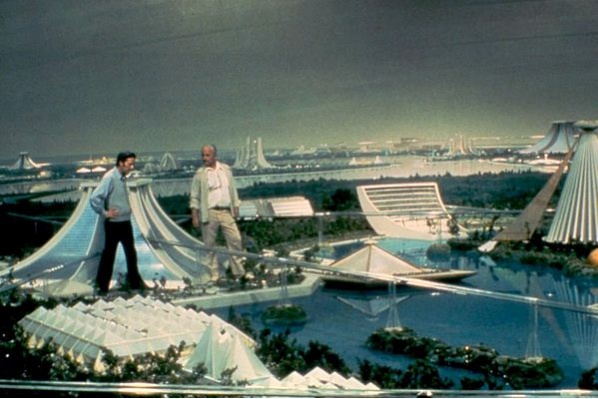 The hairstyles are thoroughly ’70s, most notably Farrah Fawcett-Majors sporting the same famous hair she did in Charlie’s Angels, which debuted the same year. Harrison Ford’s feathered-hair was recognizably ’70s as Han Solo, but at least Star Wars gave Princess Leia a non-contemporary hairdo. Imagine her with a Farrah flip!

The wardrobe in Logan’s Run (someone named “Dick Butz” shares credit) is extremely unfortunate: Nearly everyone is dressed head-to-toe in red or green, which makes the whole film look like a Christmas play where there are far too many elves. 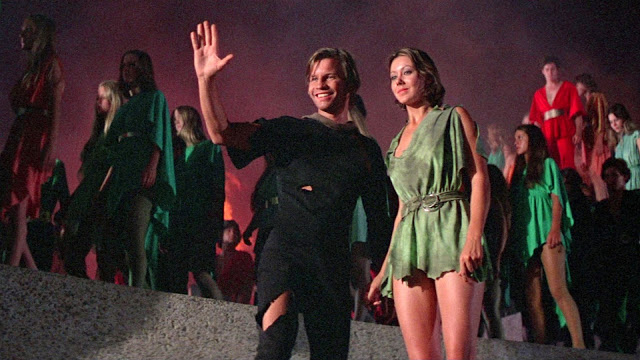 And the fact that tights are the fashion trend of the future makes the whole movie resemble a Broadway musical without any music.

When Logan encounters teenagers that are living off the map (and planning to opt out of the “Die by 30” rule of law), the bright colors and carefully tailored “rags” make them look like missing Lost Boys from some stage production of Peter Pan. Yes, perhaps they were going for a Peter Pan allusion since these are children who never want to grow up. But instead of thinking of these children’s futures, we’re waiting for them to burst into song or a synchronized dance.

Did I mention this won an Oscar for Best Special Effects?

It’s the first film to use a hologram, which was apparently impressive at the time. But the tech of the future is, according to this movie, horribly clunky. The Sandmen (the guards who shoot runners who refuse to die on the Carousel), have lame rayguns that shoot puffs of smoke like misfiring muskets.

Why not laser guns, especially since we see lasers in the plastic surgery scene? Instead the Sandmen are stuck with duds that seem to never hit their mark. Or they’re all just terrible shots.

My friend I  watched the film with argued that he’s a better film robot than C-3PO. Whom she calls “CP30” so you’ve got a good idea of her geek cred. Nonexistent!

The best things in the film: Richard Jordan, who’s clearly acting in a different, far better film as Logan’s more dedicated Sandman and best friend. And Agutter manages to keep her dignity throughout, even while topless. There’s some fun in watching laughably dated retro-future tech (a giant wall of computers and flashing lights, ooh!), but that quickly grows thin.

I’m not sure how old I was when I first saw this but watching it again, I realize I must have seen an edited-for-TV version. I didn’t remember the “sex club” scene at all, or that Agutter is (briefly) topless. What I remembered was the Carousel of Death, the “New You” makeover salon (where Farrah works) and the end where they meet the Old Man (Peter Ustinov) outside The City. In between, there is a whole lot of ridiculous nonsense I had no memory of at all. 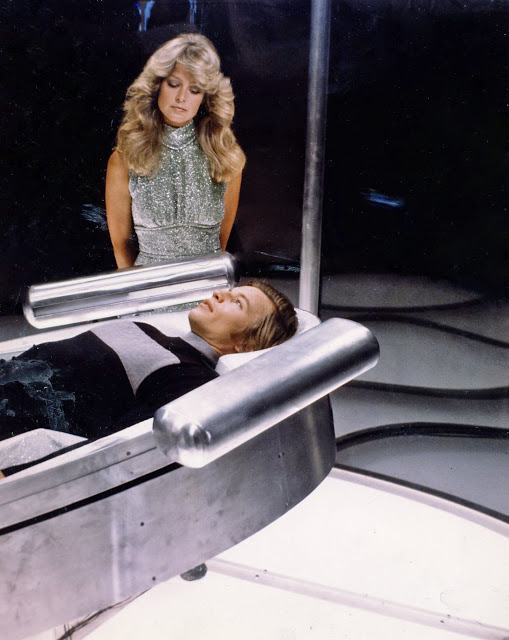 Somehow I had the idea that everyone was constantly changing faces in The City, instead of the one brief visit to New You we see in the film. Perhaps I saw some of the short-lived TV series? Or am mixing it up with another (better) sci-fi film?

It currently has a 6.8 rating on IMDB and 67% user rating on Rotten Tomatoes. When I went to rate it, I saw I’d already rated it a 7! Obviously, that rating was based on my fairly rosy (and incredibly inaccurate) recollection of the movie. I submit that the only reason the film has such a high rating is a similarly misplaced nostalgia among people who remember it as being halfway decent. Or people who simply enjoy ultra-cheesy movies. (I prefer the out-and-out campiness of Flash Gordon, myself.)