There are two events, one positive and one negative, that precipitated my review of the much maligned 1976 dark comedy, Mother, Jugs, & Speed.

Extremely negative is the recent damning evidence against Bill Cosby, the titular “Mother” of the film that I am reviewing here, a fellow Philadelphian, and my comic hero whose self-admitted criminal behavior has broken my heart. And on a separate positive note, is the complete Robert Altman retrospective that is currently being mounted in my former town of Boston at The Harvard Film Archive that many of my dear friends are now enjoying.

Why Altman you may ask?

I will theorize that somewhere in the mix of 70s subgenres, is a rarely discussed collection of films that stem from the success of Altman’s game-changing counterculture film that began the decade, M*A*S*H, that I will define as “workplace” films.

You remember this seemingly endless flow of films that feature a group of irreverent misfits that are all stuck in a job whom you feel real empathy for and are always trying to get one over on the man. A wide array of films from the successful Blue Collar to Car Wash and ending somewhere around 1981 with Underground Aces, an epic flop starring a young Melanie Griffith, about a group of wacky employees in a hotel parking garage in LA. Yes, by that point Hollywood must have ran out of every conceivable place of employ to stage a workplace comedy. At least that film had a kicking theme song from Lionel Ritchie-led Commodores that one-ups the messy soundtrack of the even messier scripted Mother, Jugs, & Speed.

In the middle of America’s finest decade of film making, Peter Yates, who had just come off the success of directing Barbra Streisand in For Pete’s Sake, and Robert Mitchum in The Friends Of Eddie Coyle, decided to throw his hat into the ring of “workplace comedies” with this tale of a group of bawdy Los Angeles ambulance drivers who seem to have an unlimited amount of time to do drugs, mess with each other, pull pranks on their chief competitors, and even buzz a few nuns crossing the street for a quick laugh. 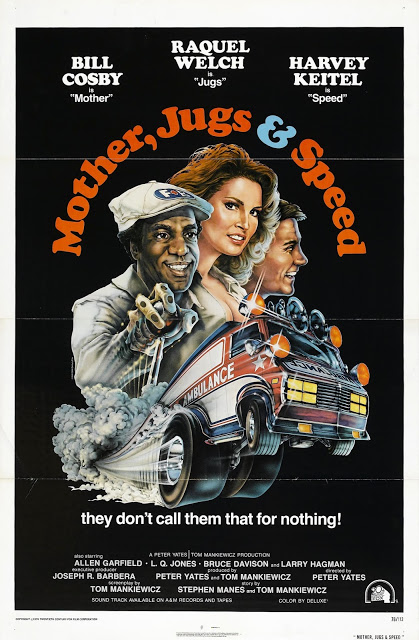 Watching the nuns scatter at the sound of an ambulance siren is the main joy of “Mother,” a beer-swilling, message parlor visiting meat wagon driver played by Cosby who per usual manages to be part of these bad goings on without uttering a blue word.

This should come as no surprise as Cosby even made a couple of blaxploitation films during that time; Uptown Saturday Night and Let’s Do It Again, that similarly to Mother, Jugs, & Speed received a PG rating. So, unlike our friends at the 4077th, the hijinks committed by our band of upstart paramedics are a bit toned down. Upon my third viewing of this film, I wondered if more than a few urban workplace appropriate expletives would’ve made it into the final script if Gene Hackman (Yates’ original choice for the role of Mother) had accepted Cosby’s part before filming began.

Added to the cast is Harvey Keitel, who that very same year had his pimpish hand off blown off in a whorehouse by Travis Bickle in Taxi Driver. Keitel plays the soft-spoken “Speed,” a recently suspended cop and Vietnam Vet who may or may not have sold amphetamines whilst on the job, hence his epitaph.

Lastly, there is “Jugs,” played Raquel Welch, who does her best uptight feminist “Hot Lips” Houlihan imitation. “Jugs” never dates the drivers, much to their chagrin, as she spends every night going to school to get her EMT license. She brandishes her license one day at work but has no chance of actually driving a wagon as her boss, Mr. Fishbine (Allen Garfield at his uptight finest) is not going to put a woman out as a paramedic.

No 1970s genre film is complete without an ex-football player/actor and here we get Dick Butkus as the cowboy hat wearing “Rodeo,” think a physically larger but similarly racist Duke Forrest from M*A*S*H, and finally to stay on the M*A*S*H target, we have the film’s heavy, Murdoch (Larry Hagman) who fills in for Frank Burns as the womanizing and boorish workplace dickhead. There is some real acting talent here and to imitate the character’s idioms from M*A*S*H is a venial sin, but where the wheels really come off on Mother, Jugs, & Speed is the script and Yates’ direction, which reminds us as to why Altman’s 1970 film is considered the masterpiece that it is to this day.

Altman had the gift in M*A*S*H of balancing some of the funniest moments captured on film with other moments of real drama and even a bit of viscera. Altman’s comic timing is perfect in M*A*S*H,  and it makes the overall experience into a gem.

Mother, Jugs, & Speed supplies us with many decadent, funny scenes that keep my attention when the film runs on late night cable, but these scenes are awkwardly pressed up against a multitude of poorly framed moments of pathos. Case in point is the scene where Mother’s ambulance partner, Leroy, is murdered by a crazed junkie who wants a fix. 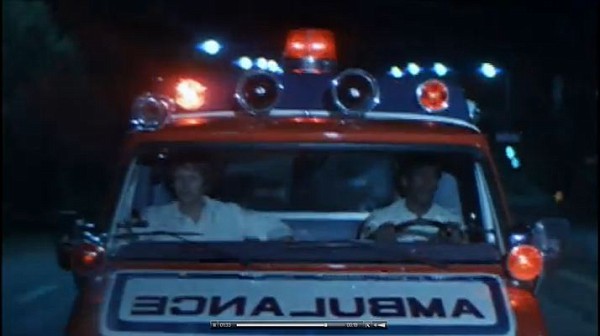 It’s a real and tough scene, but Yates immediately follows that scene with a comedic scene that just does not fit, negating any feeling the viewer has towards Leroy’s death and the laughs of the next moment.

There are countless scenes that play out this way in Mother, Jugs, & Speed, and after a while, you just lose your taste for the film as you wait for inevitable laugh after an ugly moment. Unlike many of the workplace films where the moments of tragedy create empathy for the characters predicament at their job, such as Smokey’s ugly “accidental” death in Paul Schrader’s fine 1978 film, Blue Collar, the poor positioning of these moments in Mother, Jugs, & Speed feel too divisive and thus become the film’s undoing. Perhaps it was the low budget of the film had that forced such sloppy decisions.

We now know that Gene Hackman and the original choice for “Jugs,” Valerie Perrine, both backed out due to low salary offers and perhaps other choices were made to cut corners that resulted in this mess of a film?

Sadly, Yates’ film goes down as a sometimes hysterically funny but intensely uneven urban dark comedy whose inability to know what it wants to be stamps out any potential of being a classic in the genre.

A few years later in 1979, Yates would shed the A-list stars and their salaries for a team of then unknowns (Dennis Quaid, and Daniel Stern to name a couple) and master the comedy-drama with the five time Academy Award nominated film, Breaking Away. A modern masterpiece that unlike Mother, Jugs, & Speed is almost eerily intuitive of American working class people’s dilemmas and dreams.