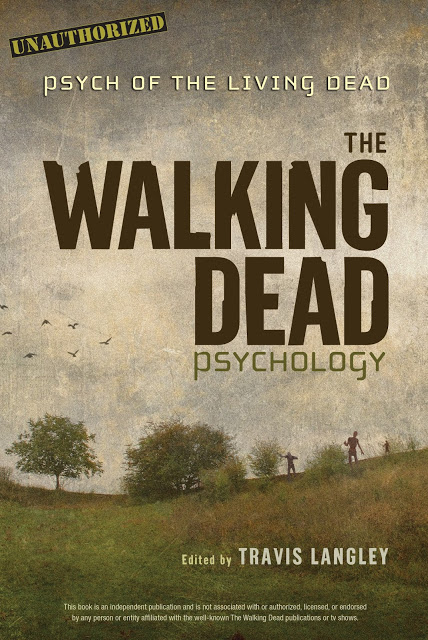 With next Sunday’s premiere of Fear The Walking Dead already locked into my viewing schedule, I’ve already started getting back into the mood by reading this book, The Walking Dead Psychology, Edited by Travis Langley and released by Sterling Publishing.

The characters of The Walking Dead live in a desolate postapocalyptic world, filled with relentless violence and death. In reality, how would such never-ending trauma affect the psyche? By understanding the psychological forces that drive the show’s action, fans can better grasp this compelling fictional universe. Is the Governor a psychopath, a sociopath, or neither? What does Terror Management Theory tell us about what it means to constantly fight for survival—as Rick must? What is the emotional cost of killing a walker or even another living person? What is groupthink and how does it affect the decisions made by the people of Terminus, Woodbury, and Rick’s gang? In 19 essays from a range of esteemed contributors, a foreword by John Russo, cocreator of Night of the Living Dead, plus “Case Files” sidebars by editor Travis Langley, The Walking Dead Psychology answers these and many other questions in a way sure to fascinate the show’s millions of passionate viewers.

One piece in particular, “Why Do We Watch?” by Frank Gaskill, I found to be particularly interesting, and our friends at Sterling were gracious enough to allow FOG! to share it with you.

Why Do We Watch?

We love The Walking Dead. LOVE it! But why? Most readers and viewers do not consider that they are tuning in to a for­mula that deliberately and intensely excites their conscious and unconscious senses, hopes, and dreams. The formula created by Robert Kirkman and the writers of the television series and games provides an audience an experience deeply seated in the biology of violence, the stripping away of our technological existence, and our innate desire for intimate social connectivity. We welcome the simplicity of decluttered lives and a clear and present danger we can confront physically. Walkers offer some­thing tangible we can kill.

Trapped in homes, a farm, a prison, and even the seemingly safe communities of Terminus and Alexandria, the characters of The Walking Dead face an identifiable threat to their existence. We are obsessed with their relationships and their survival. Countless blogs, books, and articles attempt to answer the question “Why do we love The Walking Dead?” The zombie genre and specifi­cally The Walking Dead can seem like the ultimate Rorschach test, allowing us to project our fears, hopes, and dreams onto the meaning of “Why do we watch?”

Do we watch because we want a simplified life with less tech­nology or because we enjoy vicariously feeling the deeper social connections brought on by a common threat? Maybe we just like watching Michonne decapitate walkers. Once upon a time, you might have doubted my sanity if I’d said the world would obsessively watch a show in which a mother asks for a suicidal C-section and to be fatally shot by her own son. But we watch and rewatch week after week, death after death, trauma after trauma. Why do we talk about it at work? Why do we think through our zombie survival plans and contemplate who we might save or where we might go in order to survive?

I believe The Walking Dead. The zombie genre as a whole excites us biologically and awakens an unconscious longing. The walkers clear away what distracts us and exposes not only who we are now but who we might like to become. The zombies do more than provide the mechanism for the story. The zombie apoca­lypse embodies the true definition of apocalypse. The term apoca­lypse is a word generally meaning “a revelation,” derived from the Greek apokalypsis (“to take the covering away”). “Anyone who watches zombie movies must be prepared for a strong indictment of life in modern America.” Romero’s groundbreaking movies provided needed mechanisms to decry societal evils and call out the worst of us, but TWD is not so blatantly a social commentary.

When I think of Romero’s films, I am horrified by the idea of living in the worlds he visualizes. I don’t try to imagine myself in those settings. I usually feel disgust when I watch them (even though I love those films). In contrast, I often imagine and talk with my friends about living in a world similar to that of The Walking Dead. The zombies are just as real; the scenes of violence and gore are often worse than in the most intense zombie films to date. The uncovering process of the zombie apocalypse forces us to examine consciously and unconsciously what is hidden from our view.

In this article:Book Excerpt, Books/Literature, Psychology/Self-Help, Television, The Walking Dead