In the early morning hours of the first day of Long Beach Comic Con, we arrived to a calmly bustling convention center to pick up our badges. After waiting for the opening of the registration booths, we picked up our badges in what may be the easiest and most welcoming experience we’ve ever had at a large public event in all of our years attending conferences, which was a foreshadowing of the fun-packed yet uncomplicated weekend to come.

After opting out of attending the San Diego Comic Con (too many lines and maybe just too much pop culture to digest), we decided on attending Long Beach’s because we hoped for more of a comic focused event, and our decision did not disappoint. Other pop culture forms were certainly represented, with one of our favorites being the impressive display of cars from film and television, including the stand out one for us, Jim Rockford’s Firebird paired with his plaid jacket and even a business card because, let’s face it, the late James Garner was pretty damn cool. With our James Garner/Jim Rockford love aside, overall, Long Beach Comic Con was dedicated to the medium in its name: comics.

Despite the fact that the convention focused on primarily the comic book form, the medium never became too repetitive or boring because it was presented in multiple ways, ranging from the cosplayers (what was up with all of the Poison Ivy costumes?) to collector’s booths of old comics to a massive Artist Alley containing works from new creators to enlightening and entertaining panels about comics of the past, present, and future as well as how to make and distribute your own comics.

Long Beach Comic Con was a full comics immersion, and given the many different parts of making, reading, and collecting them, as reflected by the many different events and booths, it is a challenge for us to list out the highlights, but we’ve collected our top ten discoveries and moments from our first West Coast Comic Con.

Truth be told, we spent a lot of time in the southeast area of the convention floor, known as the Funny Book Fest (more about that later). There was a lot of quality there in the independent, funny comics, but we immediately took a liking to the work of an unassuming and amazingly funny artist and writer named Sam Spina.

We had no knowledge of Sam’s work prior to that morning, but after chatting with him and reading some of his funny and borderline deviant comics later, we realized his work was amongst the best of what we took home from LBCC. We picked up The Frantastic Four, The Complete Tarn, Fight, and Being Myself Is A Treasure.

All possessed a deranged humor that widely vacillated between innocently funny to downright profane, creating unique dialog and characters. We could break down each comic, but all you need to know is , “Mr. Futts- He eats butts,” and that’s okay.

2. The Organization, Efficiency, and Seamlessness of LBCC 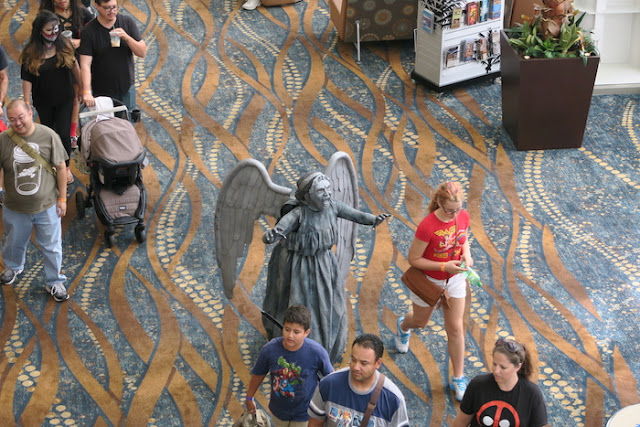 Unlike other comic cons where ambitions supersede the administration put together to execute a successful event for attendees, Long Beach Comic Con was clearly a well planned affair, and this was reflected throughout the ease of registration, entry, timing, and navigation at the convention. Only a few times did the convention floor feel packed to an uncomfortable state, but most of the time you had the space to interact with creators and fellow attendees in a more than quick pitch way.

Isn’t that why we go to conventions after all?

The first panel we attended reflects one of the best recognitions within comics today, the announcement of the Second Annual Dwayne McDuffie Award, named after the thrice nominated Eisner Award comic book creator, which promotes diversity within the comics industry not only by identifying the broad range of characters portrayed in comics but also by acknowledging the variety of creators contributing to the medium.

Submissions are open now for the 2016 award, and keep an eye out for news and further details from the award chair Neo Edmund’s social media channels.

Besides including the aforementioned talents of Sam Spina, an immensely humorous rectangle of tables, united under a Funny Book Fest banner, on the convention floor contained a treasure trove of independently produced comics with a comedic bend.

Hosted and curated by Geoffrey Golden and Amanda Meadows of The Devastator, the Funny Book Fest included the group’s own final volume of The Devastator anthologies, Space Epic, in addition to original works such as Greg Thelen and Marili Ramirez’s Amanda Green: Superhuman Insurance Agent. The Funny Book Fest area of the convention produced some of the most entertaining and exciting new works of the weekend plus a different button created for each table, which we gleefully collected.

Of all of the panels we sat through, none was more comedic and simultaneously informative as what was being thrown out there by Zack Morrissette of the roommate nightmare in the zombie apocalypse novel, The Other Side of the Fence, which was published through Amazon plus CreateSpace, and Tony Donley, creator of Albert Einstein: Time Mason, a series with a clever and witty Einstein who battles against the misuse of science, which was funded through Kickstarter.

In between the jokes and discussions of their works’ content was some enormously useful information about crowdsource funding and the avoidance of pitfalls which may occur when you hope an audience will fund your work. Nicely refereed/moderated by Michele Brittany of Bleeding Cool, this panel not only offered insight into independent publishing approaches but also managed to get the audiences engaged in the creators’ respective works.

Beyond the comic books aimed at adults, the Artist Alley also featured works for children. When reading children’s content as an adult, you always find that the best creations capture the attention of all ages.

Such was the case with Yehudi Mercado’s Pantalones, TX and Robert Goodin’s The Kurdles. Luring adults and kids in with exuberant artwork and tale about the town daredevil Chico, Pantalones, TX includes Texas-spun tall tales and an encompassing joyful western spirit, making it a perfect read for a family.

Beautifully illustrated and colored with a soothing, soft palette, The Kurdles contains a whimsical story about a bear and the fantastical creatures she encounters as they try to save their house from transforming into a hairy monster; it’s an imaginative and lovely book made to be read before a goodnight wish.

Italian national and Long Beach resident Tony Raiola has been the owner of Pacific Comics Club and the publisher of vintage American comics of the 1930s ranging from George Herriman’s Krazy Kat to Alfred Andriola’s Charlie Chan. In addition to these publications, Tony’s humble booth contained original prints from Flash Gordon along with volumes of modern Italian comics from Milo Manara and French cartoonist Moebius.

In the midst of the endless stands selling well-known Silver and Golden Age comics, Tony’s stand is that rarity that makes the convention floor a truly diverse space for purchasing comics that you would have a hard time finding elsewhere.

Hosted by Amanda Meadows, Rachel Dukes, and Keenan Marshall Keller, this highly entertaining, informative, and, at the end, interactive panel opened up the audience to the world of zines in all of their splendid DIY glory.

The history of the medium was discussed as well as the drawbacks that occur when not coming up with a good publishing strategy for your book about hoboing through Indiana that you are trying to produce at your local Kinko’s in the middle of the night. Much appreciated was the informal breakdown of attendee to panel discussion that resulted in a small but happy crowd descending on the front table, who were invited to handle and examine a multitude of amazing and diverse zines brought in by our panelists’ own collections.

9. Experimentation Within The Comic Book Form

A convention should be the place where not only an attendee has the chance to interact with the creators of well known properties but also has the opportunity to discover new innovations within the medium they know and love. A couple of publications emerged from the many aisles Artist Alley of LBCC.

Spurs, a western themed graphic novel by T.J. Troy and Chris McFann, came packaged with original atmospheric country-rock composed to accompany sections of the story. While Spurs does not invent a completely new technique of the medium, it does achieve its goal to extend the story beyond its pages with the combination of music, text, and image in a way that few graphic novels do.

The Shadow People by Nathan Osollo uses the mobile app Aurasma to add digital elements to the physical pages of the comic book. Though the story of The Shadow People is fairly basic, it highlights a new tool that has the potential to enrich storytelling approaches in comic books to come.

Moderated by Madeleine Holly-Rosing, the author of Kickstarter for the Independent Creator, this panel included Siike Donnelly, Ray Chou, and Jules Rivera, three comic book authors who successfully funded multiple projects through Kickstarter. Lighter on the comedy but filled with vital information, this panel offered three different perspectives on running the various elements essential to getting your project funded.

This included one of the better Q&A sessions with the audience in attendance.

An Honorary Mention goes to our dear friend Keith McCluskey, who was attending a completely different kind of conference across town and was kind enough to lend his photographic talents exhibited in this piece for FOG! We are eternally grateful for his company and hard work in helping us with this article. 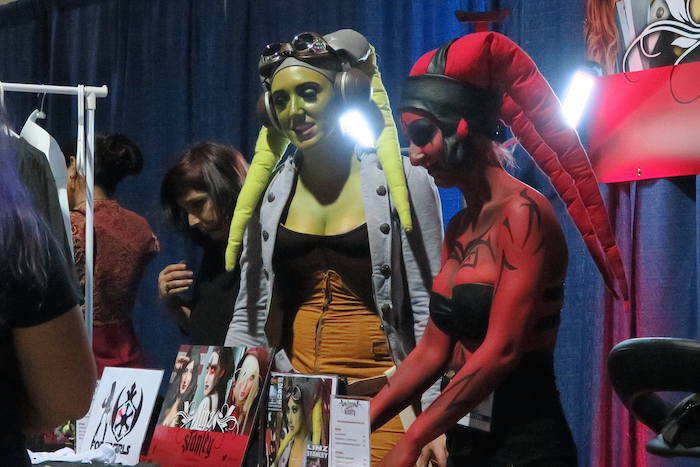