Sorry in advance to my diehard friends. I hope Force Friday was everything you wanted it to be. I hope it was just as glorious as the midnight madness for Episode 1 toys. I very purposely decided to sit this one out.

To be honest, I really don’t like the idea of “Force Friday”.

Am I excited about the new films?

I’m not sure I’ll get through the movie without a therapist and boxes and boxes of tissue.

I can’t wait to get toys and action figures of the characters and ships from the new film… that is if I like the new film and the new characters.

It seems like a very foreign idea in this day and age, but I want to go into this film not knowing much.

And that has been a battle.

I don’t want to know these new characters, which many people are already on a first name basis with, until I see the film. I want to experience their journey and adventure like I did the original films, like you are meant to… when you see the movie.

So I’ve been trying to put myself on a Force Awakens Embargo.

And let me tell you, sneaking out the plans for the first Death Star was probably an easier task. Between social media, the massive marketing power of the Empire… I mean the First Order (I shouldn’t even know this reference yet) I mean the Mouse and the shear understandable excitement of everyone I know… it’s been hard to go into this thing fresh and open minded.

I’m not gonna lie, I was there for Midnight Madness, I walked away with a Jar Jar figure… and man did I regret it.

So yes, I approach this new film and the pop culture surrounding the new film with cautious optimism.

Love J. J.; Loved the Trek films.  If anyone can do this it’s him. But they are taking my childhood heroes and dusting them off after 30 years…

I am cautious. And equally as important or maybe explaining that cautiousness is that I want to believe in the magic of that universe again. And I think the right people are in control to make me believe again. But not when the marketing, sales of merch, and fanboy culture chips away heavily at the magic before we even sit our butts down in the theater to see the film.

Toys, action figures and merch are just as important to the IP (yep I’m referring to it as an Intellectual Property), as the film itself.

I get it. That’s what Star Wars was in my childhood, that’s what made it unique from other things at that time. And for the kids now… you go crazy.

Hope those 5 point articulated figures you scored are just as awesome as the Jar Jar I got for Episode 1. Honestly, for kids, this is awesome.

But for us older kids, with the Peter Pan complex who refuse to grow up… Just like wanting Peter to fly, I want to suspend belief and enjoy the magic of the Force and the magic of those characters that wield it.

Now… I am sorry to everyone in the universe who is about to get mad at me.

Freaking amazing! When I saw that first trailer and that droid was booking ass I thought… hmmm, I guess J.J. is doing some CG after all.

Then I found out it was practical. And my mind was so blown… it was like… like. Well, like being 9 years old and thinking R2-D2 is so real, how did they do that.

He’s so real! I was amazed and it brought me right into this universe again.

Then, Force Friday happened; the pre-film marketing and sales blitz.

Where everyone can get their own BB-8 before the movie even comes out. You can roll him around at home, you can run it in the kitchen, your dog will chase it, its cute.

Well, it is cute. And I’m sure they sold a g-zillion of them in the last week.

But guess what… Now that everyone and their mother has a BB-8, that character in the film isn’t very fascinating is it? It’s just a toy. 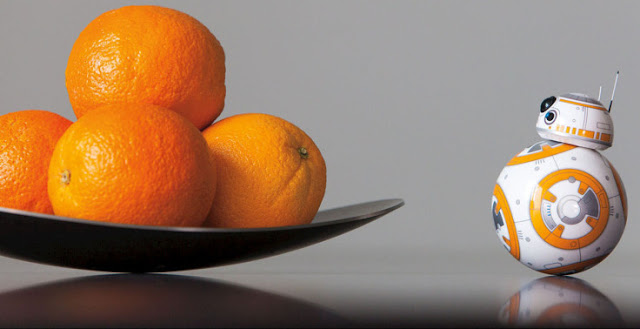 My mind went from being blown to being melancholy. I know I’m not thinking business here… but couldn’t they have released that toy for Christmas, right when the movie came out, or right after the movie came out?

I’m amazed by the technology. I love the look of the new droid. But did we have to mass-produce the magic before we even got to enjoy the magic in the film?

These are the revelations I have about Force(d) Friday. The very blatant cash-grab. I’m still psyched for the new film. I’m psyched to eventually get to know these new characters and buy their toys. I’m psyched for my friends who are already enjoying all this stuff.

But for me, I’m psyched I avoided Force Friday.

See you at the theaters in a couple months everyone!