I wouldn’t be the cineaste that I am today if not for my late sister Rosaria.

As it was the 1970s during most of my adolescence, movies were an affordable route to an elevated state and one that could exalt an otherwise poor family to experience art for short money. One of my earliest film memories was that of my sister, hiding me under her coat so that I could get in to see Bob Fosse’s Lenny when I was all but six years old.

Why, you may ask? Well, she had to babysit me, but it was in its last week at the theater, and she so desperately wanted to see this Lenny Bruce biopic that she felt the need to commit such a desperate act.

I couldn’t recall much when I was asked about the movie from my friend Paul, but I did remember seeing two women kiss one another, which prompted a few questions for my sister after the film that were met with the answer “It happens,” but I couldn’t tell you much more than that.

On top of that somewhat illegal screening experience, my sister and I watched a lot of films together, both in the theater and on television. Such was the case with Richard Brooks’ misunderstood 1977 film, Looking For Mr. Goodbar, which appeared as the ABC Movie Of The Week in 1980, with only a few edits for content.

When it aired, I was the wise-old age of eleven, and I in my overconfident mind thought that I got more out of the film than with Lenny. I mean I was eleven by that point and the reality that I lived in the inner city made me wise above my years, but more importantly, Rosaria was a woman of twenty two, who loved going to the discos, and was the eldest daughter of a working poor Roman Catholic family.

Disparaging words had been said about Looking For Mr. Goodbar during one weekly church sermon as the film depicted a woman who gleefully engaged in promiscuity, rampant drug use, and one the most grievous of sins for a Catholic, a hysterectomy.

By 1980, my sister had long since ceased attending mass and was eager to see to see the film as she, like many women of her generation, had been a staunch advocate of women’s rights. She had missed the film’s initial theatrical run so she was excited when it ran on television. As my dad would be asleep before it aired, and my mom was working second shift, we sat down and watched the film together.

My sister had heard about Roseann Quinn, the murdered NYC schoolteacher who the novel and subsequent film was based on, which added a more somber element and raised curiosity to the screening. It had a profound effect on both of us that night, and since then, I have gone on to be a huge admirer of Richard Brooks’ films, but as the film has never been released on DVD ( I have a battered VHS copy from back in the day), I haven’t seen it in years, and, frankly, I have avoided seeing it because my sister passed almost two years ago. Just the other day, my good friend Mitch forwarded to me a recently uploaded copy of the film, and I felt that I was finally in the right frame of mind to watch it again.

Watching the film now, and understanding the case as I do, Brooks didn’t take substantial liberties with the story, except that the main character of the film is not as hell bent on destruction as portrayed by the Rossner novel. 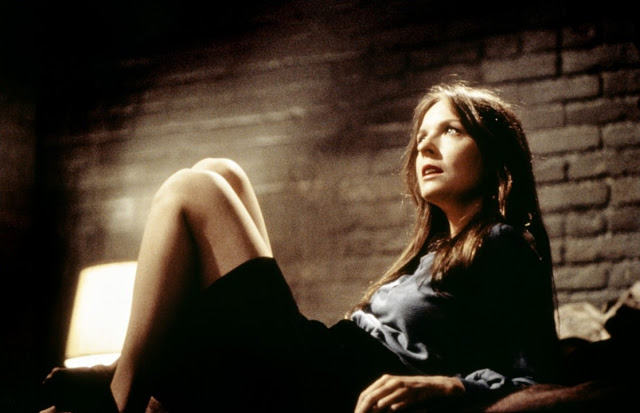 Brooks and Diane Keaton do a magnificent job in presenting Theresa as a woman who is struggling to find her own way in the world, writhing out of the grips of her smothering family, her self-destructive envy of her gorgeous hedonistic sister and daddy’s favorite, Katherine (Tuesday Weld), and the crippling Catholic guilt that she deals with every day. Theresa is a teacher for young deaf students at a NYC school (just like the real-life Quinn) who begins her sexual explorations by having an affair with her over-intellectual married college professor, but that fails to materialize into anything more than a tawdry fling. She leaves her family home to move into the building that was recently purchased by her sister Katherine’s new husband.

She then dates James (an extremely creepy William Atherton) who behaves in a way that most sociologists would call the “good son.” James is an Irish-American welfare inspector who Theresa meets when he appears at the home of Amy, one of her impoverished students who cannot afford a hearing aide. James immediately becomes obsessed with Theresa and infiltrates her family’s home to become a fixture in her life, much to Theresa’s disdain. After another slightly dangerous one night fling with the clearly psychotic Tony, Theresa hits the bars, does some coke, and begins to falter as a teacher. Theresa’s downward spiral goes into overdrive when she begins turning a few tricks with older, unattractive men which also was rumored to be the case with Roseann Quinn.

Again, unlike the book, Theresa engages in these scenarios with a certain amount of fear but still with the excitement of expanding her outlook on life, both sexually and philosophically, and ending the cycle of shame and guilt that she has possessed her entire life. In the film’s final scene, Theresa like Roseann Quinn, has her life taken away when she takes the wrong man home for a sexual tryst whom she meets at a New Year’s Eve party. In the film, but unlike the actual case, this man is portrayed as a self-loathing homosexual named Gary (played by Tom Berenger in one of his earliest roles) who meets Theresa shortly after almost being killed by gay bashers on the street.

True to the real incident, Theresa is brutally stabbed to death by Gary after he fails to achieve an erection.

Much was made at the time of the film’s release that Brooks had crafted a film that served as a precautionary tale and even worse, as an indictment of 1970s feminism, which is why I feel that this film was completely misunderstood when it first was screened.

The normally left of center treatment in most of Brooks’ work would be your first indication that his plan for this adaptation of the Rossner novel was not to condemn women for their new found sexual freedom. If you examine this film carefully, Looking For Mr. Goodbar is more of an indictment of the 1970s male than anything else which was eluded to by my sister as she had said at the time, “Look at the men, she dates. They are the screwed up ones aren’t they, not her?” 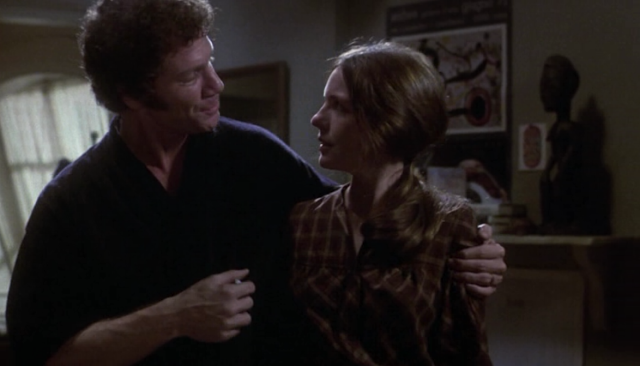 Case in point is Theresa’s first sexual partner, the professor, who despite his intellectual prominence, prematurely ejaculates only seconds after penetrating Theresa. He then throws around clichéd 1970s bravado: “I hate to talk with women I just fucked,” to hide the fact that he is terrified by Theresa’s open sexuality. The character of Tony is what we would now called a PTSD affected veteran, who is more lost than Theresa as he has no idea as to how to function in civilized society. James is a classic “mama’s boy” and a callow liberal who cannot simply sleep with women due to his Catholic repression, and lastly, there is Gary, a violent and repressed homosexual character who would most likely be removed from any current film for his gross political incorrectness. To me, this film is in hindsight a look at the fractured post-Vietnam War American male and not a cautionary tale for sexually liberated women who were finally able to experience free love without the ridicule of the past.

What few negative critiques I offer are in the form of stylistic differences, specifically the use of flashbacks, which act more like filler than anything that truly enlightened Theresa’s inner-self. I feel that those scenes could’ve been replaced with more scenes between Theresa and her sister Katherine, who is the sexual role model for Theresa. Katherine is inserted in some key scenes, but her character was woefully underdeveloped, which is regrettable as her open sexuality could’ve stressed Theresa’s unspoken agenda for freedom.

It is a small critique against an otherwise strong film and Richard Brooks’ last good film as his follow up efforts, Wrong Is Right and Fever Pitch were universally panned and failed at the box office.

It is odd seeing this film now with the knowledge of the life that my sister led until her passing.

When we saw the film in 1980, Rosaria was dating a man named Bobby, who similar to James, was a good Catholic boy with dreams of domesticity, which my sister firmly rejected. Rosaria’s next long term relationship lasted over twenty years, but its abrupt ending led to a sadness which played a role in her death.

True to what she promised me that night, my sister never married because she never wanted a family of her own for reasons that were not too dissimilar from the anti-familial desires of the character of Theresa.

One thing that was always certain for both of them is that guilt is usually too powerful an emotion for goodhearted people to ever fully leave behind.

To this day, I’ve often wondered if that film played a role in that life choice that Rosaria made. And even though I too have left Catholicism behind and feel that the ending for a life concerned with true freedom doesn’t have to end so tragically, as I get older I do sometimes question, like the character of James, as to how much we truly have gained from possessing the freedoms that we desire away from a traditional family.

This piece is dedicated to Rosaria.

In this article:1970s, Growing Up, Movies/DVD, Tribute, Written by Generoso Fierro