Here at FOG! HQ lots of cool stuff comes in, giving us the opportunity to check out some merchandise.

Here’s our thoughts on some of the latest stuff that’s passed through our rigorous testing. 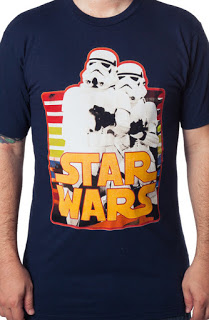 With a design that makes me nostalgic for the days when you’d go into a T-Shirt shop and go through a stack of binders full of transfers to have applied to a shirt, this awesome shirt features two of the Empire’s soldiers ready to cause a ruckus.

Sure, the one in the back might be a little short for a Storm Trooper, but these two guys might be very well TK-421 and his partner TK-422 aka Luke Skywalker and Han Solo as they make their way to the detention level to save Princess Leia Organa.

Officially licensed, this shirt is a must have for any fan of the original films or anyone else counting the days to the release of Episode VII.

Like Ernest Hemingway, Frank Costanza is a man of wisdom and action.

Whether his outbursts lead to enlightenment or violence, Costanza is prepared to defend his beliefs and encourage new ones, including the creation and popularization of his holiday Festivus.

But, beware those who disagree with him, like Elaine Benes did in the Season Eight episode, “The Little Kicks” which resulted in him throwing down, and declaring, “You Want A Piece Of Me?”

This month, everyone’s celebrating the 30th anniversary of Back to The Future, but let’s not forget that we’ve only got four more years for the other greatest time travel movie of all time to celebrate it’s 30th.

From an Excellent Adventure to a Bogus Journey, William S. Preston, Esquire and Ted “Theodore” Logan followed the advice of mentor Rufus and utilized a time traveling phone booth to meet the princesses and bring a bunch of famous dead dudes to help with their school project, rock out as the band Wyld Stallyns!

And Rufus reveals that, Rufus goes on to explain that it was his duty to help the boys because, without each other, life in 2688 would be disastrous; with the Wyld Stallyns’ music, however, war and poverty would end, the planets would align in harmony (allowing contact with all forms of life “from extraterrestrials to common household pets”), and “it’s excellent for dancing.”

From the virtual reality within ENCOM, comes the very real reality for programmer Kevin Flynn.

The shirt depicts the Battle Grid with with both the evil Sark (as portrayed by David Warner) and Bruce Boxleitner’s Alan Bradley as his digital avatar, TRON.

The shirt pays tribute to this cult film from 1982, though it certainly would have benefited from a little bit of Cindy Morgan as Yori.

“Like the man says, there’s no problems, only solutions.”

Homer J. Simpson is rocking the headphones listening to some of the finest hits ever broadcast in Springfield.

But which song is he hearing right now?

Dr. Zaius? See My Vest? We Do (The Stonecutters’ Song)? Testify? Luke, Be A Jedi Tonight? Who Needs The Kwik-E-Mart? We Put The Spring In Springfield? Bleeding Gums Blues?

It doesn’t matter, does it?  Just as long as it doesn’t have Flanders singing….

From 3D Light FX, comes an amazing addition to any man cave or nursery (talk about adaptable), the Darth Vader hand with light saber.

One of a dozen Star Wars designs available, these cordless, decorative night lights give the appearance that the light has been embedded or has burst through the wall, while in reality the light is safely mounted on the wall’s surface.  An included vinyl allows you to add a “crack” which will further enhance the illusion.

The LED lights themselves will also last an astonishing 40,000 hours.  The force is strong with this product and it comes highly recommended. 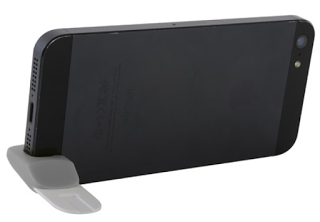 A must have for the casual photographer on the go, the Thumbs Up Snap Selfie Remote is a bit more subtle than the Selfie Stick.

This handy little gadget is powered by an app and a remote control which allows you to activate your shutter from a distance of up to 3.3 yards. The remote also comes with a removeable phone stand to prop up your phone during the photo shoot while the reverse click button will change the phone from front to rear camera, allowing you to take self portraits or wide shots with ease or macro photography without ever having to touch the screen.

An indispensable tool for anyone who uses their iPhone for pictures on a regular basis.