Marvel’s Jessica Jones is something completely new. It isn’t just another gritty, dark reboot set in a menacing urban landscape. It isn’t a hero of our beloved childhood that is now fighting for justice in a dark costume and a five o’clock shadow. No. This is something new.

Jessica Jones is a wonder. For those unfamiliar with the Marvel character, the hard talking, hard drinking, human chimney was always dark.

But in the new Netflix series, she is a revelation.

While Marvel has long be been the champion of the superhero adaptation on the silver screen, it has been a struggle to bring the dynamic to the boob tube for a while. There have been many, many, many attempts, but only a few successes, and fewer long-term hits.

A least until recently.

Within this new Golden Age of Television, the rebirth of the small screen format has classic characters formats new playgrounds in which to romp. The lines between what is a hero and what defines a villain have blurred ever since the day Walter White demanded that Declan to say his name.

With Jessica Jones, Krysten Ritter (who also made a name for herself on the genre-breaking “Breaking Bad”) plays the titular character is all of her damaged glory. 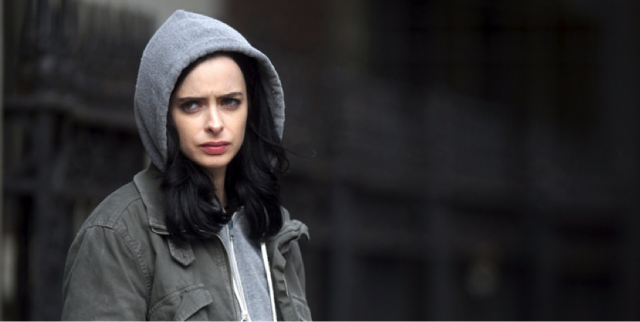 Jessica is a completely broken human being in a way we haven’t seen before. She is a drunk, but not adorable. She is snarky, but not in a way that makes her endearing. She is a superhero, but she has PTSD and shuns society, as well as people in general.

The source of the private eye’s suffering is caused by Zebediah Kilgrave (David Tennant as the Purple Man, for those keeping score at home), a former flame with a sadistic streak and the ability for mind control. His complete control over her caused her to complete and utter breakdown, similar to soldiers returning from the frontline after watching the needless deaths of the countless innocents.

As these characters dance their way to their ultimate showdown, the series littered with characters that add the extraordinary backstory, including Mike Colter as powerhouse Luke Cage and Erin Moriarty as Hope Shlottman, Kilgrave’s latest victim.

While all the aspects of a comic book adaptation are present, this isn’t a comic book story. Yes, Jessica can lift a car. But she can also lift a bottle. She has no interest in stopping bank robbers or helping hostages. Her pain and suffering is tangible to the viewer.

In turn, Kilgrave isn’t interested in a big scheme to get rich, or control the city. He is a simple man with simple interests. He likes beautiful woman and wants to control them. And he is evil, but a type of evil that is comprehensible, on that can easily slide within the dark recesses of abusive ex boyfriends or creepers on Craig’s List.

Dangerous, but in a very real way.

There is no greater good in Jessica Jones. No world to save. No city to rescue. Because the city doesn’t need rescuing. The focus is about the people, their struggles and the difficulties of life. Jessica Jones is a superhero. Yes, because she can flatten a rowdy bar brawl in a matter of seconds without nary a lipstick smear, but also because she can force herself to face a vicious foe who put her through irrevocable mental damage.

And that isn’t easy.

Jessica Jones is on Netflix. Check it out.