There was a very interesting moment on Saturday Night Live a few weeks ago.
Sure, it already was a very special episode; comedian Tracy Morgan returned to public life after he was seriously injured in a fatal car crash.
The fake 30 Rock clip with Tina Fey, Alec Baldwin, Jane Krakowski and Jack McBrayer was pretty special, sure. The revivals of Brian Fellow, Woodrow and Astronaut Jones were pretty great.
(I will argue till the cows come home that Astronaut Jones is one of the best pieces of “blackout” sketch comedy ever invented.) 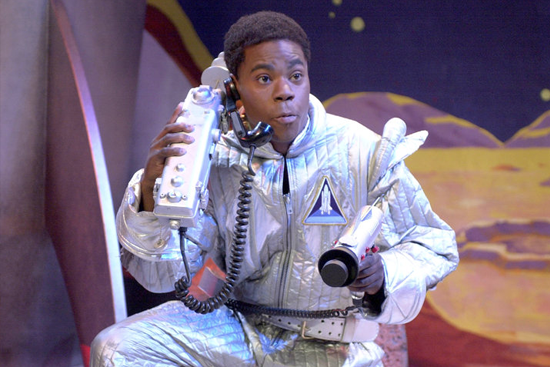 Morgan even brought out his fabulous talent of comical thug-tears emotional shouting to the lovably absurd “Standoff.” There’s nothing fancy about the short film, just a simple joke about a man asking another man in tense bar situation, “Wanna dance?” and meaning it literally. “You don’t wanna put a rose in my mouth?” Brilliant.
Even the 10-to-1 sketch “Yo! Where Jackie Chan At Right Now?” had such stupid energy. When Morgan and Kenan Thompson go to Da Chief from “Where in the World Is Carmen Sandiego?”, I was rolling.
But for me, the most interesting moment came during the “Family Feud: Extended Family” sketch:
1. There were enough black people in the cast – Leslie Jones, Jay Pharoah, Sasheer Zumata – to make an entire family.
2. It wasn’t even all of them; Kenan Thompson was busy playing Steve Harvey.
3. None of the family members on the team was Morgan. So many times SNL roped its black hosts into sketches that needed a black person to be in them for it to work.
4. The joke? Morgan did play the patriarch of the family. But he has divorced the mother and appears with his new wife and stepkids as the competing team. 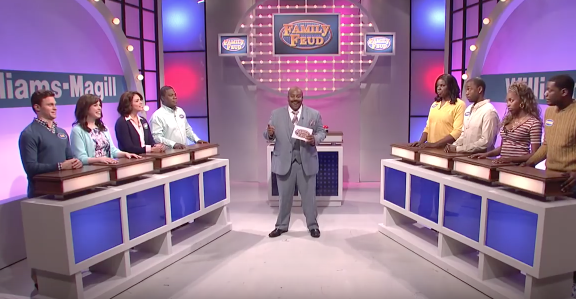 Cue the hosannas! Talk about when diversity works for you.
Of course, for all these changes, SNL still finds ways to backslide. Having Donald Trump host is among some of the worst decisions in the show’s entire history, and for several different reasons.

For sure, SNL has had numerous politicians and presidential candidates appear on the show: Hillary Rodham Clinton, Bob Dole, John McCain and Sarah Palin, Rudy Guiliani, even Steve Forbes and Janet Reno. 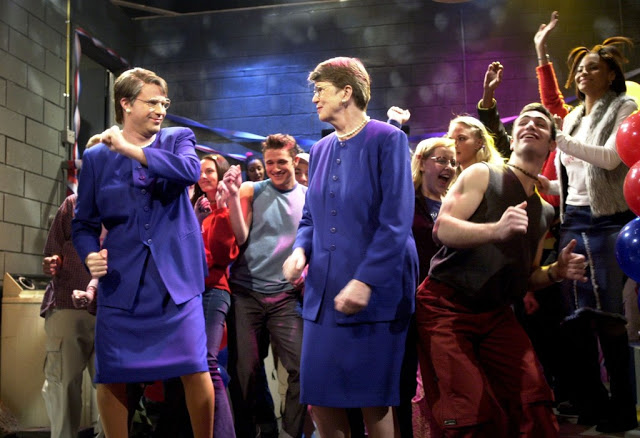 I’ve got no problem with an appearance on the show. It’s a little bit of self-satire on a comedy show that is packaged, delivered, and then gone.
But it’s another for a candidate to host the entire show. That felt like it crosses the line into too much free advertising for the candidate.
And, given Trump’s most odious comments at the time regarding Hispanic immigrants and women as someone seriously running for leader of the free world, Lorne Michaels and NBC entertainment’s decision to give Trump an even wider platform to present himself as a likable jokester was severely wrongheaded for any scruples beyond ratings.
In the span of a week: Trump spilled his xenophobic, nativist fear and hatred on Syrian refugees; applauded the attack of a purported Black Lives Matter protestor at a rally; and trumpeted a racist meme full of deceits quoted by Neo-Nazis, including Bethel AME shooter Dylann Roof.
Nope. I couldn’t even bring myself to watch the episode. Apparently, it was as awful as expected, while undermining any of SNL‘s attempts at political edge (which they don’t have much of, anyway) in a time when we desperately need it.
I can’t laugh with that kind of man. I still can laugh at Trump sometimes, as The Daily Show and Stephen Colbert have done expertly. I’m good with ridiculing people who also deserve our truest sense of condemnation.
SNL also has laughed at Trump smartly such as in Cecily Strong’s performance as Trump’s wife, Melania, jokingly poking holes in all his statements. 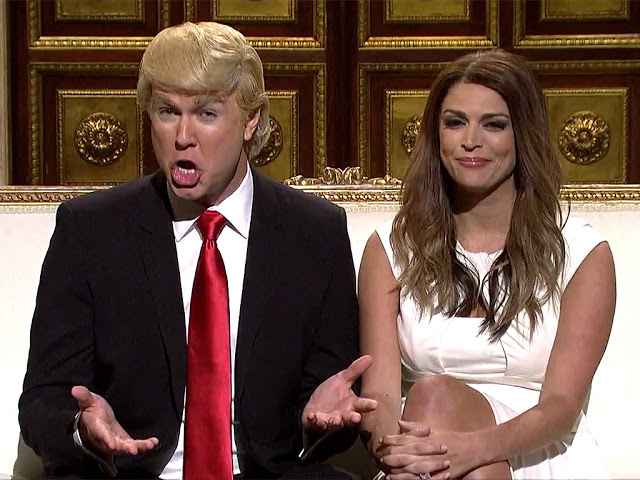 Not to mention that Colin Jost and Michael Che keep mining our times of social unrest for disquieting jokes that continue to ridicule and condemn, including Trump.
Che says to the setup about Trump advocating a government database of Muslims in wake of the ISIS attacks in Paris, “Which is absurd, because there is absolutely no way that we, as Americans” – punchline – “don’t already have that.” In a world where the NYPD seeks informants to track Muslims in the city, or police departments running surveillance on who shows up to Black Lives Matter rallies, Che’s not too far from the truth.
In this past week’s episode, Trumpian ignorance appeared as a figure of ridicule again in the sketch “Should You Chime In On This?” Another SNL game show sketch with a twist: “three idiots,” as the host calls the contestants, keep giving backwards opinions on hot-button issues they have no business, knowledge or experience to talk about well.
Host Matthew McConaughey played Ned, a man who looked every bit the right-winger conspiracy nut. A Trump button wasn’t displayed on his leather vest, but it could have been. He proudly stated that he travels from town to town voting against school budgets. 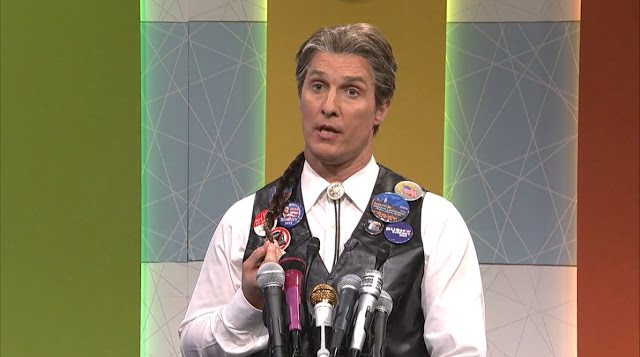 Aidy Bryant played a woman who doesn’t watch the news but knows exactly what should be done with ISIS and Syrian refugees. Kyle Mooney played an NYU college student who says he won’t chime in on women’s reproductive rights, not because it’s not his business, but because he then makes a wishy-washy point about “listening to each other” sidestepping the conversation altogether.
Kenan Thompson, ever masterful in comic exasperation, played the game show host, scolding each contestant for thinking they have a valid opinion on any of these topics. When the sirens go off after McConaughey’s character says “all lives matter” – the trump card of race deniers everywhere – the sketch could top itself only by bringing out Kate MacKinnon’s Hillary Rodham Clinton and daring the contestants not to say something dumb/sexist about her. (Of course, they did.)
I don’t know if it was on purpose, but the racial dynamic of a black man telling a bunch of white people with dumb, racist, sexist opinions on social issues that they have such dumb opinions felt pretty purposeful.
All I know is, the sketch played out like my Facebook feed come to life. And on that point, I laugh to keep from crying, because I don’t have an “all lives matter” siren yet. 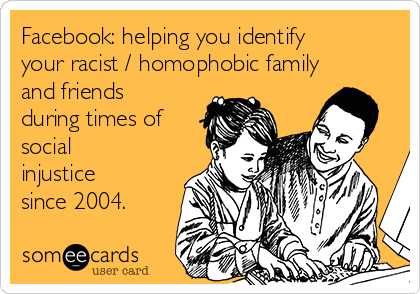