Adam Beach has had an impressive, varied career: he played Victor Joseph in the indie fave Smoke Signals, the real-life Ira Hayes in Flags Of Our Fathers, and the recurring role of Detective Chester Lake on Law & Order: Special Victims Unit, among many others.

Beach plays Nakoma, a Cree warrior, in the new Western/noir/thriller Diablo, which stars Scott Eastwood, and will appear in next year’s Suicide Squad as Slipknot.

I had the pleasure of chatting with Mr. Beach while he was promoting Diablo, which will be released in theaters, On Demand and via iTunes on January 8, 2016.

FOG!: How did you come to be cast in Diablo?

Adam Beach: Scott asked me to jump on the movie and I said, “Of course I would, dude!” And after reading it, I thought it would be a privilege to be a part of it. It’s a great story, it sticks to the momentum of the Western genre and they allowed me to bring my style to the character and it worked, you know?

Does this affect how you choose your roles? There have been some movies recently that have gotten some flack for their representation of Native Americans…

I’ll get certain films that come my way; if it’s terrible, I just don’t do it, Native American or not. I’ve been pretty lucky that a lot of people want to work with me because they think I have enough experience.

Sure, and it’s apparent there’s a lot of diversity in your roles. And by the way, I was asked by my fiancée to let you know she loved you on Law & Order: Special Victims Unit.

Yeah, that was fun! You know, I was shooting a movie called Bury My Heart At Wounded Knee, and Dick Wolf was producing that and after the movie he said, “Hey, do you want to be a regular on SVU?” 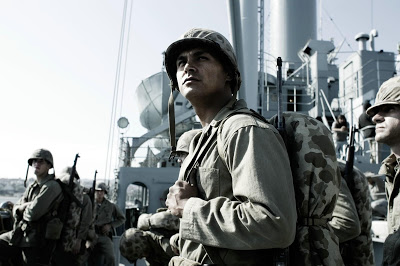 You’ve known Scott Eastwood since Flags Of Our Fathers, correct?

It’s great, because he’s a cool guy, you know: Southern California boy. And his father; you can tell they have a great resemblance to each other and they’re really committed to their work. Scott doesn’t walk around with a chip on his shoulder or have an ego so much as trying to carve out his own plan and his own career.

I mean, Eastwood: that name goes a long way. He knows that it helps him out but he wants to make sure he’s as good as anybody. He’s got bigger boots to fill. I don’t have any boots to fill, I just gotta do the best I can. (laughs)

Do you do any research for a role or do you just dive right in?

AB: The research [for Diablo] was the Cree language, trying to make it authentic. We’d have to make sure that the words I’m saying matches the interpretation of the Cree dialect.

Being Native American myself, I practice the traditional ways and stay connected to my culture and ancestry, so I’m able to go into the character in Diablo and give it that beauty that it needed. I carry a traditional pipe. I do sweat lodge ceremonies. I try my best to connect with my environment. And be respectful as a human being to the trees and the water, etc.

And to bring that into the character, you just manifest everything that’s surrounding you. And if you can incorporate that and connect with the soul, then the depth of the human being, that should come across. It’s not just words.

Did you work with a dialect coach?

Yeah, I worked with a dialect coach. His name was Smoking Joe. He was a famous Pow Wow singer back in the day. He was the grandfather of the young boy in the movie. We tried to do the best we could; I’m not perfect with my Cree language, but it sounded pretty good. (laughs)

I thought that young boy was quite good in the movie.

He was awesome, man! You know, they were asking him to do another movie; I think it was the DiCaprio movie, and he chose Diablo because he wanted to work with me. And I was like, “You chose the wrong movie, dude!” (laughs)

Are you a Western fan?

Oh, most definitely! Cowboys and Indians all the way!

What do you think of this Western resurgence lately, with The Revenant, Diablo, The Hateful Eight, Bone Tomahawk, etc.?

You’ll find that the Western genre will always be there. It’s just a beautiful place, back in the day, if you look at it. One cabin on the prairie, or hunting buffalo, living off the land. It has such a beauty to it; they’re not punching a clock 9 to 5, going, “I want my paycheck!” Here, you have to go out and hunt for your shit! That’ll always be there.

But if you look at it, the Western genre is in a lot of films.

If you look at Star Wars, there’s a Western aspect to it. There are other people who are trying to fine-tune it and put it in other forms of filmmaking. And you’re going to always have the misinterpretation…you know, back in the day with Cowboys and Indians: “Those savage Indians! Oh, those drunken Indians!” They’re very one-dimensional.

So, you know, people will stick to that, the savage Indian. When, you know what? That isn’t us at all. We had a beautiful tradition that’s still around today. It just so happened that the warrior spirit had no fear of death. So, if someone presented a way to cause damage to our society, we were quick to defend it. That’s why people said, “Oh, the savage Indian!” What, we hunt our food, live in a bush or under a tree, take care of our family. What’s bad about that? We’re searching for that today!

You’re gonna always have people coming up with a film that negatively depicts us. Then you’re gonna have the film that shows the beauty of us, of who we are. That’ll always happen. There’s not much we can do; they’ll always find something bad about something.

I like your character in Diablo. You come across as someone who allows the boy to fulfill his honor, his debt but you also have the safety of your people in mind.

Oh, yeah and that’s what the ceremony represents. Let’s seek within our soul the therapy we need. We wanted to help his psychological warfare and what we find is a secret that he’s keeping.

What can you tell us about Suicide Squad [Beach plays Slipknot]?

Yeah, dude, you’re gonna like it! It’s great playing a villain, it was wonderful working with the cast we had.

People are gonna be amazed because they haven’t seen this cast onscreen [together] before, and I think we’re gonna find out a lot of people have wanted to see the villainous bad boys of the DC Universe.

The heroes? We’ve seen it before.