From Krypton to Themyscira to the Deadite infested woods of North Carolina, we are kicking off 2016 with a return to form of the classic Triple Shot comics review column!

Can’t make heads or tails of a pull list? Are you easily confused by staring at rows of comics on the shelf? We hope these recommendations do you well. Why think when we can tell you what comics to buy!

This week, Max Landis and Joëlle Jones give you a unique spotlight on a young Clark Kent, Renae De Liz (Peter Pan, The Last Unicorn) and Ray Dillon retell Wonder Woman’s origin in Legend of Wonder Woman and lastly Ash is back, baby, in Evil Dead 2: Cradle of the Damned!

This week you get an extra bonus Heavy Metal chaser as one of our very own FOG!’s very own (Steven) Scott Duvall! drops his new book Necropolis: Continuum #1 from Heavy Metal Comics.
That’s right, that Heavy Metal! 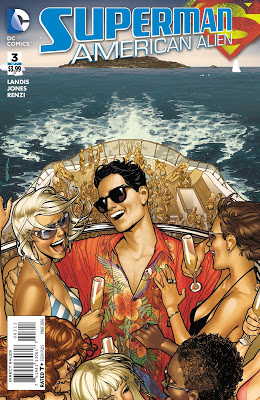 Max Landis (Chronicle, Dirk Gently) has been surprising comic fans the past few months with his take on different eras of Clark Kent, Superboy and Superman. With different artists assigned to each chapter of this mini-series, we are able to appreciate different aspects of Clark’s home life.

Of course, this is the almost predictable ‘modern retelling’ of the Superman origin. What sets it apart, besides the art treatment, is a feeling that Superman is a legend.

No chapter picks up where the last story left off.

Much like in American television, each artist on a chapter shows a different era of Clark’s life, and each of the artists would be the guest director of the episode.

This particular chapter’s director is the talented Joëlle Jones (Lady Killer, Adventures of Superman).
The story takes place on Bruce Wayne’s yacht, but master Bruce is not even there to celebrate his birthday. Clark stands in for the absent Bruce, who is ‘Never at his (own) parties’.

A young Clark lives it up, hooks up with a lady, gets drunk and has all of the fun Bruce Wayne would only pretend to have.

There have been plenty of stories where these two have switched places but what sets this story apart is that they have yet to be acquainted.

It’s not all booze and cupcakes as a popular DC villain is after Bruce Wayne and Clark has to face him.

In conclusion, this a fun issue, even if it just stands alone. It is a fun take for fans of the classic Batman and Superman dynamic that flashes back to the pre-superhero days.

The art is gorgeous and I’m enjoying what Max has to say with ‘his’ Superman! 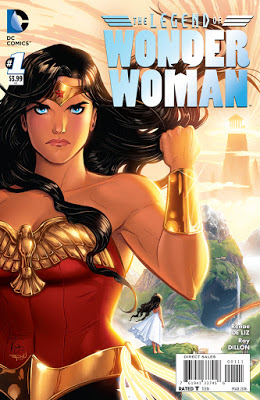 This is the year of the twirl, the day of Diana, the era of the Invisible Jet.

Later this year we will see Grant Morrison’s Wonder Woman: Earth One. Of course, that’s saying nothing of Gail Gadot starring as the Amazon Princess in this year’s Batman v Superman: Dawn of Justice.

NYT Best Selling author Renee De Liz writes and draws this telling of the Wonder Woman origin story that has been released digitally on ComiXology before being collected into these issues for the masses.

Her husband Ray Dillon (Star Mage) is on inks and colors for this one.

From her mystical origin of clay to being trained as a warrior, this first issue is a great introduction to Diana as a young girl. When something is amiss on the island, she follows her instincts but puts herself in danger.

I can’t wait to see young Diana grow up on Themyscira and her complicated relationship  to her mother. I will continue to read this, it is a smart and well drawn book, and has the added bonus of being written by a woman this round.

So far this story is drawing me in as an all-ages welcome (technically 12+) take on the Wonder Woman mythos.

She is part of the Trinity of DC heroes, but I always find revisiting her origin to be refreshing as the years and multiple continuities have not been kind to a clear picture of how she came to be and came into our world from her island paradise. 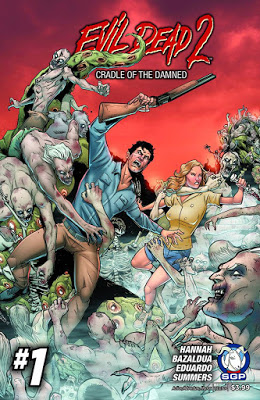 Space Goat Productions has been releasing Evil Dead 2 stories since 2015, picking up where Sam Raimi left off.

I’m publisher neutral as far as Ash stories are concerned, but I am happy to report this issue was just as satisfying as any other Army of Darkness comics from Dynamite that came my way.

In the latest, Cradle of the Damned, we have Ash vs. Deadites and a book laying out instructions on how to get rid of the creeps.

What you might not expect is what is happening to the Deadites at the Smiley Cat Food factory. Let’s just say Mr. Whiskers would be better off with dry food for the rest of his life.

Next issue, Ash and his lady take on the Mirror Dimension and Cthulhu monsters…that is to say…if they survive.

This issue also has a special preview of February’s Evil Dead 2: Revenge of Hitler which is the Hitler comic you didn’t ask for but maybe you wanted. 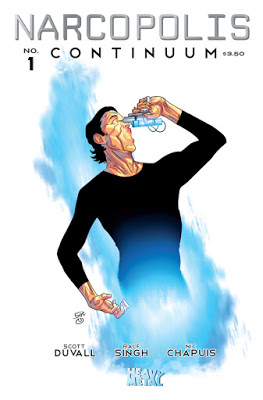 The 2015 UK futuristic sci-fi thriller Narcopolis is based on a world where all recreational drugs are legal.

Necropolis: Continuum exists in the world where Ambro pharmaceuticals are doling out doses for the masses, legally and above board getting everyone to tune in and drop out.

Now Ambro engineer Ben Grieves is working on something completely different in the labs.

Ever since he was given a copy of H.G. Wells’ The Time Machine by his absent father, he has been obsessed with time travel, and now, with the help of Ambro’s resources, he might be able to achieve it.

For fans of recent time travel movies like Looper, Transcendence, Primer and i you will enjoy this book and the logic problems of time travel that can tickle the brain.

I must confess I have not seen Narcopolis — nor do I expect that when I do, that the film will be about time travel, but these are the kinds of stories I’m always trying to keep up with what the writer is doing next.

Congrats to Scott on a great first issue — I very much look forward to more!