This installment we have a great list of titles you should definitely check out. Let’s get started! 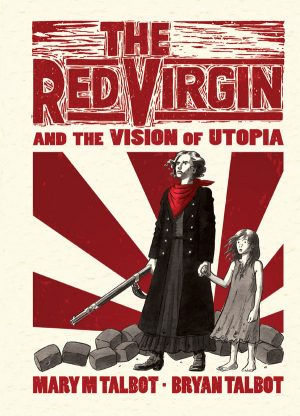 The Red Virgin and the Vision of Utopia

I am always blown away by the work of Bryan Talbot.

His books, Luther Arkwright, Alice in Sunderland, and The Tale of One Bad Rat (amongst many others) are all nothing short of brilliant.

He’s brilliant. Lately he’s been working with his wife writing and him illustrating. His work is deepened because of it. This is just stunning.

The story is about chronicling the life of Louise Michel, the revolutionary feminist dubbed ‘The Red Virgin of Montmartre’.

Louise was an extraordinary woman, but little known in the Anglophone world. She was a utopian dreamer, notorious anarchist, teacher, orator and poet, decades ahead of her time. Always a radical, she fights on the barricades defending the short-lived Paris Commune of 1871. Deported to a penal colony, she takes up the cause of the indigenous population against French colonial oppression.

Sound intimidating for those of you out there who like X-Men? Well, it’s not. It’s literary for sure but the writing is so strong, and the art is so spectacular, it’s easy to follow and just stunning.

Bryan Talbot was one of the pioneer’s in the graphic novel world. He is constantly working, constantly improving. Now with the addition of Mary M. Talbot, he is still breaking new ground. This is awesome.

Give it a shot. You might surprise yourself with how much you liked it and how easy it was to get into. For both comic book fans and non comic books fans alike. 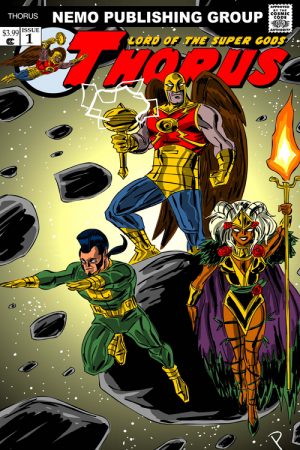 Thorus: Lord of The Supergods #1

This is a comic book for a very select audience. I do believe that audience exists for the comic book.

But this comic book does has merits and let’s focus on those.

First off is writer/artist Jay Piscopo. He obviously cares about his characters and what he is doing. It shows in every panel.

He’s got a Jack Kirby flavor to him and it’s pretty damn cool. Thorus himself seems a blending of Thor and Hawkman. Not a bad thing.

Basically, the story is about Thorus protecting an alien world from an alien invasion. Simple.

A little TOO simple for me. I feel like Piscopo is a smart guy…and I wanted to see that intelligence come across the page. The storytelling was cool…I just wanted more from it.

But if you are into simple fun comics, or cartoons from the 70s, or hell even old Marvel comic books, pick this up. There is a lot to like and it’s pretty decent overall. 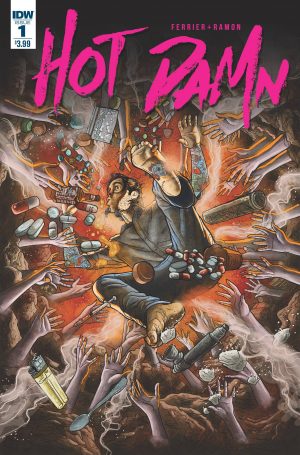 Written by Ryan Ferrier and Illustrated by Valetin Ramon
Published by IDW Publishing.

Hot Damn! One of my favorite lesser known people in the comic book field is writer Ryan Ferrier. A talented guy. Full of enthusiasm. And he did it. He wrote a comic book called Hot Damn!

Man, it’s fun. It reminded me of the stuff Garth Ennis used to write and doesn’t really anymore. it’s got a sick sense of humor and a surprising amount of depth.

Teddy Graham is stuck in hell.

He can’t talk about his feelings, so he is stuck in a therapy session he can never leave.

It’s fun. Super fun. The art by Ramon is perfectly suited for this. If you are looking for a fun title that is off the beaten path this is it. And pick it up for Ferrier. I wouldn’t be surprised if you start hearing more from him in coming months. 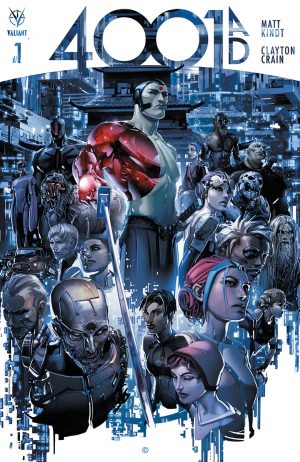 This is a hell of a crossover.

I said it before and I’ll say it again: Matt Kindt is a genius. This crossover deal with the future characters of Valiant’s line and it’s been awesome. Kindt has constructed a hell of a tale and I can’t keep my eyes off it.

The character Rai is leading a rebellion against his Father in this book. It’s awesome. Epic in scope. And an easy, fun, yet smart read. Kindt is super on the writing part of it. And Crain is one of the best artist working today. His art never fails to impress. It’s thrilling.

Add in David Mack doing a bit of art and it’s a must read. Don’t miss out on Valiant’s line. It only gets better and better.