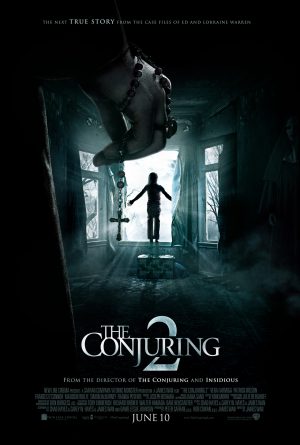 The sequel to 2013’s horror hit The Conjuring takes paranormal investigators Lorraine and Ed Warren (Vera Farmiga and Patrick Wilson) to London for the infamous Enfield Haunting, in which a little girl seems to be channeling the spirit of a particularly malicious ghost who won’t accept that he’s really dead. The jump scares are numerous, but the film is about as subtle as a poke in the eye with a sharp stick.

The film begins with Ed and Lorraine very briefly investigating another notorious ’70s haunting in Amityville, where Lorraine sees a vision of Ed’s death. She wants to stop taking on new cases, until a priest asks them to check on the haunting in Enfield as it’s already too much of a media circus for the Church to investigate directly.

Lorraine reluctantly agrees to the consultation, making Ed promise not to get involved if the haunting is real. Of course, he can’t keep that promise when they meet 11-year-old Janet (Madison Wolfe) whose distress appears entirely genuine.

Wolfe is very sympathetic as Janet and the supernatural phenomena begin subtly enough at first. The worn old leather chair in the corner begins rocking by itself and a swing in the backyard starts swinging on its own when there is no wind. But soon Janet is levitating, growling and speaking in a deep, guttural voice, and furniture is shooting across the room.

That, at least, is in keeping with what was portrayed in The Enfield Haunting, which did not feature the Warrens at all. According to Justin Playfair, another investigator who was portrayed by Matthew McFadyen in the mini-series, the Warrens’ involvement was limited to just one day, and nothing like the dramatic showdown we see in Wan’s film ever took place. But hey, Hollywood!

One character who remains is Maurice Grosse (played here by Simon McBurney), who believes Janet, even when a skeptic claims she has proof the entire haunting has been faked. In the mini-series, he’s played by Timothy Spall and is the focus of the story. His own tragic tale, in which he lost a daughter, is briefly mentioned in The Conjuring 2, but it makes for a deeper, more compelling arc than Wan’s razzle-dazzle spooky nun demon. Oh, and the entire room full of crosses that turn upside down one by one? Also (allegedly) never happened. But then, the entire haunting, while heavily documented, is still considered an elaborate hoax by many.

One of the manifestations of the Enfield demon in The Conjuring 2 is “The Crooked Man,” a long, angular figure from the children’s magic lantern. When he appears, larger than life, he strongly resembles the frightening title spook from the much-better The Babadook.

The Conjuring is still the better, more subtle film, with more genuine scares. As a rule, I’m not a fan of exorcism horror movies, since they all tend to play out exactly the same way, which is why I was disappointed when The Conjuring went that route. But there’s nothing as deliciously spooky in the sequel as the clapping game of hide-and-seek in which not just the humans are playing.

Patrick Wilson is looser and a lot more likeable than he was in the first film. (He gets to do a surprisingly great Elvis impersonation at one point.) And Vera Farmiga is always terrific. I’d love to see more cases of theirs, but I’d prefer one that was more closely based on eyewitness accounts.

If you haven’t see The Enfield Haunting and you’re looking for a movie that will make you jump, this will likely do the trick. My friend (who never saw the mini-series) clutched my arm or my hand tightly numerous times throughout the film and later apologized for nearly cutting off my circulation.

Rating:
3 out of 5 if you haven’t seen (or were bored by) The Enfield Haunting
2 out of 5 stars if you prefer more subtle scares