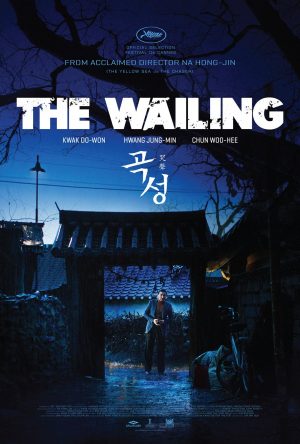 There is a myriad of clever diversions contained within Goksung (The Wailing), the ambitious and nearly three hour long horror film by director, Na Hong-Jin, but there is, as in almost all significant works of horror, a deliberate allegory formed by its terror, so let’s start with the first diversion and the foundation of the film’s theme conveyed through the utilization of the archetypal cinematic character of the bumbling policeman, here named Jong-goo (Kwak Do-Won).

We first meet Jong-goo at his modest home in the village of Goksung, where he is employed as a police sergeant. It is the early morning when our sergeant receives the call that his presence is requested at the scene of a possible murder, which given the diminutive size of Goksung, should create a moment of urgency within Jong-goo, but he instantly gets derailed by his mother-in-law at the suggestion of breakfast with the family. Sure, breakfast is the most important meal of the day, but this simple dereliction of duty, though presented comically, mischievously sets up the beginning Na’s criticism of contemporary Korean familial structure and its effect on Korean society.

After breakfast, Jong-goo eventually arrives to the scene of the crime, and it is a ghastly one. A horrifically pustuled and bloody man sits in a catatonic state on the porch of his home after he has taken a blade to multiple victims, which draws a look of bewildered disgust from Jong-goo. We immediately get the sense that he has not seen this level of carnage before and whatever instincts he may have developed as a police sergeant are taking a backseat to his cowardly and complacent persona in this moment. Rendered facile, Jong-goo takes direction from what seems to be junior officers and fumbles around the viscera until he stumbles upon a strange plant that holds images of human skulls. Is this Jong-goo’s instinct finally kicking in, or is he just distracted like a small child would be in the face of adult business? Perhaps the answer lies in a scene later that evening at the police station when Jong-goo and his partner are confronted by another classic cinematic character, this time from Japan, in the form of a brooding, Ringu-styled faceless woman. Her appearance at the station doors sends Jong-goo and his partner into an almost teenager-like late night horror movie-watching freakout.

The following day, when another series of murders occurs, and Jong-goo goes to investigate, he is again the target of comedic diversion when an ominous, white-clad woman, who appears deranged, begins to playfully throw stones at the sergeant and his partner. After Jong-goo’s partner leaves the rock throwing to interview a dermatologist in the hope of finding a correlation between the rash-covered murderers, Jong-goo speaks to the woman in white, who explains to the sergeant the details of the crime that she witnessed and then points a finger to the source of the wrongdoing, a newly arrived elderly Japanese man who represents the historic nemesis of the Korean people, and, for Na, another potential diversionary answer to the community’s tragedies. Earlier in the film, Jong-goo’s partner asserted that the same Japanese man had raped a woman in the village, but the assertion is done in a way that makes you question the role of police in that community, as the crime is spoken about as gossip and not as an ongoing investigation. As Na’s setup would suggest, the officers now have a suspect, but is that based on facts or simply past prejudices?

Even though the officers now have a lead suspect, and they know that they are handling something out of the ordinary (the woman in white did claim that the Japanese man is a ghost which is met with skepticism from Jong-goo), they are lackadaisical in their pursuit, that is, until Jong-goo’s daughter becomes the next victim of this seemingly supernatural curse that affects her like a physical and mental cancer, causing her to develop welts, rapidly consume food, and utter profanity at her family. Only now, upon seeing this threat to the community descend on the one person that Jong-goo cares about other than himself, does he begin to take action, action that is more becoming of an angry father than an officer who is serving his community.

As Jong-goo wants to confront the suspected man but does not speak Japanese, his partner calls his younger cousin, who happens to be a deacon training to become a Roman Catholic priest and who is the first representation of organized faith in the film, to serve as an interpreter. The officers tear apart, without a legal warrant, mind you, the Japanese man’s home looking for evidence and find a shaman and serial killer photo shrine, much to the chagrin of our fledgling priest, who seems less concerned about their discovery and more concerned about the illegality of the officer’s actions, which again serves as another example of the officers putting their interests ahead of their community’s, for anything they find on this impassioned search cannot be considered as evidence. The priest is then attacked by the Japanese man’s black as coal, ferocious devil-dog, which almost mystically calms down once his owner arrives to find his home vandalized. Jong-goo, after threatening the mysterious Japanese man and asking him to leave the village, returns home to find his daughter more ill than before. It is at this point that Jong-goo’s mother-in-law recommends the use of a shaman, which he does not object to, so she finds the best one that money can buy, and so our rent-a-shaman arrives, and he is the height of western fashion, which considering his spiritual occupation is a very bad omen.

Director Na here sets up a narrative where the viewer is not sure as to whom is the malevolent spiritual force, but the faithless Jong-goo, who rejects Christianity and only turns to the shaman as a last resort, continues to believe that he knows what is best, especially when it comes to saving his daughter. With the shaman, comes a ritualistic sacrifice of chickens and goats to rescue his daughter, so now, Jong-goo becomes complicitous in the demise of these animals, which opens up the potential of the officer being responsible for not only the disturbance of the human order of his community but also for the affront to the natural order of his surroundings, surroundings that are highlighted throughout the film vis-à-vis the lavish cinematography from Hong Gyeong-Pyo (Mother, Snowpiercer). Regardless of these transgressions, Jong-goo arrogantly states on multiple occasions, “Remember, daddy is a police officer, and he will take care of this.”

Jong-goo’s confidence in his ability to save his daughter and control the evil possessing her may seem nobile upon first appearance, but this opens up the narrative to the proliferation of the evil and what may be the core message of the film, the negative effects of filial hubris on Korean society; filial hubris being the placing of family above all and anything else, including in this case, higher beings and those you are sworn to protect. Here, Na touches on an issue in contemporary Korean society that has become the subject of many critically acclaimed films over the last decade, including Lee Chang-dong ’s 2011 film, Poetry, and Bong Joon-ho’s 2009 film, Mother. Both films possess matriarchal figures who go beyond the letter of the law in order to save members of their respective families who are accused of wrongdoing. But, both Lee’s and Bong’s films view their protagonists as positive forces of justice in terms of doing whatever is necessary in order to save one’s family, whereas Na’s officers in The Wailing negate the order of law inherent within their occupation as officers to aid Jong-goo’s family, which proliferates, rather than stops the mayhem destroying the community, suggesting that perhaps the true evil is the officers’ negligence towards the people they serve. This is a bold statement by Na that he delivers through an effective horror framing where right and wrong are blurred by both demonic and human evil.

Na masterfully uses some fairly grotesque visuals and concepts as diversionary elements in The Wailing to throw you off the trail of not only the cause of evil in the film but also his core social critique of a nepotistic Korean society that chooses to direct anger towards ancient enemies while rotting from within due to outdated familial imperatives that keep people from forming the necessary communities to battle evil as a whole, united front. Na’s striking visuals and moments of intense suffering may cause you to feel a level of confusion due to your own empathy for individual characters and may also distract you from the director’s thesis detailed above, but that is indeed Na’s intention for his beautifully executed allegory. The Wailing will most likely go down as one of the finest uses of the horror genre as metaphor for a society’s woes, in the same way that George Romero’s Night of The Living Dead used the zombie trope to examine America’s issues during the civil rights movement.