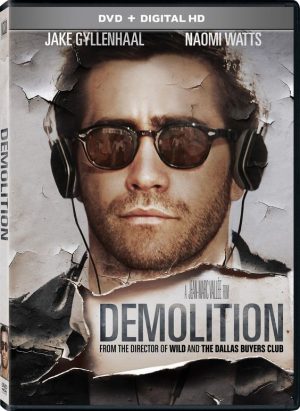 Davis (Jake Gyllenhaal), a successful investment banker, struggles after losing his wife in a tragic car crash. Despite pressure from his father in law Phil (Chris Cooper) to pull it together, Davis continues to unravel. What starts as a complaint letter to a vending machine company turns into a series of letters revealing startling personal admissions. Davis’ letters catch the attention of customer service rep Karen (Naomi Watts) and, amidst emotional and financial burdens of her own, the two form an unlikely connection. With the help of Karen and her son Chris (Judah Lewis), Davis starts to rebuild, beginning with the demolition of the life he once knew.

Last Word: Grief is such an unpredictable emotion.  It can be surreal, overwhelming, and alienating.  At times between the heaviness that you feel in your chest, your brain simply rewires itself; processing things differently.  Compartmentalizing.  Simply allowing you to function on the most basic level.

So begins the path of  Davis, played by Gyllenhaal, a passive participant in his own marriage until his wife is killed in a car accident, unraveling his life and propelling him into using destruction (or wait for it…demolition)  as a way to process his grief.

Demolition, the latest from Jean-Marc Vallée, director of Wild and The Dallas Buyers Club, unfortunately uses too heavy a hand in trying to be subtle and the film’s attempt at symbolism and meaning are simply just attempts.  The acting, however, are far better than the film itself, with Gyllenhaal once again delivering a raw, engaging performance that serves as a reminder that he is one of the best actors working today.  Watts, Cooper and newcomer Lewis all deserve accolades.

In all, Demolition, heavy-handedly tries to capture loss and grief, but misses the subtlety that comes with moving on and learning how to live again.