The DC Rebirth rages on so I’ll start with the best of the bunch and work my way around. 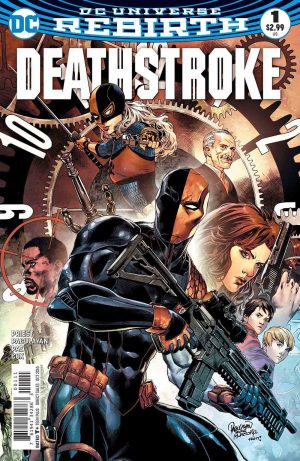 So it’s without question that this is one of my favorite books out by DC Comics right now. The Rebirth line promised a lot but didn’t exactly deliver. This one does. And that is a testament to a strong creative team.

Priest writes one hell of a solid story. It’s passionate and new and fun. What I like best about this is that Slade Wilson is a bastard. As Deathstroke, he doesn’t apologize for what he does. He just does it. Priest moves the story along at such a great clip that you are never bored. You just sit back enjoy the ride. And that is what is happening here. It’s enjoyable. And it delivers.

The art is sharp and keeps the pace of Priest’s story moving right along. There is actually never a dull moment. And there is never a moment where I look away or have my mind wander.

This is a top notch comic book. I suggest picking it up. It’s what the DC Universe should be looking like: Sharp, well told stories that make you wanting more. 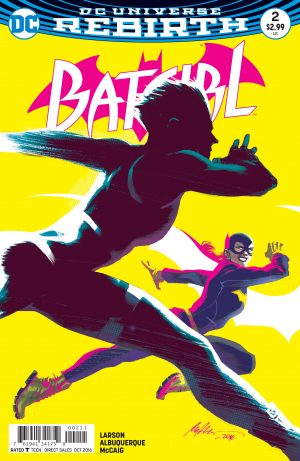 Batgirl #2 picks up where the first issue of Batgirl left off. In other words, it’s fun, fizzy, and entertaining but with not much in the way of real consequences.

But that’s okay! Larson seems to want to write a self contained story set in it’s own kind of universe. And it’s entertaining. Her characterization of Batgirl and the characters around her are fun. They are entertaining. I love the dialogue and the interactions. And the story goes along fast.

I also love the art. Albuquerque has stepped up to be one of the top artists out there. My only problem again is that it feels slight. I wish there was more things that had some real consequences to them. But hey.

This is an entertaining book and one of the better titles of the new launch. Pick it up for it’s beautiful art and a fun story to go with it. 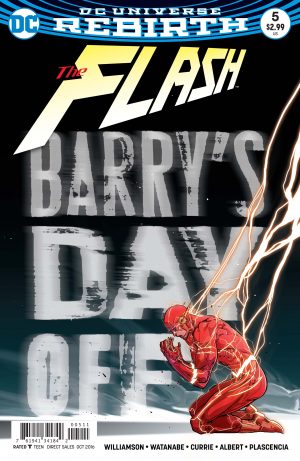 The title of the book is “Barry Allen’s Day Off.” And it’s a classic.

It’s one of the best issues of The Flash in the past few years. This is the way I would like my Flash to be for years to come.

Look, I am not going to spoil this book for you.

Williamson knows the character and knows what to do with Barry Allen. I always though of Mark Waid as the best writer of Wally West. Bar None.

However, for Barry Allen it may be Williamson.

There is such a great moment where Barry is asked about a possible new girlfriend…and suddenly, Barry Allen is interesting in a way we have never seen before.

The art truthfully was a little weak (A little too much manga for me) but it didn’t kill the story at all.

I hope Williamson keeps this up. I am excited every time there is a new issue. Also a beautiful cover. This is a great book. 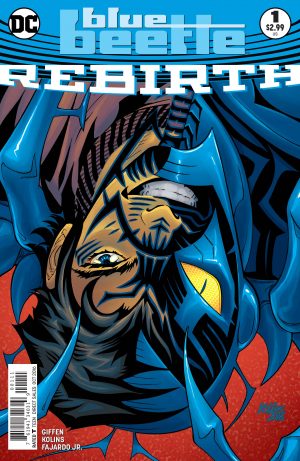 I love the original Blue Beetle. I was hopeful on this one. Plus it had Keith Giffen who I used to love. Yet, this one fell a bit short for me. Mostly because I really don’t recognize this Blue Beetle.

Who is he? I used to love Giffen’s take on Ted Kord. Man, was that a fun time. I was hoping for that. Or something similar. Instead, what we get is some schmucky third rate knock off of Ultimate Spider-Man. It wasn’t much fun. But it was highly annoying.

Kolins has never really impressed me with art either. He was always okay at best. If he calmed down, I might enjoy it. But this isn’t very good either. Groan. Hopefully, it’ll improve or maybe it’ll get put on the chopping block quick. One can only hope. 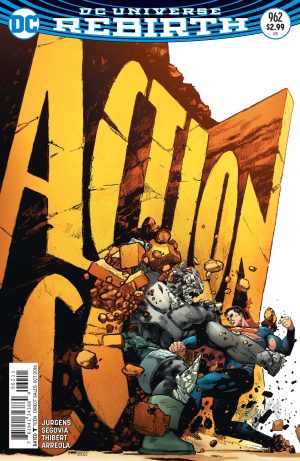 This story was so hard for me to get into, that I am glad that this storyline is over.

That’s it. I was so bored with this story, I have to stop here. The art is nice to look at.

The ending though made me want to vomit.

It’s supposed to be a surprise ending I suppose.

The only surprise is that I didn’t rip up the issue in my hands I suppose.

Let’s hope the next issue gives us something better. I certainly hope so. 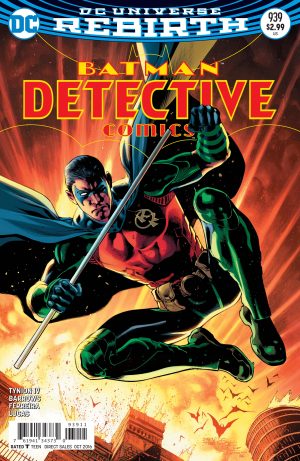 Well, here’s another issue of the Rise of the Batmen. And it was definitely better than the previous issues. That reason is the art of Barrows. The other artist in this storyline just can’t cut it.

But Barrows can and does repeatedly here. He makes the story and art sing. I wish all six issues of the Rebirth had his art. And that is the problem. It made the story very disjointed and not very fun.

Once you got into it, the story wasn’t bad then OOPS INTERRUPTION. And it made it hard to care or like the story. I lost interest. I regained it a bit here.

I know they want to make money but DC should rethink this fill in artist crap especially in the way of big storylines.

This is the one that suffered the most. And it’s a shame because it could have been really good. Instead: 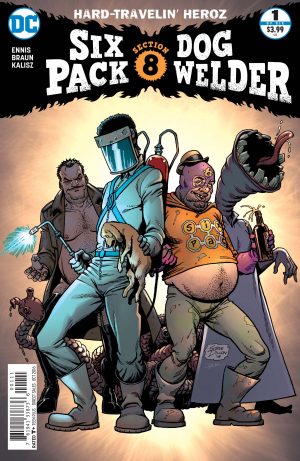 Garth Ennis used to be one of my favorite writers in comics. I think his work on Preacher and Hellblazer are some of the best comics ever written. Somewhere along the line, Ennis got obsessed with war comics. And I kind of just forgot he was still writing. He’s brilliant. But I feel he has passed his peak. This is a little evident in this title.

Branching off of the Section Eight comic that was just released, we get this comic. Six Pack and Dog Welder are both fun characters. They really are. And Ennis has a good time with writing them. Sixpack is trying to keep his team together. But they are rather crazy. But he feels he has to at all costs.

Ennis feels here like he is trying to imitate Ennis from years ago. It’s okay. I laughed once or twice. But it pales in comparison to classic Ennis (word of disclosure…I wasn’t crazy about The Boys either)

Braun does a decent job on art. It’s a pretty decent book overall. But I long for the days of classic Ennis, like True Faith, Dicks, and even Hitman. I loved those days. 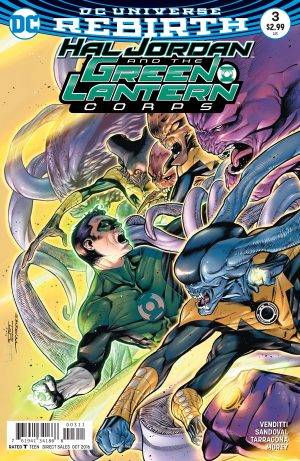 Besides a great last panel and getting to see Guy Gardner in action a little, this was a just not fun at all. I wish there was something more going on. There’s just nothing to grab onto.

Venditti is a fine writer. His books for Valiant are spectacular. Yet here he stumbles.

I know he can write a book. But the characters he is writing? I know nothing about them. I don’t recognize them.

And I have known them for years.

The art isn’t half bad. But I can’t tell much from it because I lost interest.

I want a stronger creative team. This book is so far away from what used to be good. Venditti had a few good issues before Rebirth. But I think it’s time to pass the Lantern. 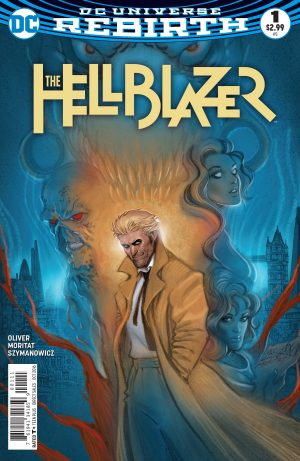 Man, this character used to have balls. Now he doesn’t even have baby balls.

The problem starts with Oliver’s handling of him. Constantine should be wily yet dangerous. This guy? Who is this guy? He’s barely with any edge.

The old Constantine would kick this guy in the teeth.

The whole thing read false to me. You know what, bring back Garth Ennis. He knew what to do.

I want Vertigo Hellblazer back and not this cheap dollar store knockoff. Boo. 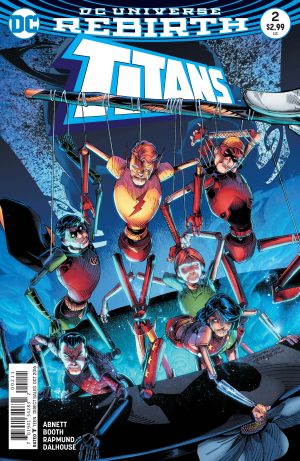 Yay! Titans! This is by no means a great book. In fact the story is rather bland. Yet I loved it anyway. Two words: Brett Booth.

This is part two of “The Return of Wally West” and it’s fun if just a little too predictable. Abnett is a serviceable writer and he does okay. Where the book flies off is with the art of Brett Booth.

Man, Booth has energy! He brings up the quality of any book. The layouts and the storytelling are so wild and fun. I can just flip through a book and enjoy it on the basic level. I don’t even know what is going on half the time, yet Booth makes it fun.

I’ll be reading this book as long as Booth is on it. Then, I’ll stop. Had it been anyone else this book would have been a C-. For Booth? 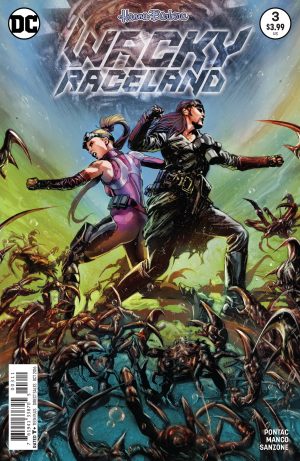 The title of the story is “Poseidon’s Toilet.”

Yet, it should have just been called crap. Because that’s what this is.

WHAT IS THE DEAL WITH THESE HANNA BARBERA TITLES???

It’s like DC Comics is determined to bury them and some older creators with them. The creator taking the hit here is Manco, who is still a great artist. But here?

Wow is this bad.

Look, Manco is a talented artist. Put him on Hellblazer watch the results.

I have no words except I couldn’t finish it.

This is comics at it’s worst. And saddest. 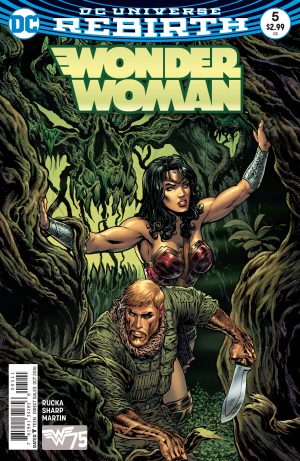 Well, this is the week of Wonder Woman that isn’t Year One. This is modern time Wonder Woman. And it’s back to being okay. Not great but by no means horrible. And sometimes that’s the best you can ask in a DC Comic these days.

Rucka has an okay handle on the character. He’s a good writer. The title is just schizophrenic with the two concurrent stories going on. Makes it tough to grab onto anything.

Sharp does okay with the book. I feel like he would be a better artist if he had more time to draw it. So we get the watered down version of him.

Not a bad book overall, just okay. I would like spectacular though in all my comics. Or at least some with bigger aspirations.