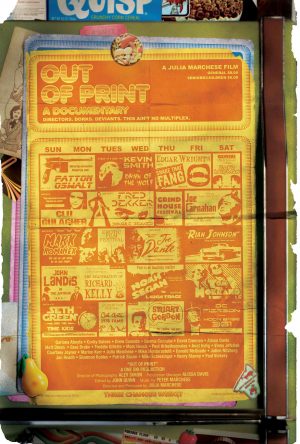 Any passionate film lover worth his or her salt has been to a film revival house.

Obviously, big city dwellers have the advantage; I lived in Philly for almost twenty years, and over those years spent many hours at the Theater of Living Arts and Temple Cinematheque (both LONG gone, alas), the International House in West Philly, etc.

There was – and still is! – the wonderful Exhumed Films, an incredible “mobile” repertory company for genre film; they would play multiplexes, drive-ins, etc. to a rabidly loyal crowd.

There are also newer additions like Eric Bresler’s terrific PhilaMOCA. Still, even as a high schooler in relatively small-town Bethlehem, PA, in the late 80s, I could catch the “Violence in Cinema” series at the local community college to see The Warriors and A Clockwork Orange on the big screen. Hell, my senior year of high school I dragged a friend (who never really forgave me) to a screening of John Waters’ Female Trouble at Lehigh University’s Chaplain Series. (Yes, you read that right: the film where Divine famously “rapes himself” was part of the CHAPLAIN’s series. And at our screening, said chaplain sat directly behind us and guffawed through the whole movie, much to my friend’s horror).

When I moved to LA ten years ago, I was told I NEEDED to go to the New Beverly Cinema ASAP.

Ironically, the first film I saw there was a sneak of a brand new film, Steven Soderbergh’s ill-fated The Good German. But I loved the vibe of the venue and the audience, and I went back as often as I could (which is not NEARLY as often as I’d like).

The new doc, Out of Print, is a celebration of revival houses, but its main focus is the New Beverly. Thus, at times, especially at the outset, it smacks of a fawning ad for the venue. But it avoids any embarrassing genuflection while still delighting in the many wonderful aspects of the theater.

We get to meet a handful of the many regular patrons, including actor Clu Gulager, a familiar face to Western and horror fans. His story, as well as several others, brings some unexpected emotion to the film.

There are many amusing, touching and dramatic anecdotes about the New Beverly spanning the decades, and of course, everyone chimes in on the importance of revival houses, seeing films in a dark theater full of strangers, and the importance of “film” itself.

I read some postings online that referred to this film as a bunch of out of touch fuddy-duddies who refuse to acknowledge progress. They’re missing the point. Certainly there are some die-hards who will never accept the digital format, but the main thrust of the argument here is that many older films are ONLY available to be screened theatrically via a film print. Many distributors and studios won’t make the majority of their catalog available digitally (the theatrical market is too small for older titles) yet don’t keep up, or even keep, film prints of these titles.

There are other well-rendered arguments here that should be discovered by the viewer, by the likes of Kevin Smith, Edgar Wright, Joe Carnahan, John Landis, Joe Dante and more.

(There’s a clip of Dante at a New Bev screening of The Howling, which I attended with my fiancée, Emily and friend, Marc. Afterwards, the three of us chatted with surprise guest, special effects master – and notorious recluse – Rob Bottin. A memory to cherish, and my personal plug for why venues like the New Beverly are so invaluable).

Out of Print certainly pays homage to the other great revival venues in LA: Cinefamily, The Egyptian, etc., and even includes a tribute to its “sister” theater in London. But its focus remains on the New Beverly, and that’s as it should be.

By keeping it specific, Out of Print makes the argument universal. Out of Print is brisk, informative and quite entertaining. Even if you’re a hip, “film-is-dead, long-live-digital” acolyte, if you still love movies, check out OOP with an open mind.

Out of Print concludes with a truly lovely anecdote related by Patton Oswalt about a screening of Casablanca he attended at the New Bev. It’s a touching memory of an experience one can only have at a great revival house, and the perfect ending to this film.

Though you should stick through the credits for some amusing bloopers…