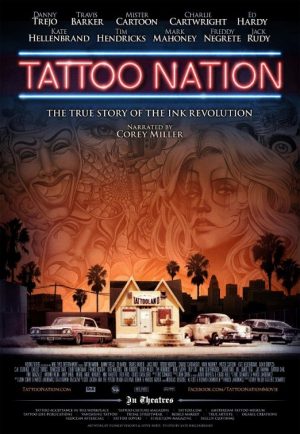 I kept putting off watching this one. I’ve had pneumonia recently, I’m working long hours and I’m getting married in a few weeks.

Also, I had very little interest in the subject matter. I came very close to getting a tattoo when I was in the Marines years ago, but had second thoughts while sitting in the parlor chair.

Otherwise, I’ve admired some art here and there over the years, but that’s the extent of my curiosity.

So the last thing I wanted to do at the end of a very busy, long, stressful day was sit down to watch a documentary on tattoos.

One of the nice things about being a critic is sometimes you’re “forced” to watch movies you’d otherwise NEVER bother to see. Granted, sometimes these movies turn out to be painful experiences that make you rethink being a critic at all. But other times you’re rewarded with a truly pleasant surprise.

Even though I would have much rather watched a mindless action movie at the end of said long day, I forged ahead and started Tattoo Nation with a big, frowny face.

Director Eric Schwartz sucked me in almost instantly despite my resistance with deft, lightning-paced handling of the material.

There is some incredible jailhouse ingenuity recounted here. Tattooing was illegal in prison, so inmates would convert cassette motors (cassette players were, at one time, distributed to the prison population) into tattooing needles. The motors provided enough juice to do the job and the motors were relatively quiet.

The inmates would also burn up pages of their bibles or other books, add some baby oil or water to the ashes, and extract usable ink.

Schwartz makes use of interviews with a lot interesting players in the tattoo world, such as Ed Hardy, Freddy Negrete, Mister Cartoon, Charlie Cartwright, Catfish Carl and others. This list may well be old hat to tattoo aficionados, but these guys were all new to me (hey, Danny Trejo is in the movie, too – I’ve heard of him!!).

But they all have quite interesting anecdotes, testimonies, back stories. And strong opinions. Schwartz does a nice job of combining the talking heads with some well-chosen archival footage.

I can’t speak for diehard tattoo folks (though I think they’d enjoy the film), but to this utter novice, Tattoo Nation did a terrific job of exploring the history of tattoos in a hugely entertaining way.

And man, there is some UNBELIEVABLE art on display here!

So, at the end of a long day, I got what I didn’t realize I wanted: I was transported to an unfamiliar world for 90 minutes, away from my worries, and by golly if I didn’t learn a thing or two as well.