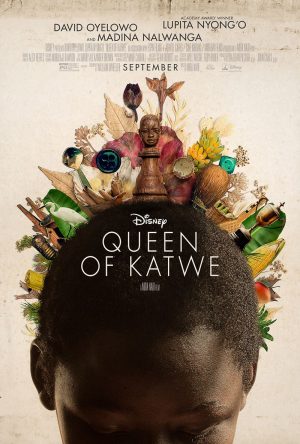 In a sea of teenage dystopian, apocalyptic movies it is refreshing to watch a film about a young person who beats the odds with nothing but the power of her mind and the love and support of her family and friends.

Based on a true story, Queen of Katwe is about Phiona Mutesi, a poor, uneducated girl from a Ugandan ghetto who triumphs over her circumstance through learning the game of chess.

Queen of Katwe is a filled with stellar performances from Oscar favorites and newcomers alike. Set against the backdrop of a level of poverty few Americans could ever fathom, Phiona Mutesi’s family struggle to survive.

Raised by a widowed, working mother, Phiona is the middle child of 4 children. Unable to afford school, all but the youngest child work to scrape enough money together to exist. In her daily trug, Phiona discover a group of children being taught to play chess by the local missionary outreach program. Lured by the promise of a meal and intrigued by game, she joins the group. Robert Katende, the chess coach, realizes Phiona’s precocity for the game and helps her and the other children tackle the obstacles that would keep them from competing on the same level as their wealthier, educated piers.

Although presented in an age-appropriate way indicative of a Disney film, Queen of Katwe does not shy away from the harsh reality of an impoverished life, especially the challenges of woman in its society.

From Phiona’s fierce but loving mother, played by Lupita Nyong’o (12 Years a Slave, Star Wars: The Force Awakens) who goes literally sells her own clothes to make sure Phiona has enough light to study by, to David Oyelowo’s (Selma, Star Wars; Rebels) Katende the chess coach, who must weigh providing a better life for just his own family against a chance to better the life of all the children in the chess program, each person faces the challenge of simple surviving or striving for something greater.

In her first feature film Madina Nalwanga gives a heartbreaking performance as the young Phiona. Her portrayal of the underdog is kept from caricature by Nalwanga’s very grounded and realistic tween quirks. The dynamic between her and the other young actors and actresses is engaging. No matter your background there are experiences that every young person goes through, and the children in this film make you remember your own experiences of find your place in the world. I was not the only person in the theater to feel this way. It was a delight to be with an audience that clapped at Phiona’s triumphs and and sniffled at her failures.

Phiona Mutesi’s story is not easy to watch. The dangers to a young girl in her situation are many. For many others in her neighborhood the only way out is to find a man to support them, and many times it is only marginally better than where they have come from. It is inspiring to see how each character continues their fight while maintaining their integrity.

Queen of Katwe is a well made film that will have you cheering in your seats. Just make sure you bring a couple of tissues with you. You are going to need them.