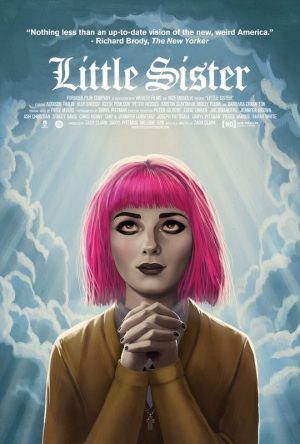 I really wanted to like this quirky indie about Colleen, a former Goth girl (and now novitiate nun) who returns for an awkward family reunion at Halloween, but its faint charms failed to win me over.

The film is sadly too low-key to really engage viewers on any level. A few fun scenes like the family’s spirited Halloween party are just too far and few between.

As Colleen (Addison Timlin) is very likable and recalls Mary Elizabeth Winstead in Scott Pilgrim Vs. the World, especially when she dyes her hair pink, as in the film’s poster.

The contrast of her as a demure, make-up-free nun at the beginning of the film with the resurgence of her Goth identity is moderately amusing, but the dissonance between her two identities is never really addressed.

The film has some memorable moments, such as when Colleen goes full Goth again to cheer up her reclusive, terribly scarred veteran brother (Keith Poulson) by donning a white nun outfit, white face paint and lip-syncing to what I assume is a GWAR song since the band is frequently referenced. (Although, in my Goth days, I was definitely not listening to thrash metal or heavy metal.) And when a little boy encounters the two strange-looking siblings in the woods and asks them, “Are you monsters?” to which they naturally reply, “Yes.”

Ally Sheedy goes all out as Colleen’s unreliable, pot-smoking hippie mom, but by the time she explains why she’s opted out of being a good mom in what is supposed to be an emotional scene, we don’t really care.

When Sheedy spikes her family’s Halloween cupcakes with some extra-strength pot, the results finally kick some life into the film, but it’s too little too late.

I expected a lot more depth to a film in which a Goth-turned-nun tries to reconnect with her battle-scarred brother, but the film is unfortunately stuck in Indie Lite Mode. I wish it were the “schmaltz-free, pathos-drenched, feel good movie for the little goth girl inside us all,” the PR promised.

Little Sister opens at The Metrograph in New York (and nationwide on all digital platforms) on October 14 and The Arena Cinema in Los Angeles on October 28.