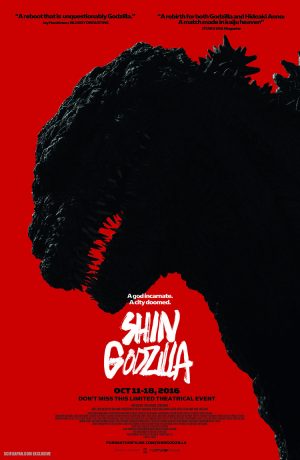 The King Of Monsters is back after 12 of dormancy and he is bigger and better than ever before!

But wait!? What could you mean, Benn? I just saw a Godzilla film two years ago!

You might be thinking of the American Godzilla film put out by Legendary Pictures and directed by Gareth Edwards (Rogue One: A Star Wars Story).

Toho has hired writer and director Hideaki Anno, the mastermind behind the critical and commercial phenomenon, Neon Genesis Evangelion, along with his long time collaborator Shinji Higuchi as co-writer/director to bring the original Kaiju back better then ever.

Not wanting to mess with the already established history proceeding this film, Anno and Shinji chose to wisely do a clean reboot of the monster as if he had never existed before.

This film is VERY Hideaki Anno and his signature shooting and editing style is prevalent throughout the film. Watching Shin Godzilla was like watching a live action Evangelion movie but with Godzilla and that isn’t terrible at all. What really worked is that it is also very much a loving throwback and homage to the original 1954 Godzilla from the shooting angles right down to the look of Godzilla itself.

Unlike the recent American Godzilla film that, I thought, did a great job at hinting at and teasing the audience with seeing the monster, this film straight up throws it in the spotlight and isn’t afraid to be like “Here you go. But this isn’t like you think!” Hideaki and Higuchi do a remarkable job at giving you what you want but not how you think it is going to happen. If that sounds cryptic it is because I don’t want to spoil the fun I had seeing it with absolutely no spoilers for you.

Fast paced and intense, Shin Godzilla does something I wasn’t expecting and that is, it shows the frustration and insane amounts of bureaucratic red tape that the Japanese government faces in not only every day decisions, but also if a truly life threatening dangerous event were to befall the country. Much like the original Godzilla and its allegories to the US’s dropping of the bombs on Hiroshima and Nagasaki this film shows the real life problems Japan must have faced dealing with the tragedy and the literal fallout from the Fukushima nuclear power plant disaster. Government committee meetings and procedurals haven’t been this exciting since Michael Bay’s take on NASA in Armageddon.

These dramatic scenes of debate and bickering juxtaposed with the total carnage and destruction wrought on by Godzilla’s rampage through Japan is both harrowing and disturbing to watch. They have found a way to make this experience of watching Godzilla just as exciting and thrilling as when I first saw the black and white original on Creature Double Feature on Saturday afternoon as a kid.

Anno’s signature brand of humor is also perfectly used to relieve the wringing tension felt by the characters in the film and audience alike. I was actually thrown off and pleasantly surprised to see just how intentionally damn funny this film was. Each release of humor was strategically placed like a surgeon to not only break the monotony of the government meeting scenes but also as a breath of relief from watching the sheer terror the citizens are going through as they try to evacuate one of the most densely populated cities in the world.

Fans of Godzilla, which the sold out audience was completely comprised of on opening night, were more than satisfied as this film not only held true to the traditional Showa Godzilla films as well as the 80’s Heisei series too.

This film is insane and beautiful, exciting and heartbreaking, a real emotional rollercoaster. There are moments of true horror and moments where you will laugh your ass off. There is even have a moment of pause as you realize that when faced with a true terror, the real monsters might be mankind itself.

I expected nothing less from the man who brought the world one of the most thought provoking and introspective animations of all time. One that even 21 years later makes people think.

It is only playing for a very limited time in America thanks to the folks a Funimation and tickets for shows went on sale in early September, but if you can find tickets and you are a fan of Kaiju, Godzilla or Neon Genesis Evangelion, you owe it to yourself to go and see Shin Godzilla, also known as Godzilla Resurgence here in the states. My hope is that it get a wider release in the theaters soon because I really need to see it again and it is completely sold out around me in New England.