Goodness gracious! There was no getting through this past week as a black nerd without seeing Marvel’s Luke Cage series on Netflix.

Unfortunately, I am not a binge-watcher. The closest I got to that was Battlestar Galactica and Deadwood about 10 years ago, but then I was living alone with no friends and nowhere to go on my days off. So it’s gonna be a while before I finish the entire season.

But, from the first few episodes I have seen so far, Luke Cage is just fine. And, in other ways, it’s shocking. Shocking that, so far, the superhero show has been this culturally black and appears to be deeply invested in telling black stories. 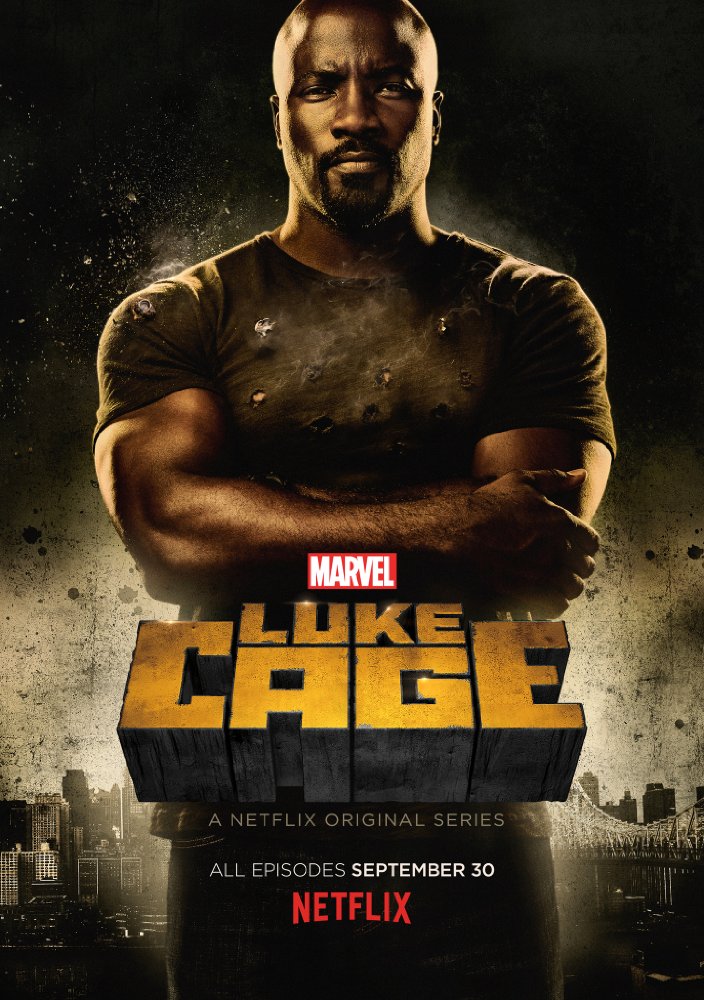 Sure, they may be black stories we’re used to seeing – the reformed hoodlum, the gangster trying to go legit, the politician with dirty hands, the frustrated hero just trying to lay in the cut. But, in the superhero genre, not so much.

As excited as I am about the upcoming Black Panther movie, Luke Cage likely will be the blackest show, by far, that we’ll see in the Marvel cinematic universe.

Not only is it because of the tone that marries 1970s blaxploitation with 1990s gritty realism – two golden ages of black creativity. It’s not only the elements of Super Fly, Shaft and Truck Turner combined with The Wire, Boyz N The Hood and Spike Lee’s visions of New York.

Nor is it a soundtrack that mixes funk and hip-hop, and puts Raphael Saadiq and Faith Evans in crime lord Cornell “Cottonmouth” Stokes’ club. It’s not even that everyone in this Harlem has a nickname, reminding me of my father in North Philadelphia’s infamous Richard Allen housing projects. 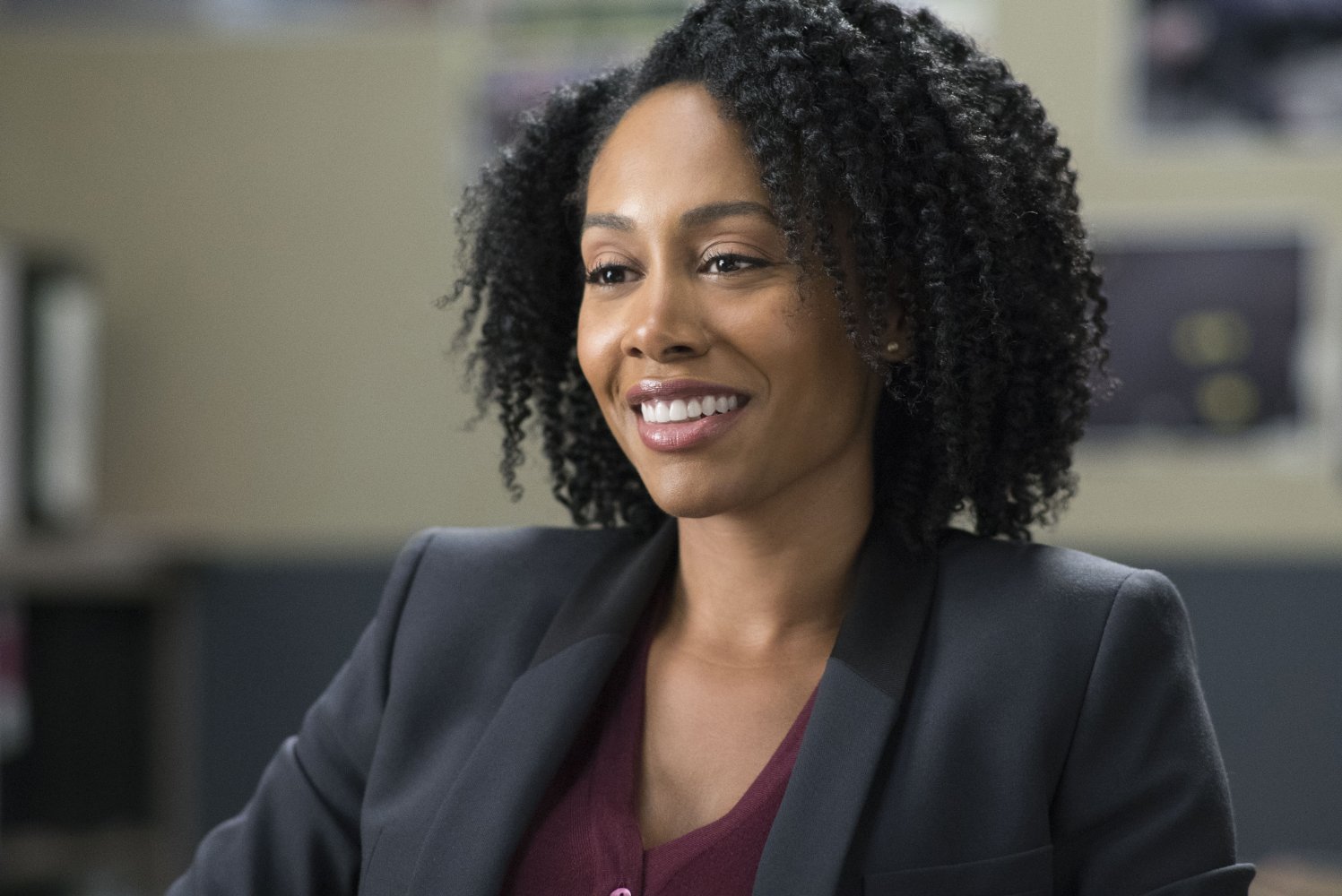 It’s not even that the best character in the show is Misty Knight, the police detective and former round-the-way girl who keeps her ears to the streets despite working for an organization that oppresses folks on those same streets. And that she does this with unmatchable cool, steely resolve and mature sex appeal, thanks to Simone Missick’s performance. In 2016, to discuss blackness means talking women just as much as men.

All those things are great.

But it all comes comes down to what we saw in the first trailer: a bulletproof black man in a hoodie. 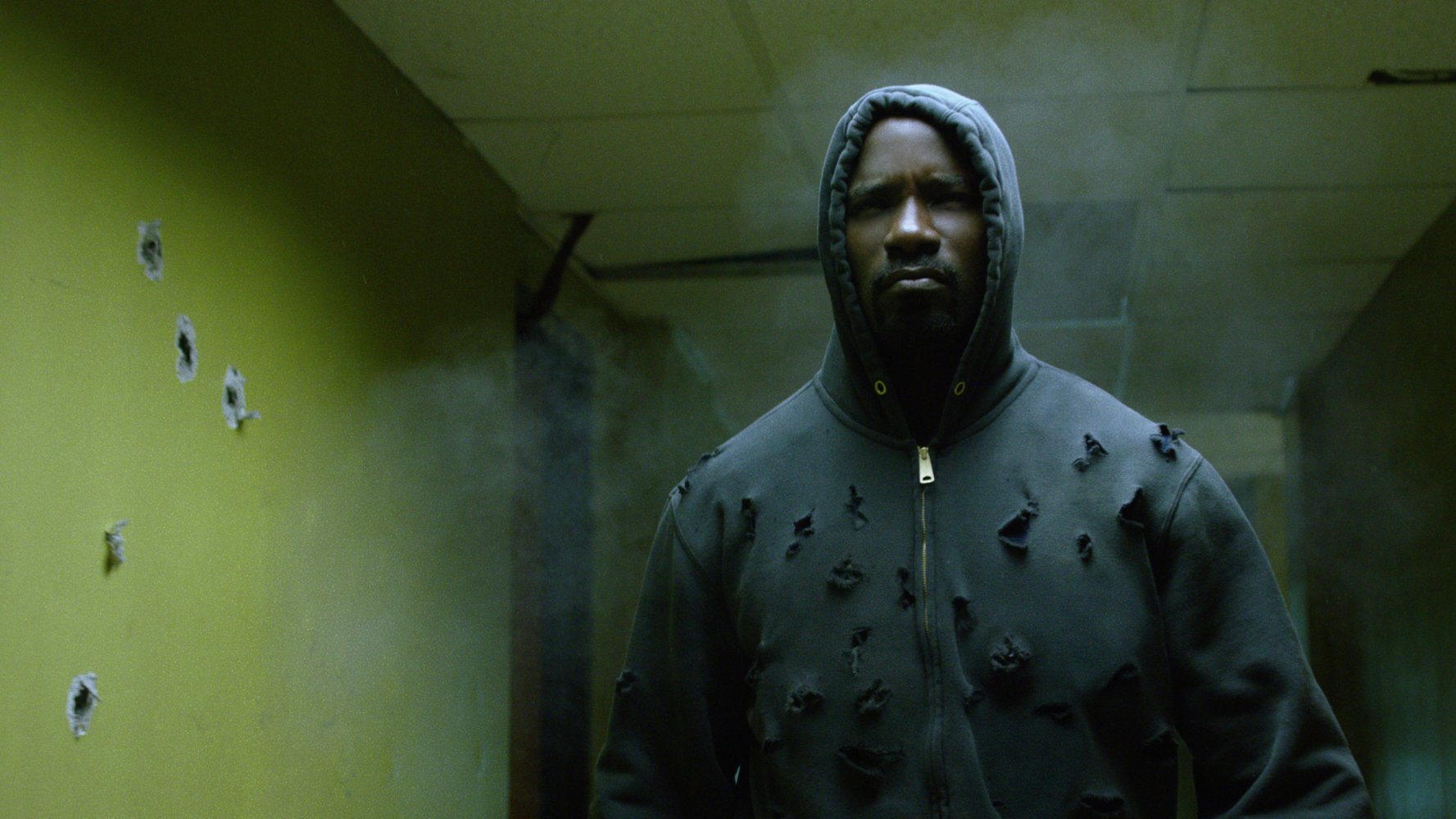 If superheroes are power fantasies and wish fulfillment, then if only Luke Cage could have wrapped his arms (and they are sizeable on star Mike Colter) around Trayvon Martin the same way he shields that boy in Pop’s Barber Shop.

Martin was killed four years ago already. Mike Brown was killed two years ago, then Black Lives Matter went national. We can’t go a month without new videos of more unarmed dead. Amid the years of concentrated personal and psychological turmoil brought on by an endless parade of state-sanctioned black death, now I’m watching a man whose very skin deflects bullets.

Then there’s the parallel discussion of violence in black communities. Black people have spent large amounts of time combating, protesting and discussing what to do about that violence. And detractors of BLM and people opposed to discussing police brutality often bring this up as the “What about black-on-black crime?” question. Or, these days, “What about Chicago?”

On this tip, Luke Cage plays to wish fulfillment inside black communities of those of us who see the crime and want to storm the stash houses ourselves.

So far, Cage is presented as from outside Harlem – a change from the comics – though the fugitive angle is interesting when connected to Harlem as a place of black rebirth and identity. Cage says, “I am who I am. Or maybe I have a chance to find out who I could really be.” 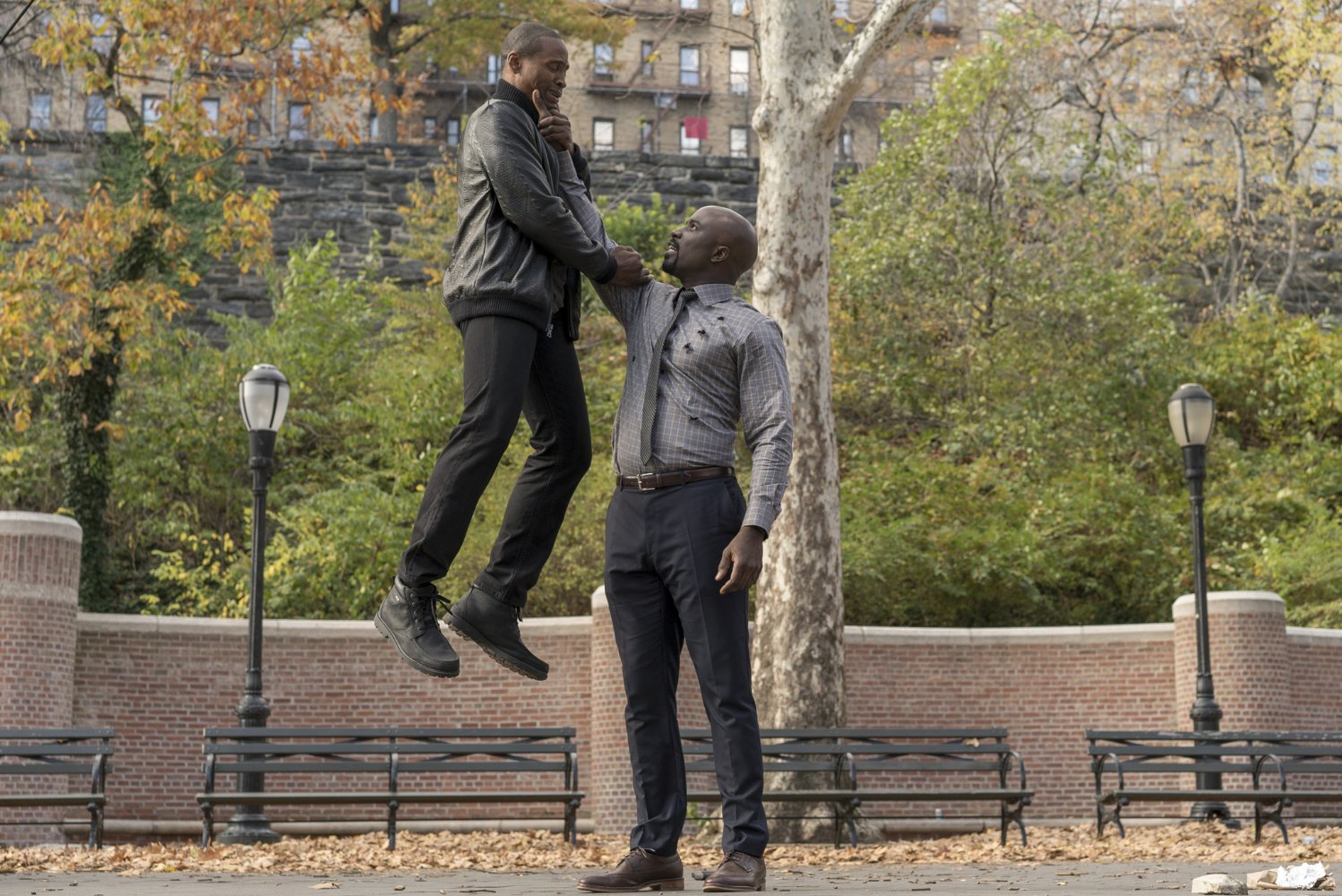 Strong-arming our way through drug dealers and gun runners is pure fantasy, however. We know it won’t cure the fact that there aren’t enough jobs to keep people off the streets, nor that they are forced to huddle together in concentrated poverty in the first place.

I’m hoping, though, that we’ll see Luke strike against the system that holds people down in Harlem (and, these days, is forcing them out) as much as taking on street criminals there. A show so mindful of John Shaft and Easy Rawlings knows it’ll have to get to crooked cops and systemic injustice, too. As we say, there’s levels to this shit.

At this point, we’ve gotten some of that through organized crimelord Cornell “Cottonmouth” Stokes and his cousin, city councilwoman Mariah Dillard. (In the comics, Dillard is the gang leader Black Mariah. So I wonder how this will turn on the TV series.) 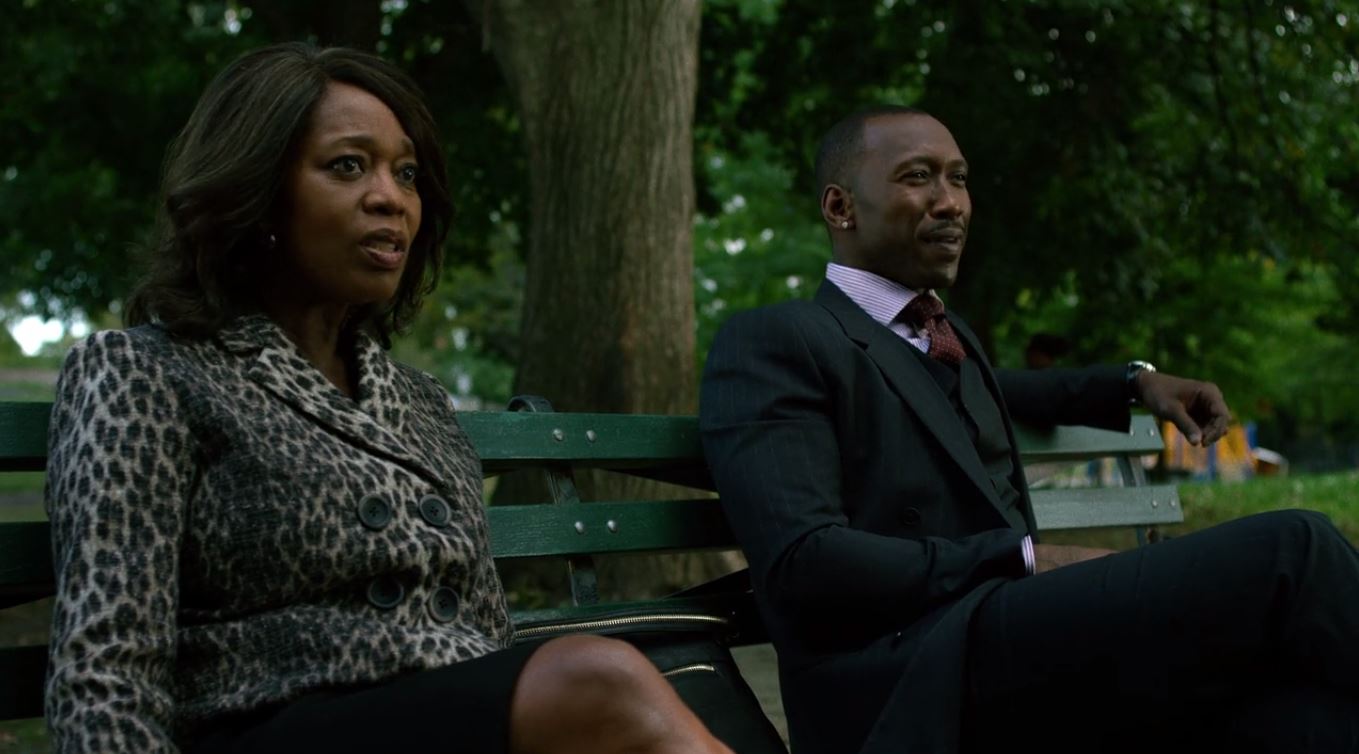 Cottonmouth and Mariah’s conversations are a little too repetitive for my tastes. But we’ve gotten some great soundbites about black liberation. Whether to transform all of society to something greater, by respect and dignity, or to grab the same power as the white man, by the same means.

Mariah says to Cottonmouth, “Respect. It’s all that ever really matters.” And he replies, “Money outlasts respect. Respect will put your name on the side of a building, but the money that put your name up there comes from someplace.”

Heh. Reminds me of Chris Rock’s joke about how only the white man gets to profit from pain, and my adage that all great things built by humans have blood and bones in the foundation. 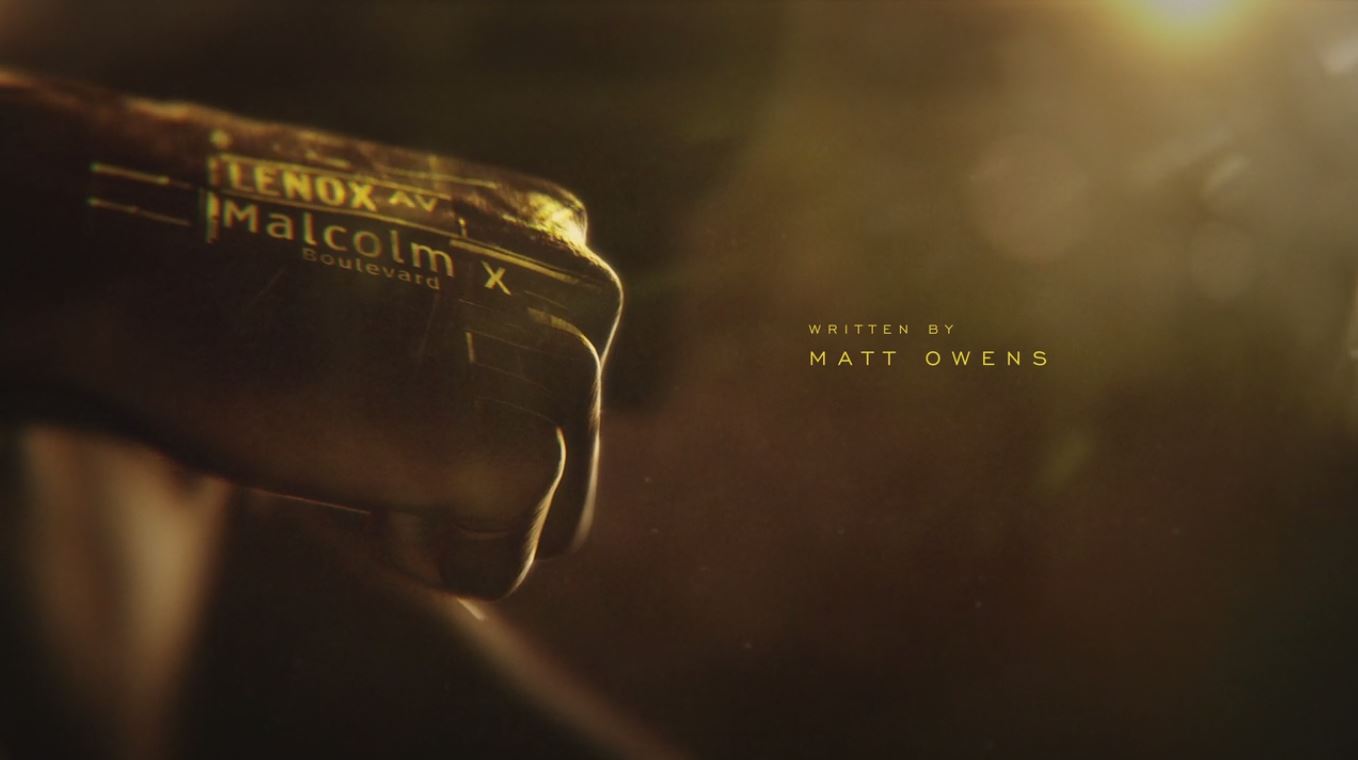 Eventually, I’ll get to Daredevil Season Two, even if the whole logic of “vigilantism works as long as you don’t kill, but seriously maiming dudes is fine” really makes me roll my eyes on that show.

I will go back and watch Jessica Jones to see a superhero interpretation of women living after abuse, and a villain whose power is a hyped-up gaslighting reminiscent of Wonder Woman’s old nemesis Dr. Psycho. (And introduced Cage to us in the superhero sex scene heard ‘round the world.)

But I’ll tell you what: If Marvel’s as smart as they have been with their TV shows and movies, they need to get Misty Knight a series going.