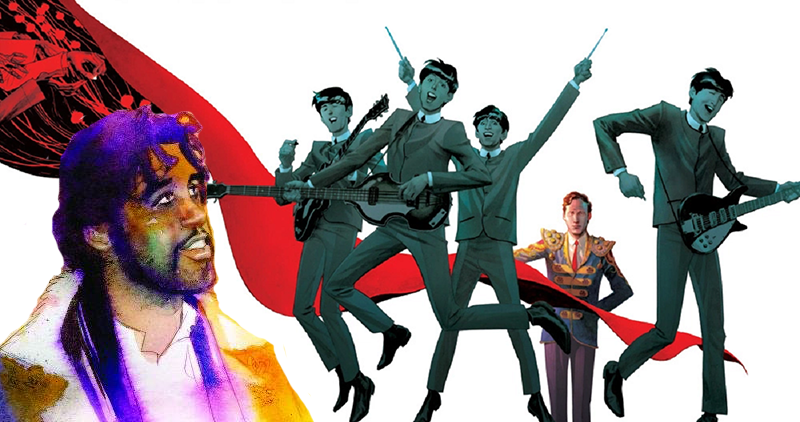 Last week, Dark Horse Comics’ M Press published an expanded edition of The Fifth Beatle: The Brian Epstein Story, marking the first time that the #1 New York Times bestseller and award-winning graphic novel has been published in paperback.  Written by Tony Award-winning Broadway producer Vivek J. Tiwary (Green Day’s “American Idiot”) and illustrated by acclaimed artists Andrew Robinson (Starman) and Kyle Baker (Nat Turner) the award winning The Fifth Beatle is more than just the untold story of the man who created Beatlemania, it is a timely and timeless exploration of pop culture, music, sexual identity, prejudice and the idea that all you need is love.

Vivek took some time to discuss the book, his favorite Beatles album and his appreciation of Epstein, his historical mentor.

FOG!: I read The Fifth Beatle when it first came out and reread it before this interview and was pleasantly surprised that I enjoyed it even more the second time. In the Afterword, you discuss your discovery of both Brian Epstein and how he became your “historical mentor”. At what point did you feel that you wanted to tell his story to a broader audience and what was the genesis of turning that story into a graphic novel?

Vivek J. Tiwary:  Thanks!  Shortly after producing A Raisin In The Sun on Broadway, I was looking for the next story I wanted to tell… I realized that as proud as I was of Raisin it is a revival of a classic piece of African-American literature—and for my next project I wanted to tell a “new” story. Something previously untold, and also inspirational. I had already been researching Brian Epstein’s life for almost 15 years in pursuit of my “Historical Mentor,” and I thought, “No one has told his story yet—so why not me!” 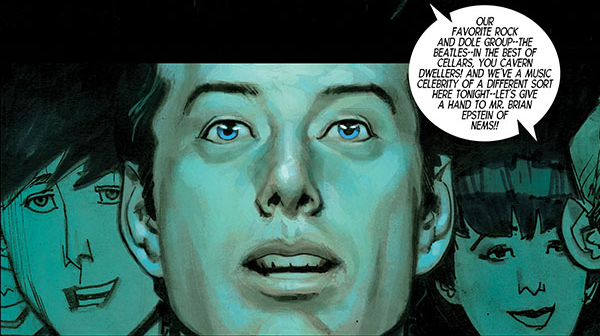 I’ve also always wanted to write a comic book. I grew up reading comics and adore the medium. As I started to imagine the story in my head, I immediately thought of color palate. Starting in 1961 Liverpool—dark, gray, drab, a little depressing. Ending in 1967 London—the summer of love, the dawn of the psychedelic era, a Technicolor Dream. So I thought “the arc of the Brian Epstein story mirrors the arc of the movement from black and white to color.” And I believe the media that most effectively uses color as a narrative tool are graphic novels and film/TV. So I immediately knew The Fifth Beatle needed to be both!

One of the things that’s so wonderful about the book is the artwork by Andrew Robinson and Kyle Baker. How did they come aboard this project? 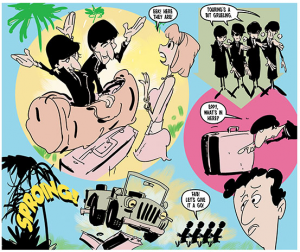 I had known Kyle Baker for many years, since we’re both native New Yorkers and are passionate about the same things, from academia and history to comics and pop culture. We’d long talked about wanting to find a project to pursue together, and I knew Kyle grew up on the Beatles’ and the Beatles’ cartoons—so offering him the “Chaos in the Philippines” sequence in The Fifth Beatle was a no-brainer!

I’m particularly excited that the newly-released expanded edition paperback version of The Fifth Beatle has a bonus section from Kyle with previously-unseen artwork, so fans can see even more of his Beatles art in our book.

I met Andrew Robinson through his agent at the time, Mark Irwin. As a comics fanboy, I was already familiar with Andrew’s gorgeous artwork/talent and I knew he would do a fantastic job with the book—but when we sat down to discuss the project, it was clear that Andrew understood that The Fifth Beatle is more than just an untold Beatles origin story—it is an inspiring human story about an underdog chasing seemingly impossible dreams.

In other words, it was clear Andrew understood The Fifth Beatle: The Brian Epstein Story both artistically and emotionally. And that was what I was most looking for in my primary artist (apart from sheer artistic talent, of course). 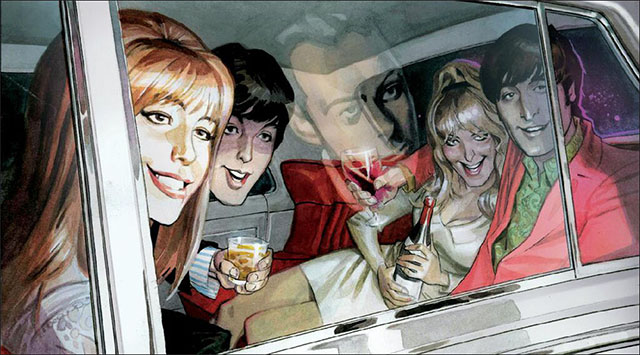 Thankfully, both Andrew and Kyle loved my first draft of The Fifth Beatle script—so I was fortunate enough to secure both of my first and top choices in artists!

The Fifth Beatle has generously made contributions from the book’s profits to the Freedom To Marry and later, Freedom For All Americans. Do you think that Epstein’s homosexuality was difficult for him? Were his prescriptions to help with his homosexuality his idea or imposed by someone else?

Brian Epstein’s homosexuality was indeed a source of great trial and trauma for him. It was literally a felony to be gay in the 1960’s in the U.K. Brian spent his entire adult life helping the Beatles’ spread their great message of love around the world, and yet he died never having had a true boyfriend, and always needing to “hide his own love away.”

At the end of his life, Brian was seeing a doctor in New York, a doctor in London, and a doctor in Liverpool—all who, by their own diagnosis and recommendation—prescribed pills to help “cure” him of his homosexuality.

What’s your favorite Beatles album and why?

One of the things I love about the Beatles is that their albums are all great and so different. So my “favorite” depends upon my mood! That being said, if I had to pick one to take with me to a desert island, it would be Abbey Road as it covers so many musical styles and emotions. But the Beatles song that I think “describes me” the most or is like a “mantra” to me in life is “With A Little Help From My Friends”—and that’s on Sgt. Pepper’s Lonely Heart’s Club Band! So ultimately, I just can’t choose!

What in your opinion made Epstein The Fifth Beatle rather than just a manager?

I’ll start by humbly directing you to these two quotes:

“If anyone was the Fifth Beatle it was Brian. People talked about George Martin as being the Fifth Beatle because of his musical involvement but, particularly in the early days, Brian was very much part of the group.”

And yet there are so many things apart from mere business savvy and marketing style and taste that made Brian “The Fifth Beatle.” If I have to answer this question simply, it would be LOVE. Brian Epstein’s great love for the Beatles, almost thinking of them as the children he knew he would never have (as a gay man in a time when homosexuality was a felony). And like any good father, he would move mountains in service of his “children’s” dreams. 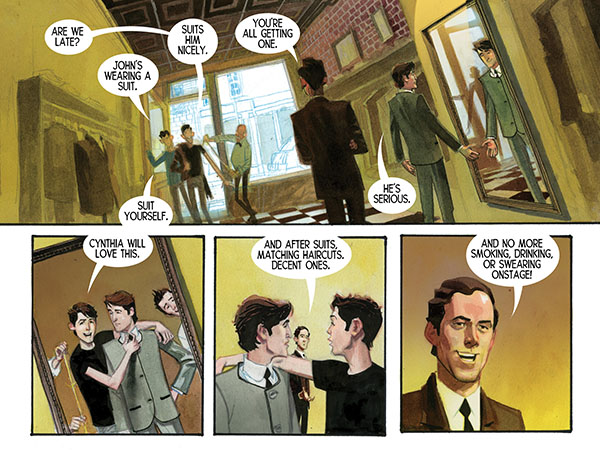 You’re adapting The Fifth Beatle for a television mini-series. What’s the status of the project and any dream cast members? Rereading it I kept thinking Tom Hiddleston would make a great Epstein.

Most exciting, we have secured unprecedented access to use Beatles’ songs in The Fifth Beatle TV event series! We are producing six 1-hour episodes, and we have signed a deal with Sonar Entertainment, a prominent TV production and financing company (The Shannara Chronicles, Tom Hardy’s forthcoming Taboo). I am writing the scripts and have just completed the pilot episode. We expect to announce our director, key cast, and network soon! Follow us on Facebook or on Twitter (@FifthBeatle) for breaking news!

Since we’re in discussions with a few folks right now, I can’t comment on dream cast just yet—but stay tuned for announcements!

I’m introducing my kids (5 and 8 years old) to Avatar: The Last Airbender and we’ve just finished the TV series and are now going through Gene Luen Yang’s wonderful comics. Geeking out would be an understatement!

I’m also re-reading several of Peter Guralnick’s books—from Last Train to Memphis to The Man Who Invented Rock ‘n’ Roll—for research/inspiration, since I’ve started working on my next graphic novel, A Mess of Blues: Colonel Parker and the Unmaking of Elvis Presley. 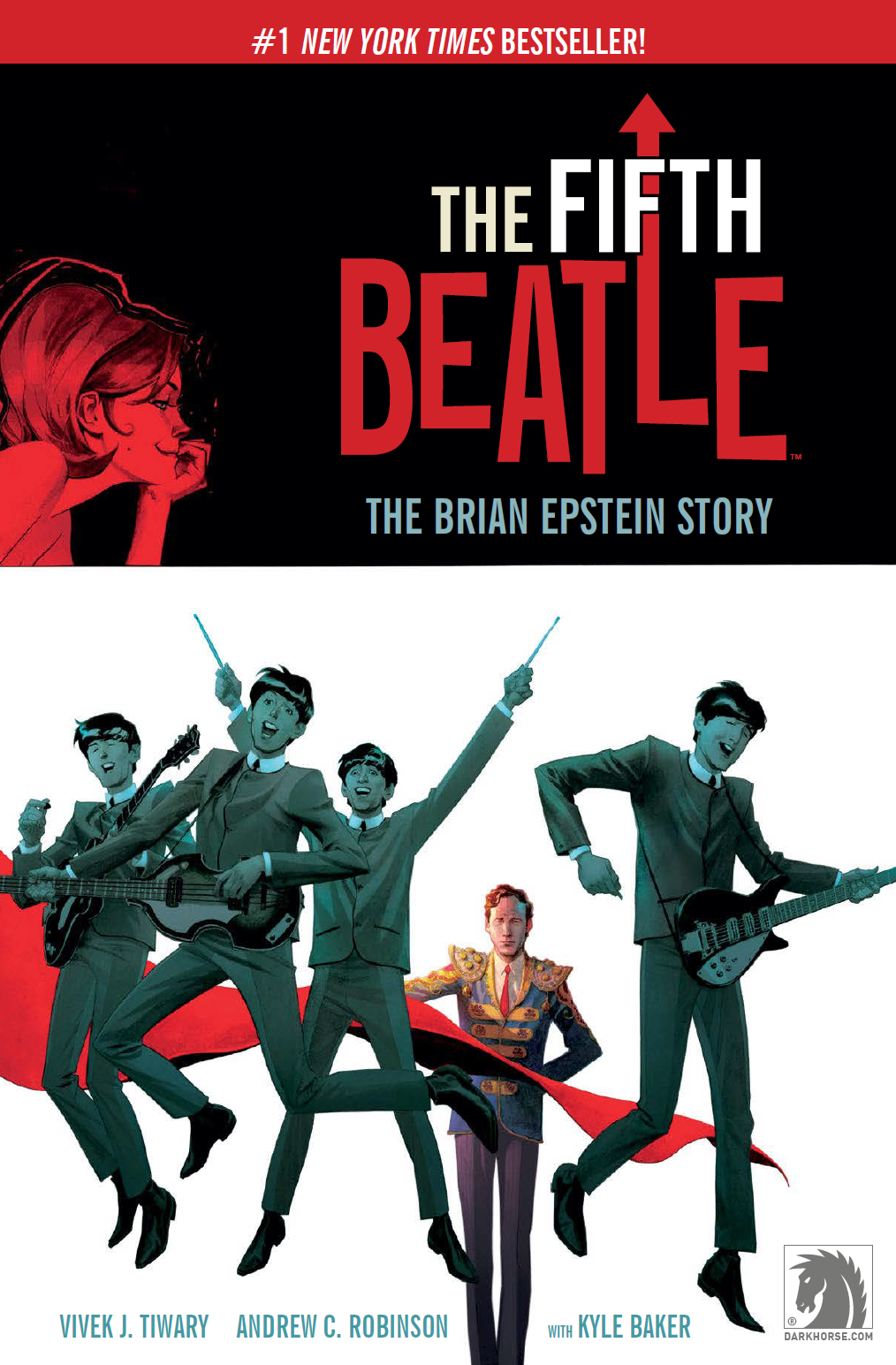