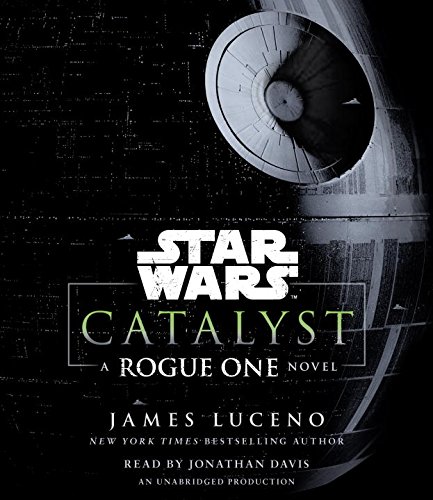 ***Warning: There will be minor spoilers***

“Where’s Poe Dameron?” “Why did they recast Rey?” “How is Darth Vader alive?” These are the questions that Lucasfilm’s super weapon, the Disney marketing machine, haven’t been able to quell or answer for a fair amount of moviegoers as we’re now under thirty days away from the release of Rogue One: A Star Wars Story.

While the title’s subheading takes the place of confusing and detested words such as anthology, companion, or…prequel, acclaimed author James Luceno once again brings elegant cohesion to the political climate of the Star Wars universe by examining the passion and desire of two of the upcoming film’s main characters.

Catalyst tells the story of the connection between Imperial Commander Orson Krenic and energy scientist Galen Erso, played by Ben Mendelsohn and Mads Mikkelsen in the upcoming film, came together to create the first Death Star. Krenic’s manipulation of Erso spans from the Clone Wars and stops well into the Empire’s grip on the galaxy.

Krenic marvels himself as a clever over-achiever while those around him feel he’s talented but short-sighted and arrogant. While that may prove to be true in the movie, here, he has no qualms about playing the long game of deception as he desperately vies for a seat at the table…The Emperor’s table. Krenic is in charge of the project to construct a certain technological terror and needs Galen to make the super laser operational.

Galen is as reserved and scheduled as he is brilliant. Science is his religion and his innate desire to make the galaxy a better place is second to the love he has for his wife, Lrya and newborn daughter, Jyn. Galen studies and experiments with Kyber Crystals, which are used to power lightsabers. He’s beyond fascinated by the powerful organic mineral and hopes they provide the answer to sustainable energy.

Besides the length of Krenic’s manipulation of Galen, it’s cloaked by the deception of friendship. Unbeknownst to Galen, his life in this story is never his own as Krenic knows how his former school chum feels about weapons research. He uses that for the long game with the plan ultimately to force Galen to create the super laser, either unknowingly or knowingly with preference to the latter.

Award-winning narrator Jonathan Davis is no stranger to the Star Wars franchise, with over forty titles to his credit, and Catalyst being his fourth outing with Lucerno. Davis does an exceptional job here as his many voices from Mas Amedda to a 3-year-old Jyn Erso are easy enough to identify while smoothly navigating Lucerno’s superbly detailed writing.

Davis and Luceno provide a tangible strength to Galen’s wife, Lrya. While she has her own career aspirations and is more than capable of achieving them, she supports her husband out of love and a genuine belief that his work will produce real positive change in the galaxy. Lrya’s steadfast nature is akin to a spouse who questions the unquestionable, without pause, to assure her family’s wellbeing.

If I’m right about Lrya’s theatrical fate based on what I’ve surmised from the Rogue One trailers, it will be sad to see her go. While Lrya won’t go down in the annals of important Star Wars characters, there is something warm and perhaps enchanting that stands out about her amongst the turmoil the narrative is embroiled in.

Halfway through the book the story goes from bouncing between Krenic and Galen to a three-way split with some smugglers who are employed to procure arms for a secretive benefactor. It’s an understandable addition, but its connection to the overall plot took too long to pay off and it was audibly verbose. The dynamic between the antagonist and protagonist is so enthralling, that this subplot felt like it interfered for the majority of its play.

Catalyst: A Rogue One Novel is not a must read or listen to in order to get ready for the upcoming film, unless you’re a Star Wars canon junkie. In this novel, we find out when the Death Star officially began construction, why it took so long to complete, how the project got approved, and the answers are very satisfying.

The biggest thing Catalyst accomplishes is that it gives the reader a deeper understanding of Orson Krenic and Galen Erso as we learn their hopes, their dreams, what makes them tick, what anchored their friendship and their considerable contribution to Star Wars lore. While I’m sure that director Gareth Edwards will give audiences a proper introduction to these characters come December 16th, Luceno heightened my anticipation for their first on-screen meeting.