Welcome to a Special Monday Edition of Graphic Breakdown!

Today we will be covering books that are off the beaten path! Let’s get started! 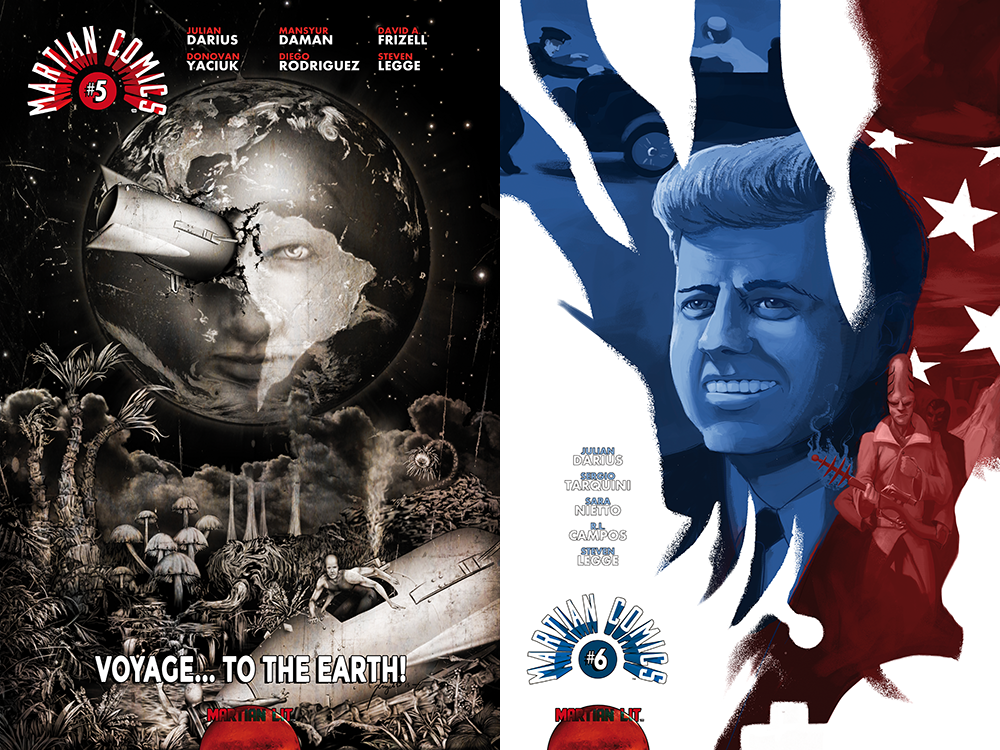 Hannukah has come early for me! The wonderful Martian Comics has delivered issue five and six and I got the chance to read them both. I never thought I would like a comic book like this. These are fun, smart, and well done comic books that I enjoy tremendously.
The story for issue number five goes as follows: Voyage… to the Earth! From prehistoric Mars to its exploration of space, witness how Mars mythologized its sister planet, Earth. Ever wonder what an alien planet’s science fiction would look like? Here is your chance!

The story for issue six is as follows: Our tour through the secret history of the 20th century continues with the truth behind the JFK assassination! Plus, a Kennedy-related side story!

These stories are incredibly intelligent. They border on being literature. Darius is a smart guy and I commend him for writing like he does. The art complements the story wonderfully and this is one unique book. Give it a read and I commend the group for keeping it going, through Kickstarter and other ways. 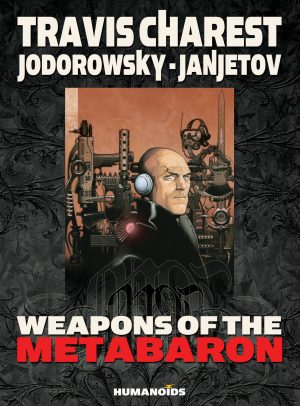 Weapons of the Metabaron

So I read this book about two years back. It’s being reissued so I read it again. And it was as cool the second time as it was the first, if not better.

Jodorowsky is always a wacky time and this is some of Travis Charest’s best work. He wasn’t able to finish the book and that’s a shame, but by god what we have here is totally gorgeous. And Charest got all the press here but Janjetov did an amazing job filling in the gaps. It’s truly wonderful.

This has been a widely criticized book. Some say it’s not as good as Jodorowsky’s Incal books or even the Metabaron hardcover (WHICH I LOVE).

My feeling is that when Charest left the project, Jodorowsky did what he could to save the art, so it got published. Some will complain but I found it to be a beautiful tale of the Metabaron. If you are a fan of Jodorowsky then this book is a must. If you are not, but interested, pick up the Incal first and then come here.

And as far as Charest goes,  I think again that he is brilliant. However, between this and the occasional Spacegirl Comics on his blog (I own one of the few collections of it) he really doesn’t produce much in the way of comic art. That’s a shame. He could be one of the legends. Instead, he may end up a footnote.

Still? He’s brilliant. And this is brilliant art. 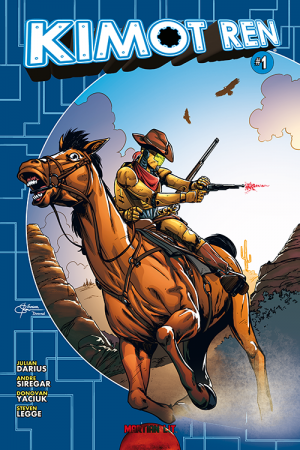 I couldn’t pass this up seeing how Julian Darius wrote it and I really dig his writing. I wasn’t disappointed one bit. This is another nicely written comic book that has intelligence. I was happy reading it.

An alien android lost in the Old West! Mutiny on a flying saucer! An escape from an upside-down crashed UFO, in which the panels are also upside-down! Drunk locals contemplating the universe!

This extra-long first issue has it all!

First off, this is a comic book for ages 17 and up. It works quite well. It’s bonkers and tries to subvert the form. And why not?

Darius is one of the more original writers out there and again he writes a compelling story with good characters. The art is nice as well, and fits the story like a glove.

I’m not sure what the market will be on this on how well it will sell. I have weird tastes and this feels like a comic aimed directly at me….which doesn’t make it commercial at all. Still, I hope it finds an audience. It’s very good indeed. 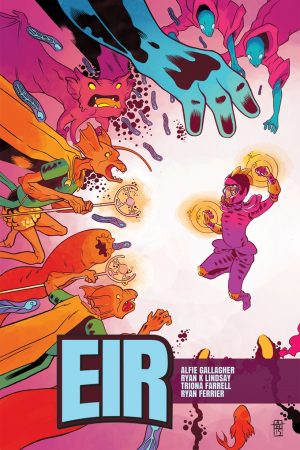 A nice surprise! An all ages science fiction comic!

You have to be happy for this creative team as they raised the money (much like the Martian Lit team) through Kickstarter…and they have come up with a thought out, well done comicbook.

I always say we need more comics for kids and this team proves why.

Sasha wakes to find a sentient sci fi helmet in her room and begins an adventure across the cosmos. That’s the simple premise but the team does a lot with it.

This is great entertainment.

I have a lot of respect for Lindsay. You can see the passion, the love, and the heart he puts into everything he does. It’s impressive. The art is well done too. It’s clear, concise and fits the project well.

It’s amazing how many independent comic books are out there. It’s great to see passionate individuals ply their craft. This is certainly the case here. 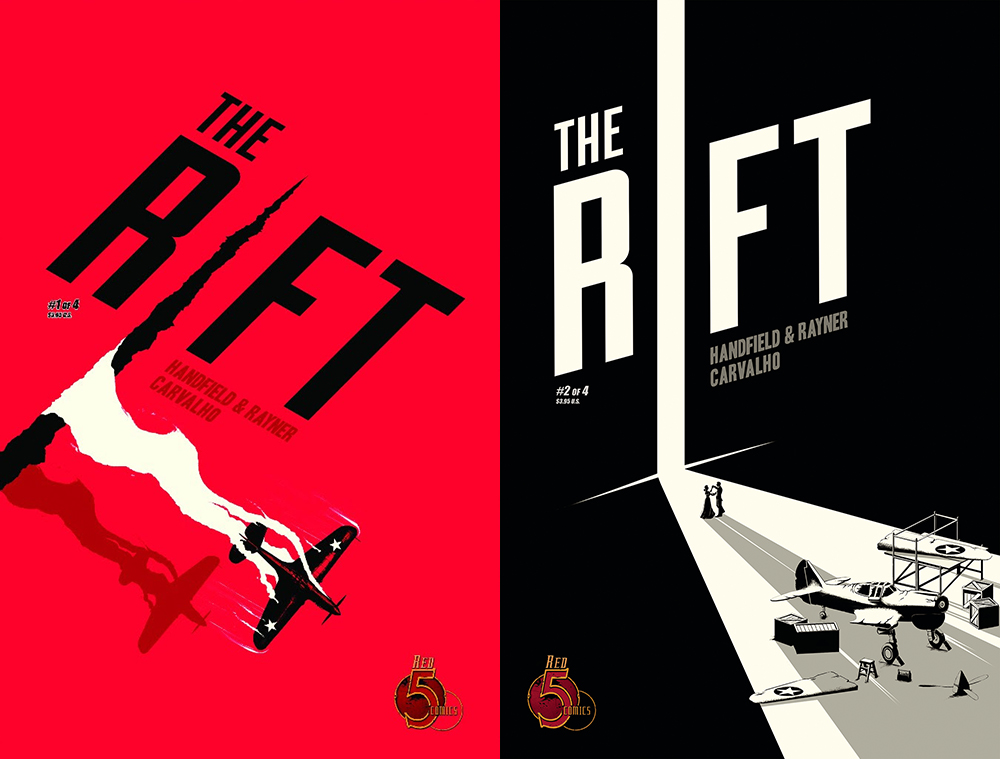 Actor Jeremy Renner has formed a new publishing imprint. I reviewed the first issue of The Rift a little while back and now I get to review the second issue (I’m including the first issue in this review as I forgot what the hell happened in the first issue)

The Rift tells the story of a single mother and her son whose lives change forever after witnessing a WWII fighter pilot from 1941 crash land in present-day Kansas. They find themselves drawn into the work of Section 47, a secret government organization responsible for responding to Rifts that open in space and time.

I liked these two issues. They are again well put together and very enjoyable. I actually can’t wait to see where this book is going. The writing makes it very interesting. And the art is nice as well. Good storytelling all around.

It’ll be interesting to see if they can make a mark in the industry with this comic. But I’m happy to report it’s a good read, and well worth your attention.