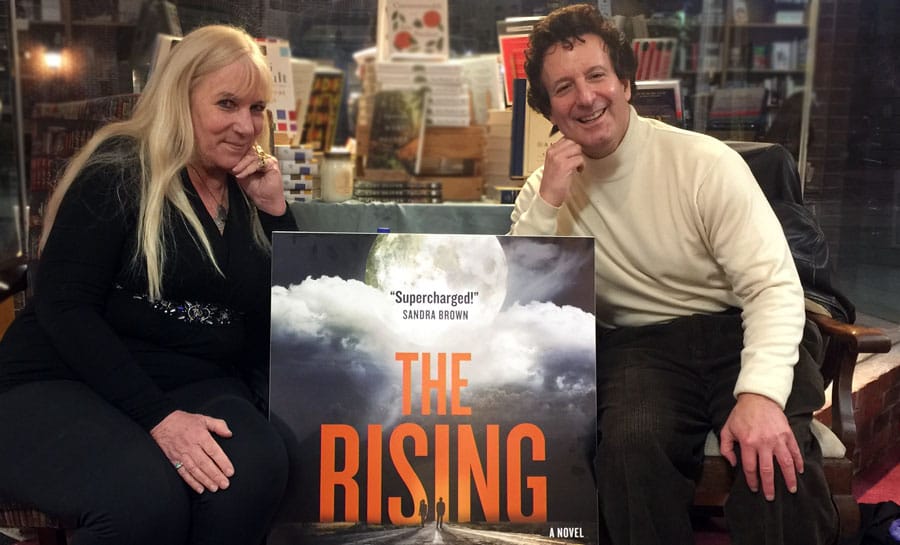 From acclaimed thriller-suspense novelists Heather Graham and Jon Land comes a story of action, X-Files-like mystery, and the endurance of young love in The Rising.

Twenty-four hours. That’s all it takes for the lives of two young people to be changed forever.

Alex Chin has the world on a plate. A football hero and homecoming king with plenty of scholarship offers, his future looks bright. His tutor, Samantha Dixon, is preparing to graduate high school at the top of her class. She plans to turn her NASA internship into a career.

When a football accident lands Alex in the hospital, his world is turned upside down. His doctor is murdered. Then, his parents. Death seems to follow him wherever he goes, and now it’s after him.

Alex flees. He tells Samantha not to follow, but she became involved the moment she walked through his door and found Mr. and Mrs. Chin as they lay dying in their home. She cannot abandon the young man she loves. The two race desperately to stay ahead of Alex’s attackers long enough to figure out why they are hunting him in the first place. The answer lies with a secret buried deep in his past, a secret his parents died to protect. Alex always knew he was adopted, but he never knew the real reason his birth parents abandoned him. He never knew where he truly came from. Until now.

Heather and Jon took some time to discuss the book, collaboration and their first foray into science fiction.

FOG!: How would you describe your new book, The Rising?

Jon Land: Ah, such an easy question, right? I wish I had as simple an answer. This book is so many things, it’s difficult to categorize. It features a pair of brave high school seniors, Alex Chin and Samantha Dixon, who find themselves battling a potential alien invasion. This as they learn that Alex himself is an alien who was brought here eighteen years earlier as the only hope the Earth has to survive.

So The Rising is, technically, science fiction. But it’s also an action thriller, a mystery, and a romance. I think the trend in popular fiction today is to avoid labels in favor of genre bending, which suits this book just!

Heather Graham: I think the lines between genres are so blurred these days, The Rising being a prime example of that. If the reader is emotionally vested in the characters, and those characters are in some kind of peril, then by nature that’s a thriller, however else you choose to classify it. I just don’t like splitting hairs between so-called genres, because everybody’s got their own definition of what separates one from another.

What was the genesis of your collaboration?

Heather: I think that Bob Gleason’s (our editor’s) love for NASA was the spark that seemed to set us both on fire. I loved our opportunities to be at the Goddard Space Center. It was amazing. And, like all amazing things, it made our imaginations take flight. Strange, I have five children, grown now, but I so clearly remember going through the high school years with them—and with their five very different personalities. Teenage angst is difficult enough—accepting what has happened in the middle of what should have been a fantastic year for both Alex and Sam was a fascinating concept with which to work!

Jon: That’s absolutely right. A true stroke of fortune was the fact that Tor Books had partnered with NASA on a series of science-themed books aimed at educating kids on what NASA is all about and stimulate their interest in science. Since we’d wanted to work together on something for a while, this seemed like the absolute perfect fit, but it also required that we make our story fit certain parameters that helped define our mission statement and got us off to a real running start.

Both of you have long bibliographies, but for both of you this is your first foray into science fiction and young adult literature.  Were there different muscles that you flexed when writing this book and do you think the collaborative nature make this an easier departure from your more comfortable genres?

Jon: Neither of us had ever focused on young adults and we’d never written science fiction. So I’d say we were delighted by how new and fresh that felt. We were both smart and fortunate enough to work together on an approach and a genre neither of us ever tried before. So I think that alone made the process much more comfortable from the get-go and, yes, made the departure an easy one from what we’re more comfortable with.

Heather: We passed everything back and forth, as opposed to penning individual chapters. And there was a lot verbal back and forth too, discussion as opposed to argument. We were both very open-minded and respected each other’s strengths. Since I’d never collaborated on something this big before, it was a godsend learning how to let go and trust Jon when it sometimes came down to final checks and proofs. He’s actually way better than I am most of the time! Because we are usually working alone, we expect that we’ll always have a last look. Sometimes, it was super nice to think, wow, I don’t have to worry—I know that Jon has that, my back, our backs! And I told him right from the beginning that the scientific stuff and action scenes were all his!

Were there any particular influences when writing The Rising?

Heather: There are often fine lines between horror, thriller, sci-fi, and much more. I spent my life as a huge fan of Richard Matheson and his work covered everything from straight drama to horror to sci-fi—a major example, of that, of course, being I am Legend.  Also, Asimov—I was terrified as a child by the first story of his I read in a Reader’s Digest Treasury for Young Readers book! (laughing)

Really—did mummies come from alien technology? In all of these stories, though, the constant was that men and women were getting through life with very human emotion and behavior. There’s the old saying—no one can change other actions, they can only control their re-actions. That’s the core in our story—and we like to believe that Alex and Sam will be human, but the kind of humans who will rise not just to save themselves, but come to realize that what is happening doesn’t just touch their lives, but the world around them.

Jon: Confession time! I haven’t actually read a lot of science fiction, other than Ray Bradbury and Robert Heinlein. I think the review of The Rising I enjoyed reading the most was from Booklist, which compared it to Stranger in a Strange Land and said something like, at its heart the book is a 1950s retro, sci-fi mash-up. I got a smile on that because I think my primary influences were movies from era I actually grew up with, both of the cheesy and classic variety. Movies like Invasion of the Body Snatchers, Them, The Day the Earth Stood Still, Earth vs. the Flying Saucers. At its heart, I think The Rising is a throwback to that tradition. And I also think the best of those films served as metaphors for something bigger, a message hidden to varying degrees inside the story.

If you were going to a desert island and could bring the complete works of any five authors, who would you bring?

Jon: Gotta go with Stephen King, Robert Ludlum (just the first 10 or so, though!), Lee Child, James Lee Burke and Carl Hiaasen (for laughs!). Then I’d let a coconut hit me in the head, so I’d get amnesia and feel like I was reading them all for the first time.

Heather: Not fair. I need way more! Poe, Dickens – those are givens. Then I couldn’t choose. A favorite work ever is Killer Angels by Shaara. Also, The Devil in the White City. Then there is Lovecraft. Then my friends who write mystery, oh, and sci-fi. And romance. More suspense and thriller . . . .

(laughing) Couldn’t choose. Have to hope I’m never stranded on an island.

Heather: At the end of March, Perfect Obsession, a second book in the Finnegan’s on Broadway series featuring FBI man Craig Frasier and criminal psychologist—and part owner of the family pub!—Kieran Finnegan.

In summer, there will be three more books in the Krewe of Hunter Series, starting with Dying Breath late May and Dark Rites late July. Happy to say that one good thing about being around a while is that there will also be some reprints out there – so, of course, I do advise readers to make sure they don’t buy a book twice. Unless they want to! Then, hey, wow, great, thank you!

Jon: I’ve got yet another departure coming up in August with Dark Light, a kind of hybrid action-thriller horror story that stages the penultimate battle between good and evil.

December brings the return of Texas Ranger Caitlin Strong in Strong To The Bone, and then the sequel to The Rising with Heather, Blood Moon, in January. Yup, I’ve been busy! 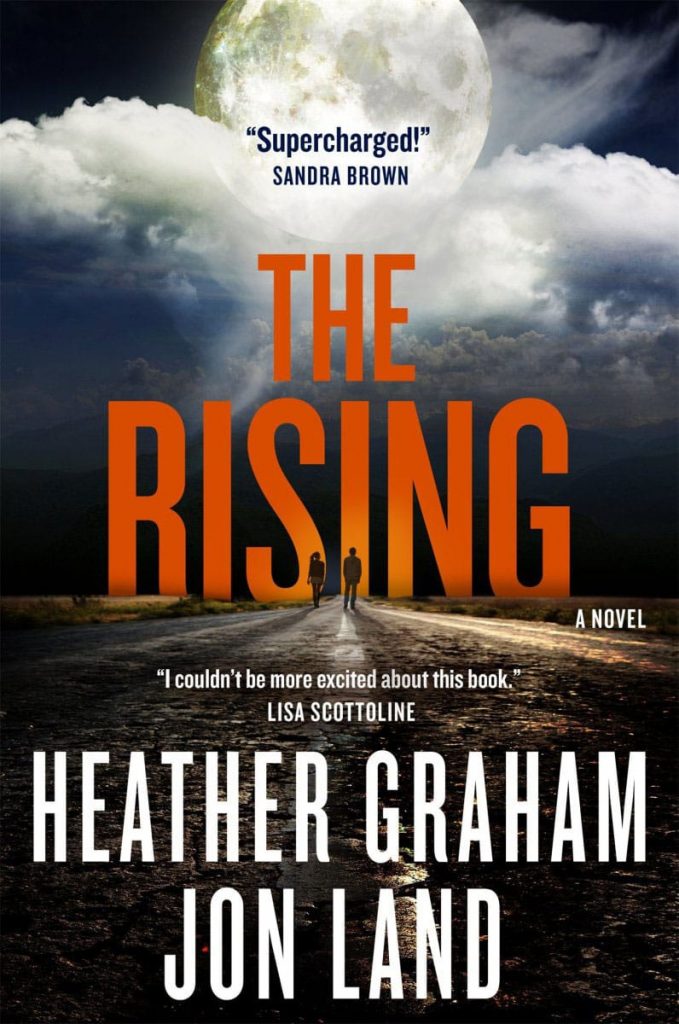 The Rising is now available in print, digital and audio formats.

In this article:Book News, Books/Literature, Interview, Science Fiction, Thriller, YA