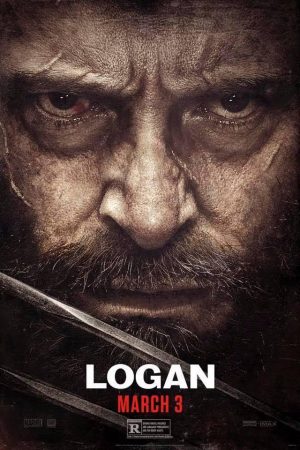 Spoilers ahead!
After seventeen years and nine appearances onscreen as the character, Hugh Jackman ends his run portraying one of comics’ most beloved characters in Logan, directed by James Mangold.

A virtual unknown before being cast as the character (replacing an injured Dougray Scott) in 2000’s X-Men, the role brought Jackman both international fame and a devoted fanbase.  Jackman, in turn, protected the character’s integrity and portrayal, often being the best thing about many of the films he appeared in.

In Logan, Jackman once again delivers an effective and solid performance.  The film is set in 2029 in a world where mutants have become all but extinct.  Logan’s healing factor has become compromised, walking like a retired football player with a limp, covered in scar tissue and needing reading glasses.  Even his adamantium claws don’t work like they used to, occasionally jamming halfway out.  He’s in pain most of the time, medicating himself with alcohol while working as a chauffeur, driving for bachelorette parties and proms.

He’s also the caretaker for Charles Xavier, stricken with a form of dementia that makes not only his memory fleeting, but also making his powers unstable.  Which makes him extremely dangerous.  Logan keeps Xavier hidden, with the mutant Caliban (a nice performance by Stephen Merchant) assisting in making sure that the former Professor takes his medication to keep his wayward powers in check.

And the X-Men?  They’re gone.  Wiped out a short time ago, leaving only Logan and Charles alive.

When Logan is approached by both a nurse on the run and a bionically enhanced security consultant , Donald Pierce, both sharing an interest in a young girl, he finds himself being drawn back into a world of violence that he so desperately wanted to avoid.

The girl, Laura, is an escapee from Transigen, a medical research facility lead by Zander Rice (Richard E. Grant), who is responsible for eradicating genetic mutation only to restart it under laboratory conditions for military applications.

The nurse is murdered by Pierce and his team, The Reavers, sending Logan, Charles and Laura on the road, seeking out the mythical Eden, home of the remaining mutants.

The film is beautifully well shot and feels more grounded in reality than most of the films in the X-Franchise.  Unfortunately, that becomes a hindrance at times, when some of the more fantastic elements appear, breaking the verisimilitude of the film’s reality.

Performances are first rate, in particular newcomer Dafne Keen as Laura and a warm, touching final portrayal of Patrick Stewart as Charles Xavier, who bonds with Laura and whose rapport with Jackman is only amplified by their years onscreen together.

Jackman drives the film, delivering the Logan that fans have wanted to see from the moment he first appeared cage fighting in Canada in the first X-Men film.  The film is ultra violent; we see moments of Logan’s Berserker Rage, where he transforms into a brutal, unrelenting source of destruction.  There’s also plenty of salty language, which is used appropriately for the character rather than as a punchline.

There are several disappointing moments in the film; moments where they zigged instead of zagged.  Personally, they didn’t hurt one’s enjoyment of the film, but it does prevent it from being greater.

At a quiet moment in the film, Charles and Laura watch Shane, and the film shows the duo watching the scene with Alan Ladd saying goodbye to young Brandon De Wilde, “There’s no living with  a killing. There’s no going back from one. Right or wrong, it’s a brand. A brand sticks. There’s no going back.  Now you run on home to your mother, and tell her.  Tell her everything’s all right. And there aren’t any more guns in the valley.”

More than a metaphor, this quote very much describes the plot of Logan, and to make things even more meta, Laura repeats the quote in it’s entirety at the end of the film.