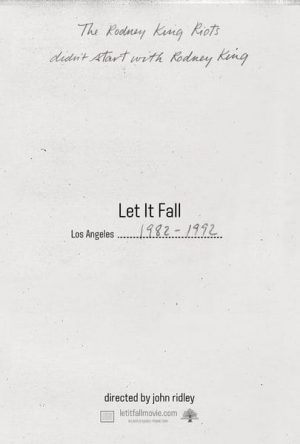 The powerful new documentary by John Ridley (an Oscar winner for his script for 12 Years a Slave and creator of the TV series American Crime), details the events leading up to the LA riots of 1992 and gives us pieces of the story many of us never knew before.

Going back 10 years, it documents the culture of overly aggressive policing instituted by LAPD Chief Daryl Gates and the tensions between the black and Korean communities in South Central LA, which became the epicenter of the riots.

It’s a well-researched and incredibly emotional story that weaves together several points of view from that fateful day — including victims, police, attorneys, and bystanders.

On April 29, 1992, Angelenos were stunned to hear that the four officers on trial for the vicious beating of Rodney King were acquitted. Within minutes of the verdict, LA began to burn: The long-simmering resentment and bitterness at decades of unchecked police violence exploded in violent rioting that went largely unchecked for three days.

Because King died in 2012 and the four officers — Stacey Koon, Laurence Powell, Timothy Wind, and Theodore Briseno — tried for his beating refused to cooperate with the film, they’re represented via existing news footage and interviews.

The toughest part of the whole film is watching those smug bastards defend themselves on camera, and their gloating after their acquittal. And for everyone yelling “I hope you burn in hell,” as they leave the Simi Valley courtroom, there was someone else yelling, “Atta boy, Stacy!”

The film begins in 1982, with the death of James Mincey Jr., just one of the city’s black men who died of a chokehold in police custody. Those chokeholds were later outlawed — and replaced by the use of metal batons to subdue suspects.

The various merits of both uses of force are debated throughout, as is the troubling perception by many police that any suspect who resisted arrest had to be high on PCP, and thus required extraordinary force to subdue.

Robert J. Simpach, an officer who was on the scene for Mincey’s death, shrugs off the incident as “too bad,” but says he felt no guilt, not even when he learned Mincey left behind a pregnant girlfriend (who is also interviewed in the film). It’s no surprise when we learn later on that this same officer was also on the scene for the notorious Rodney King beating. It’s an incident he describes as “100 percent LAPD policy,” despite Gates’s later insistence that the violent beating was an “aberration.”

It’s astonishing not just to hear Simpach defending Gates’s anti-black statements and brutal methods, but that he agreed to cooperate with the film at all. (Gates, who stepped down after the riots, died in 2010).

Another unlikely commentator: One of the jurors who voted to acquit the four officers in one of the most high-profile cases in LA history. He shares that he went in thinking the cops were guilty, only to be convinced during the course of the trial that they were “just doing their job” and that what they did “wasn’t against the law.” The man’s own revelation that he discovered he’s a quarter black — the jury contained no black members — elicits nothing but an eye roll, especially since he offers no apologies or second thoughts  about the verdict.

Terry White, who prosecuted the four cops, provides some of the most interesting commentary. I wouldn’t be surprised if the case isn’t eventually given the “American Crime Story” treatment since it’s every bit as fascinating as the O.J. Simpson trial.

When we meet the commentators in the film, we don’t know where they will end up fitting into the riots: We learn some lost loved ones, some heroically saved victims during the riots and some were out there committing some of the worst violence. It’s an interesting approach that builds sympathy for each person’s story — up to a point — and leaves you wondering what you would have done in the midst of the chaos. Would you risk your own life to save a complete stranger?

Unless you’re well-versed in the riots, you might not recognize the names that are revealed to be members of the infamous LA Four, who brutally attacked truck driver Reginald Denny. They are presented neutrally, without judgment, which might be a sticking point for some viewers. Denny himself does not appear in the film.

While many people seem to think the explosive violence of the 1992 riots came out of nowhere, Ridley carefully demonstrates how and why they happened.

He doesn’t make the point that the same injustices exist today and how it’s likely to happen all over again. He doesn’t need to.