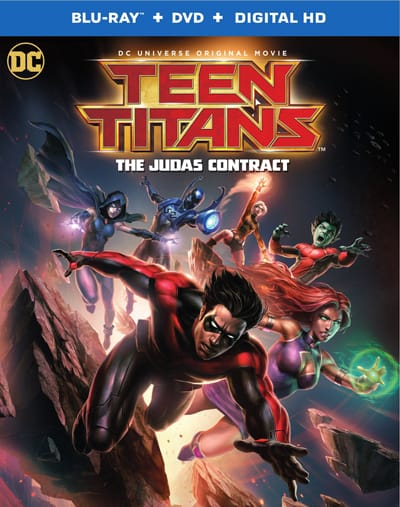 The classic Wolfman/Perez Teen Titans story, The Judas Contract has been updated and fit into the current DCAU by director Sam Liu. While there are some key elements to the story and an overall respect for the source material throughout, this is very much a 2017 DC Comics Animated movie.

The team differs from the original Titans, an additional time frame and a sinister vibe and double-cross from the movie’s villains Brother Blood (Gregg Henry) and Deathstroke (played by the late, great Miguel Ferrer) add another layer to the dense story of betrayal from inside the team. Our animated Titans are led by Starfire (Kari Wahlgren) and the red-Bat New 52 Nightwing (Sean Maher).Beast Boy (Brandon Soo Hoo) returns as a major star in this one as he faces off against his crush and newly initiated team member Terra / Tara Markov (Christina Ricci).

Though credited as creators of the source, Wolfman and Perez aren’t involved with this incarnation of The Judas Contract (though the four issues are available on ComiXology). Ernie Altbacker (Justice League Dark/Static Shock) penned this adaptation which has a lot going for it, not least of all the integration of modern versions of the characters, including everyone’s salty 10 year old, Damian Wayne / Robin (Stuart Allan).

A rogue has infiltrated the Titans in order to collect powers for the advancement of Brother Blood and H.I.V.E. by way of being manipulated by Deathstroke. Deathstroke’s contract with Sebastian Blood is to feed a nefarious machine that can suck the powers from each of our heroes and transfer them to Blood.

This is the 28th in the Animated Movie series, but the 8th in those set in the New 52 Universe. Here’s to hoping they don’t “Rebirth” the heck outta the DCAU, it’s confusing enough. Those that may follow my reviews (and those that don’t – hi!) will see a mostly favorable nod toward animated DC properties of all ages. This is where DC and Warner have Marvel beat in my opinion, and Teen Titans: The Judas Contract is no exception. I really enjoyed this one, if merely for the fact that I wanted to do the research and read the comics after moderating a panel with Marvelous Marv Wolfman last year where he talked of his most precious creation, Raven.

I’m not a big Titans’ fan, more of a Nightwing fan, but as Scooby-gangs go of course I can play along. The New 52 Damian is even more fun to hear sass back and gets humanized a bit  more for me in these movies, making me enjoy this Robin. Might we see a Dick Grayson Batman and Robin DCAU movie? I can only hope.

The worst part of this movie was that Terra seemed a bit young to be moving from stealing a kiss from Beast Boy to wanting to cozy up to a grey bearded Deathstroke. Eww. This definitely wasn’t necessary and was a little gross. And so was Batman and Batgirl getting Batty in the belfry in The Killing Joke. Someone on the creative team needs to cut this stuff out and give these young girls some agency. I’m still scratching my head as to how old Tara was supposed to be in The Judas Contract.

Big points for a Kevin Smith cameo teased early on in the film, and Beast Boy appearing on his podcast. I know it is fan service but it seemed pretty natural and funny.

Big plusses as to what makes the movie work is that the foundation of the story is so strong it would be hard to mess up. Added touches like Blue Beetle’s side story with his family (the scarab dislikes his Dad) were charming and nice. Robin searching for Tara while she sneaks off to meet up with Deathstroke is exactly what he would do. He loves to patrol!

We see the giant T (Titans Tower) as a living character itself, with a ‘Danger Room’ style training gym, and Avengers Mansion type facilities, giving these Titans a place to call home. It’s not that special, I guess, compared to X-Mansions and other superhero hideaways but it is nice to shift attention away from the Batcave occasionally.

Starfire struggles with moving into an apartment with Dick but also with her leadership skills and her relationship with Nightwing. The sexual chemistry between these two is off the charts! Look out, Babs!

No spoilers here, but this is another solid animated movie and makes me grow closer to the Titans as a concept.