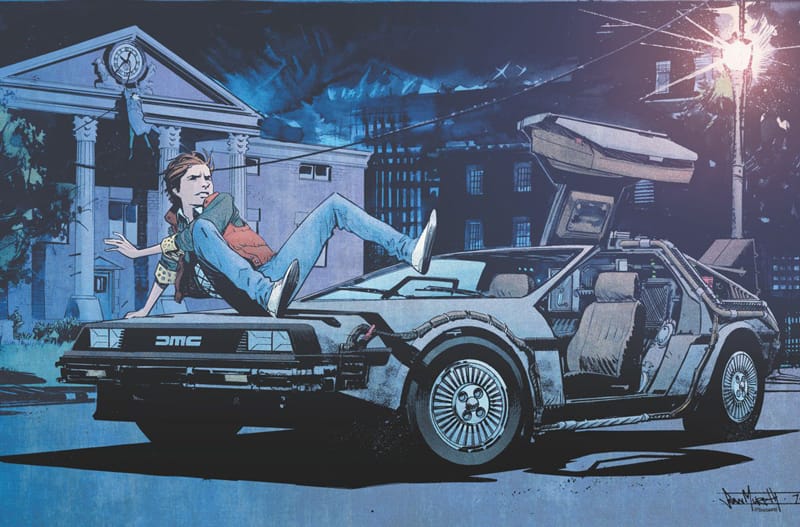 It’s time to go back in time yet again with a trilogy of new, collected Back to the Future comic book stories. (Just don’t confuse it with the Harvey Comics’ books published in the early 1990s. *shudder*)

As BTTF writer Bob Gale explains in the first book’s forward (and then echoes in the subsequent two), “…everything is canon, at least temporarily” and the stories “[riff] on the theme of BTTF, but the original material will always remain as it is.”

In a radioactive nutshell, that means you’ll see a lot of familiar characters doing very familiar things, often relating to key moments in the BTTF movies without permanently changing anything.

The first book (Volume 1: Untold Tales and Alternate Timelines) has a dozen or so stories, each interwoven with the original films and with each other.

The next two books each contain a single, larger story. Continuum Conundrum presents an alternate present – our past, er, Marty’s 1980s present…you get the picture – and a lot of mucking around key movie moments with new complications. In Citizen Brown, things get a bit more weird as Emmett is more a Dic(tator) than the Doc we know. 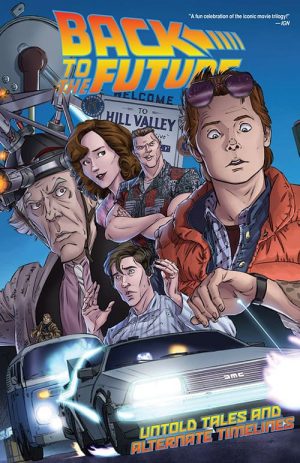 Untold Tales and Alternate Timelines collects the first five issues of the Back to the Future comic series published by IDW in 2015.

Most of the stories in these collected books have Emmett “Doc” Brown working on the time traveling train we saw at the end of the third film.

Between welds he recounts to wife Clara and their two sons (Jules and Verne) adventures of his past, which is pretty much always their future. It’s a tried-and-true plot device that is pretty well played out to the point where the writers even poke a bit of fun at it.

The first story, “When Marty Met Emmett” as the title professes, set in 1982. Needles comes to McFly to take a tube for his guitar.

It falls, breaks and now Marty needs to get a new one or get his ass kicked.  Turns out they’ve all been sold to E.L.B Enterprises, i.e. Emmett “Doc” Brown.

Upon entering his house, Marty trips a Rube Goldberg Machine (or Heath Robinson Contraption, for you Brits) style trap. Doc looks a little older for the wear and Marty younger, but the essence is still there.

That’s followed by “Looking For a Few Good Scientists,” a super short story set in 1943 where Doc is teaching at the California Institute of Technology. He’s recruited by a pair of government agents for a rather (now) well-known secret government project.

Then we jump to 1962 in “The Doc Who Never Was” (after a brief prelude in the wild west, of course), for a story about a future that Doc forgot (how is he telling the story, you might ask? You’ll get there…). Marty’s speaking Russian and everything is completely out of sorts. Not only does Doc find an ad for the car he’ll soon own, but you’ll also see Goldie Wilson starting his political career.

The book continues like that, often jumping back and forth in time to reveal bits between the scenes and help fill in in the plot holes from the films. How is it that Marty worked with doc for years yet he never saw the DeLorean or finished Flux Capacitor? You’ll find out in “Peer Pressure.” How did old Biff bust the DeLorean? Read the oh-so-subtly named “Jurassic Biff.”

One of the more fun stories is “Emmett Brown Visits the Future,” where Doc travels from 1985 to 2015 for the first time. Appropriately, he ends up at a 1980s retro celebration where he quickly wins. His McGuffin here is to get enough money to pay for the hovercraft conversion and a Mr. Fusion. It involves a quick trip back to 1938 to collect a very valuable item…

The biggest departure is “In Search of Calvin Marty Klein” where George McFly, now a bit of an arrogant jerk, is having love troubles with his soon-to-be-wife, Lorraine. It’s a Cyrano de Bergerac style story with a “shocking” twist.

After the stories are about 30 pages of alternate covers and pinup style pages by various artists including Drew Rausch, J. Scott Campbell, Agustin Paoilla, and even Fernandez Ruiz (á la Archie). You also get the see the full, two-page covers by Dan Schoening  expanded (which is especially nice if viewing in a digital format). It feels like a bit much – they could have squeezed in another book – but each page looks great.

The stories swap writers and artists, creating a bit of visual discontinuity that may be intentional but can be a bit jarring when reading all the stories back-to-back. The solid fills, thick lines and sparse backgrounds of the first story (art by Brent Schoonover), for example, are nearly polar opposite to the fine lines, delicate shading and detailed environs of the next Dan Schoening).

Although it’s a bit more schizophrenic than I’d prefer, this is still a fun collection. All the stories are a bit goofy – which pretty much summarizes the entire franchise – but the intertwined aspect is fun. It’s also a quite meta when you get down to it: Comics have been retelling origin stories, redefining characters and re-birthing every title possible to regain readers. In this case, it’s Marty and Doc mucking about in time. They can pretty much do what they want and eyes rightfully roll at the cheesiness of the stories, not the plot device. 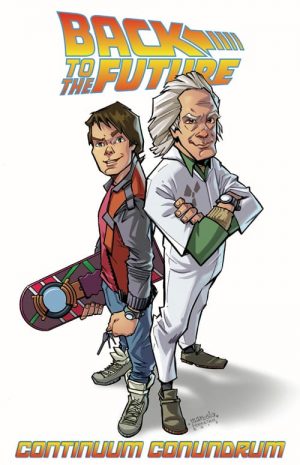 Continuum Concerns is the second book of collected BTTF stories, putting issues six through eleven under the same cover. Here we also see essentially the same art team used throughout (with John Barber as writer), so the style remains a lot more consistent throughout.

The story is what we’ll know as a mixed up version of Marty’s present (in the 1980s, so our past). Doc has amnesia, the cops are chasing them, Clara sent Marty a letter from the way past and Needles doesn’t wanna cause much trouble.

They eventually run into a familiar vehicle – but it’s only familiar if you read the first collection (above) – and Needles finally proves he’s always the prickly jerk. That old radiation suit comes in especially handy as the Doc has a new method for getting up to time traveling speed, this time involving a parachute as well.

They end up in the future where Griff is truly buff and strangely law abiding, er, enforcing, and have a far more exciting confrontation than was ever in the movies. It’s much more cohesive and a faster read even if it has more story pages and less end-of-the-book art. 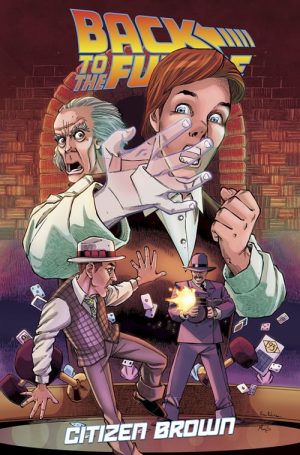 This next book predates the previous two in a rather unusually way: The story is based on the 2010 BTTF video game by Telltale although the books were released in 2016.

This story has a consistent team and is set in the same time as the previous story (1986), although it’s not a crossover.

Marty heads back to 1931 after seeing a newspaper in the library where the death of “Carl Sagan” – actually Doc Brown – is front page news. It’s yet another paradox that our time travelling teammates need to fix. But only after they get Doc outta jail.

Marty literally bumps into a very, very young Emmett Brown here, who has an invention that is vital to his own future-present escape. We also meet accountant Arthur McFly who, naturally, is mixed up with prohibition era mobsters.

There’s quite a bit of quick bopping between future, ’80s present and the past, and evil Edna Strickland and, finally, an alternate reality Emmett Brown.

I’m not as impressed with this story as much as Conundrum, although the dystopian word is an interesting darker look into the franchise.