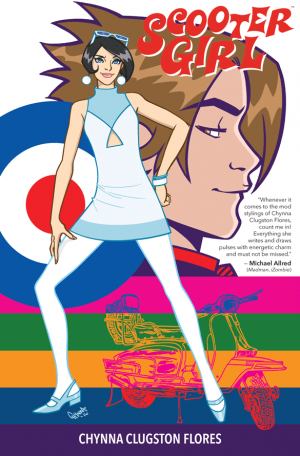 Being only six books in length, you get the entire series in one place.

There’s no elongated monthly blabberty blab trying to eke out a prolonged plotline for the next three-and-a-half years.

What you get here is it.

And it is quite fun.

The book really focuses on arrogant a-hole Ashton “Ash” Archer who, naturally, begins the book getting quick nookie with a girl in the alley. (Oh, yeah, this isn’t exactly a book for younger kids). He has a family tree full of insanely, unnaturally popular, highly opportunistic womanizing males.

Enter Margaret “Mag” Sheldon, the title’s namesake, who instantly crushes Ashton’s mojo causing him to crash, trip and tumble at every turn. By the end of the first book, she’s completely killed his reputation, citing his overt womanizing and the fact that he’s been “insulting [her] gender for as long as [he’s] been able to get a hard-on.”

Flash forward four years, after Ashton moved away to escape this new, negative reputation and resume his former a-holed-ness.

Ashton tries to befriend Mag’s quiet brainy emo brother, Drake, secretly sabotaging her ride(s) every chance possible. After he’s finally caught in the act and heads to grandpa’s where he find out there’s a family curse that involves the Sheldons. The only thing that can cure the curse is an Archer behaving genuinely gentlemanly toward all women. But, instead, he decides to try and kill her, hoping that will finally end the curse.

That results in a dozen-plus pages of attempted murders, each with a comical twist that lands Ash on his ass. He then decides to hire what turns out to be an accidental assassin (not nearly as holistic as Dirk Gently but you get the idea).

Near the end of the book, manga style introspection missives kicks in, offering the prelude to the eventual resolution of the mystical tension between Ash and Mags.

Jamie S. Rich, the original books’ editor, is granted an introduction which is penned with pure sarcasm, calling this an “indulgent side project” that was all his idea. In the midst of his half true, snarky quips, he recognizes this as perhaps Clugston’s best work. And I can see why.

Scooter Girl is packed full of retro groovy goodness. It’s sort of an anti-love story – which, of course, is really just another flavor of a love story – that’s often cute and always fun.

At the time Scooter Girl was published, Clugston was in the midst of her popular teen series, Blue Monday, which made very heavy calls to her love of manga. Here, there is much more restraint, with the Japanese don’t-call-them-comics fandom getting politely sprinkled throughout to make quick points instead of drenching each page.

Note that all the covers here have super retro graphic designs, but don’t expect the inner pages to be that same style. Aside from its dashes of manga it also grabs a few slices of Archie Comics, provides periodic ’80s comic book style environs, shows off with several swirly psychedelic panels and offers healthy doses of mod.

All these mix together into a super groovy artistic story stew, making for a more exciting an interesting read.

By the second book, the art really hits its stride with bolder strokes and more mod style panels to help maintain the mood. It then begins to look much less Archie and more unique.

Also, look for the periodic black-bar notes with the name of a band and a song. It’s the author’s suggested soundtrack for the book which includes songs such as the Dandy Warhol’s “Godless (Massive Attack Remix)” and Shocking Blue’s “Send Me a Postcard.” It’s definitely worth opening a browser and finding the songs to go with the journey.

I may enjoy the overall art and visual energy a bit more than the story itself but, even so, it’s all groovy fun.

So go ahead and give it a ride.