The Summer months are getting closer…that means the Rebirth storyline is heating up! Let’s take a look at some of DC Comics offerings this week. 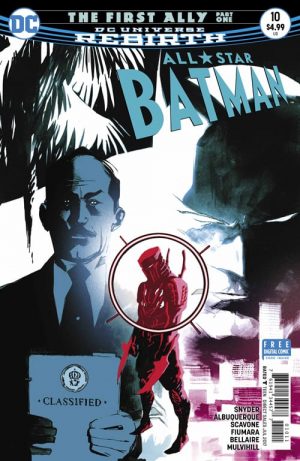 Scott Snyder is a brand of his own these days. With Snyder, you always know going in that he put heart and soul into the writing. That is especially true for this book, which is the first part of a new storyline called “The First Ally.”

Batman’s will is tested to the limits here when he is defeated by a new enemy he cannot beat. Who is this new enemy? How long has he been around? And what is his connection to one of his closest allies? Find out starting here.

The writing is always solid, and the art by Albuquerque is just awesome. Within the first three pages I knew I was going to like this. His panel layouts and figure drawing are something to behold. This is a good creative team. Pick this up for sure. It’s one of the consistently best book currently in the marketplace. 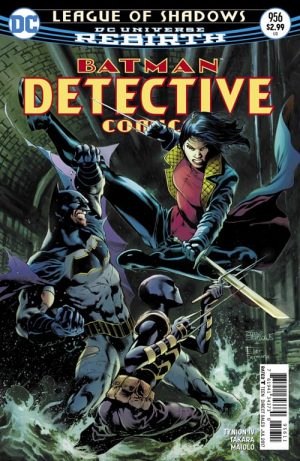 This is a great issue. Why is it so good? Well, it’s the finale of the “League of Shadows” storyline and man is it a doozy.

Action! Intrigue! Great storytelling! All of these things and more can be found within these pages.

It’s all out war in this issue. Batman and his team are up against Lady Shivs and her league of killers. It’s a brutal fight to the finish and it’s enjoyable as hell. I love the all out brawl that happens here. Kudos to Tynion for keeping the excitement and the action high. The last page is something to pay attention to as well.

The art was pretty spiffy too on this. A great storyline from start to finish. This book has gotten really strong and I can’t wait to pick it up every time it comes out. 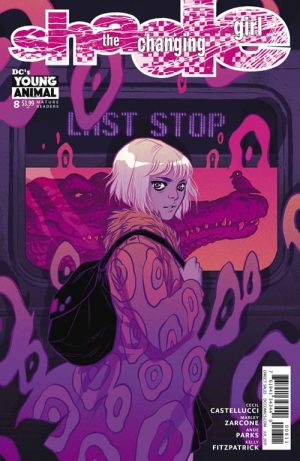 The creative team of Castellucci and Zarcone are reunited in this issue. It’s a new storyline for this title and it starts off strong. I really love how this book is turning out.

Shade decides to go on the road in this issue. Shade realizes she’s not wanted in high school, especially because her friends made it clear that they don’t want her there. So she makes her way to Gotham City…and that’s where the madness begins.

She uses her powers and that alerts the Meta Police to her location…and then craziness ensues. I was hooked on this issue as soon as it started…it’s a hell of a first two pages.

The writing is strong and the art by Zarcone is fantastic. This is perfect creative team for this title. I hope they stick with it for many more issues to come. 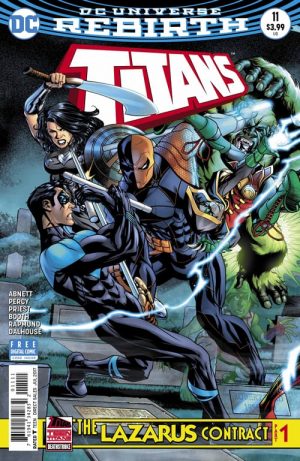 Speaking of great creative teams, here’s another team that does a great job every month. Dan Abnett and Brett Booth are at the top of their game here. This is the start of a new storyline called “The Lazarus Contract” and it’s pretty damn good .

Deathstroke guest stars here. He finds out that Wally West’s return may allow him to bring his son back from the dead. So, he decides to figure out the puzzle. That means action and excitement from cover to cover here!

Deathstroke is as brutal as one would hope here. Abnett has a really good take on the characters.

I’m so happy with Booth’s art. It’s really great. I’m happy to see him drawing Slade Wilson as well. I’m excited about this title. There is some solid work being done here and it’s very cool to read. 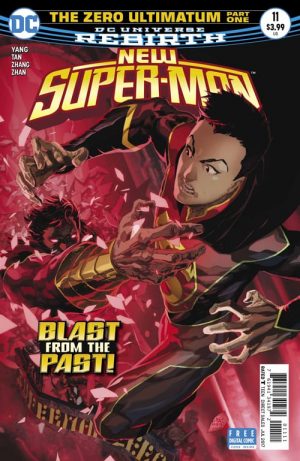 This book has been surprising lately! It’s never really been all that bad. Gene Luen Yang has always been a solid writer after all. Yet, Tan adds an immense amount of energy to the whole affair. His artwork really cooks off the page.

This is the start of a new storyline called “The Zero Ultimatum.”

The original Superman of China happens to get free here. This forces our hero to come into conflict with him! It’s a good time and get damn exciting.

Yang and Tan make for a great team. They are started to cook over here. I thought this book would probably be canceled when it first started. Now, I’m excited to see where it goes. A very good book overall. 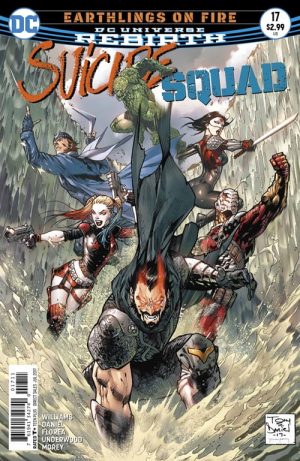 This is the end of the current Suicide Squad storyline and, though it has been better the last few issues, this chapter is pretty underwhelming. I wanted to like it more than I did but it kind of fell flat for me. It’s a shame because I kind of enjoyed the last six or so issues.

Part of the problem here is that Williams’ writing is kind of all over the map here. He does okay with the action. When it comes to the humor however, it doesn’t quite work. He’s a guy who thinks Zod saying “Kneel before Zod!” repeatedly is a scream. It’s not. Trust me it’s not.

Still, the art by Daniel is more than worth the price of admission and the last page was all sorts of awesome. We are definitely in a better place than when this series started. Thank god for that. 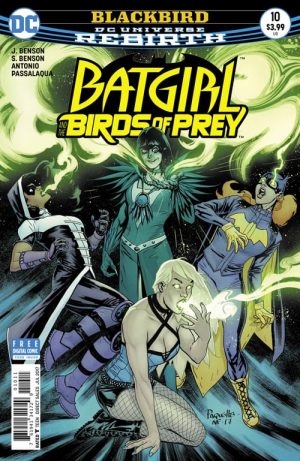 Batgirl and The Birds of Prey #10

Written by Julie and Shawna Benson
Illustrated by Roge Antonio

This is another solid entry in this comic book series. It’s not a spectacular issue, but it is a decent read. I’ve said it before and I’ll say it again: This book feels like the most average book on the stands.

This is the finale of the “Blackbird” storyline. The Birds of Prey find out just what Blackbird is capable of.

The whole comic almost has a vagueness about it. It just feels like an average comic book but it feels like it should be more than that.

A hell of a lot more. The art is decent enough.

I just felt the whole thing was just “okay.” I’d like better than that. 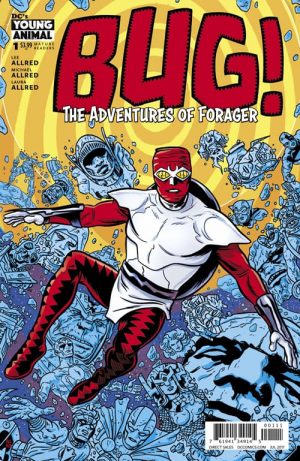 Bug: The Adventures of the Forager #1
Written by Lee Allred
Illustrated by Michael Allred

What the living hell Is this? The Young Animal line over at DC decided to put together a new miniseries. They decided also to entrust it in the hands of the Allred Brothers! It’s an Allred family affair! (Michael’s wife, Laura, does the colors) This is a heck of a happy and joyous comic book.

Our hero, The Forager ,escapes from a place called the Hive. He escapes from his cocoon and goes to a strange house in a strange realm. There he meets a wacky bunch of characters.

He then discovers the existence of a villain called the General Electric. The General Electric is hunting a metal that could destroy reality. So the Forager has to find the Meta first…and possibly become a New God!

Um….it’s great. I loved this nutty tale. I wish Allred would do more Madman. I’ll take this though. It’s the craziest thing I’ve read in a long time. Ginchy! 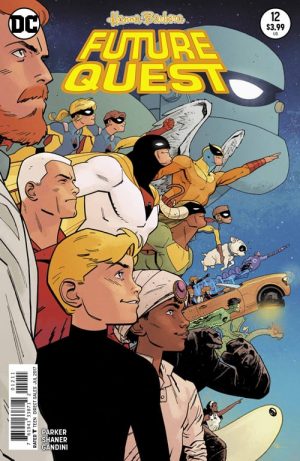 This title is the only good thing to come from the Hanna Barbera line over at DC Comics. I’m sad it’s the final issue for the time being. I know there will be more coming on down the line. It was just nice overall and made me incredibly nostalgic.

The heroes make their final stand against the evil being, the World Ender! Will they survive? Read the issue! (It’s awesome trust me)

Jeff Parker is the real MVP here. He has killed on this title. The writing is sharp and there are some great character moments. Shaner’s art really evokes the a time past. I love every picture in this book.

Pick this up and then pick up the entire series…well worth your time. 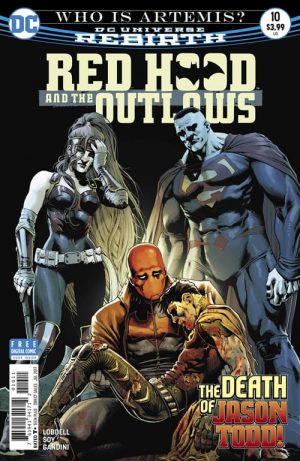 I enjoy Scott Lobdell’s writing. He mixes action with humor perfectly (put him on Suicide Squad maybe?). He paces the story nicely and here it works yet again. This is a good issue.

This is part two of the “Who is Artemis? Storyline and it’s fairly good! Lobdell creates a good mystery here and there are great character moments abound. The part where the Red Hood has to confront his death is nicely handled and emotional.

Dexter Soy is an unsung hero in comics. His artwork is expressive and well composed. I love the way too he draws the Red Hood especially.

Pick this up. It’s another good issue in a solid run.