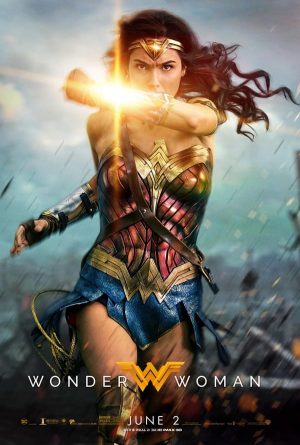 Has it really been a year since DC and Warner Bros treated movie goers to Batman Vs Superman:  Dawn of Justice and Suicide Squad?  I feel like I have been living under the sour stench of those movies for millennia, like some poor man’s Doctor Who storyline.  (I can hear the Doctor now as my crypt is opened: “He saw both of those movies so these creatures that feed off of pleasure could not wipe out the human race.”)

I walked into Wonder Woman feeling this weight and I have to say that I was surprised:  Wonder Woman is a much better movie than either of last year’s DC movies .  I would even go so far as to wager that it is a good movie, not without its Zach Snyder-esque problems, but a good movie nonetheless.

The movie opens in Paris where our hero, played by Gal Gadot, is working at the Louvre.  A package containing the photo from BVS of her with a group of men from 1918 arrives and she begins to study it.  As her voiceover says “I used to want to save the world…the closer you get, the more you see the great darkness simmering within,” we are transported back to the lush isle of Themyscira, her island home.

Diana is a child now, watching her older Amazonian sisters training for combat and visibly wishing she can join in.  General Antiope (Robin Wright of House of Cards and The Princess Bride) is training them and it is apparent that she is young Diana Prince’s hard-scrabble, scarred hero.  She is also Diana’s aunt and knows a secret about her that makes training her of great importance, so she begins and the movie takes us through the years of training.  Wright brings the toughness that she shows in House of Cards to the character to make her scenes rival R Lee Earmey in Full Metal Jacket, if he were as well versed in hand to hand combat as he is in being a drill instructor.

After a confrontation with Antiope that finds Diana searching the island for solace, she finds instead the crashing bi-plane of Steve Trevor (Star Trek’s Chris Pine).  He is followed by several boats of German marines who engage in combat with the Amazons.  Death ensues, with an Amazon victory, but at a great cost.  Closed off from the outside world, Trevor tells them about the Great War to end all wars engulfing the world.  He is a spy who has discovered information that will lead to the end of the war with a victory for free men everywhere.

Diana sees the war as the work of Ares, the Greek God of War, who she is now hellbent to destroy so that she can bring an unprecedented peace to the world.

The rest of the movie finds her traveling to the Western Front in Europe where she leads troops to the German’s, all the while innocently marveling at the atrocities mankind can unleash upon eachother and then simply brush aside.

Gadot’s Wonder Woman for the most part plays like some sort of Valentine Michael Smith from Stranger In A Strange Land .  She tries to understand the world, but she is far too idealistic to simply see all of the wrongdoing and go unaffected.  Her hope and faith in what she needs to accomplish to return mankind to peace and the world to its idyllic beauty are covered both thematically and explicitly throughout.  It is her hope and faith that push her to a new degree of heroism that she never saw in herself, no matter how tough she appeared.

Wonder Woman is a breath of fresh air in the DC Cinematic universe rather than a reboot.   The movie is still saddled with one video game-style epic fight scene that dulls it a bit, but overall there is a good story here.  Director Patty Jenkins (Monster, AMC’s The Killing) brings her ability to tell a dark tale and brings out good performances from some good actors.