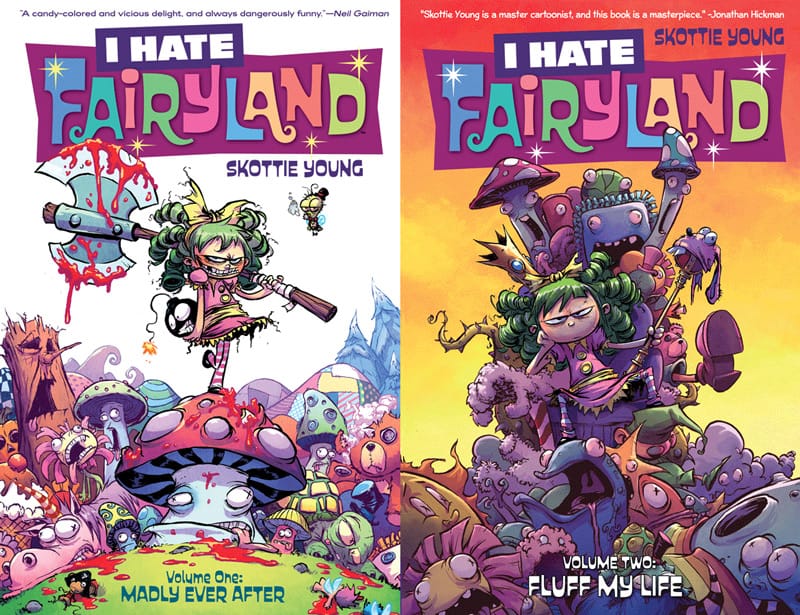 Now imagine your favorite, sweetest, most adorable fairytales with fluffy animals, puffy clouds and happy endings. Put them in a big ol’ blender. Pulse about half a dozen times. Pour that and a generous portion of ink into a roasting pan and bake on scorching hot temps for a day.

These aren’t simply ye olde fractured fairy tales. Oh, no, this is much darker and comical than that.

I Hate Fairyland are books that you should completely judge by the covers. Volume One, for example, features a little girl with missing teeth, coyly holding a bomb, bearing a bloody two-sided axe and offering the most maniacal little kid grin ever. Literally topping it off is a blurb from the dark comic deity, Neil Gaiman: “A candy-colored and vicious delight, and always dangerously funny.”
And, yes, it is.

WHAT THE SPELL IS GOING ON HERE?!

L’il Gertrude is your typical pink dress wearin’ little girl with giant curly – albethey green – locks, enjoying life and wishing to be in her own magical fairytale. Suddenly her deep pink shag carpet opens wide, sucking her into a swirling vortex until she slams down into Fairyland so hard she loses a tooth and a fractured bone is clearly protruding from her arm.

Queen Cloudia gifts Gertrude little Larrigon “Larry” Wentsworth, a semi-helpful cricket who is supposedly going to help her find home. Instead of the quick, pleasant journey through candy forests and frolicking flower, however, flash forward more than 27 years to a bitter, surly, crankipants of what appears to be a little girl gone wrong. It seems she’s not only *not* found the magical key to the door home in less than a day but she’s also become a FLUFF-mouthed bully with murdery, cannibalistic tendencies.

Outside, she’s still kinda cute but, inside…no so much.

Despite the rules of kindness towards visitors, the Queen hires Bruud the Brutal to snuff out Gertrude. As it turns out, Gertrude has become quite formidable, stowing a rather impressive armory within Larry’s pockets. She’s able to dispatch pretty much anyone – or anything – in her way.

Gertrude seems to find a way to hack, slice and thieve her way around the the comically named lands, not only pissing off inhabitants, but demonstrating behaviors rather unbecoming of any child.

Fairyand laws dictate that any visitor to Fairyland cannot be killed and that the queen cannot harm a single hair on their head, so they plan a way to circumvent that law by bringing in a new outsider. Enter Happy, a wide-eyed little girl from, naturally, Joyville, Wisconsin, who happily skips her way through the quests that took Gertrude wa-a-a-a-a-ay longer to (not) complete. Meanwhile, Gertrude takes the low road to find the most evil-y way to compete with Happy’s glittery rainbow ray.

Giving only a wee bit away, the first volume ends with maybe the best, justicy-y plot twist ever to set up the second volume: Gertrude becomes the queen of Fairyland.

Yup, she rules over the very land she’s spent decades trying to escape and obviously despises.

While pondering the various types of queens she can be – and simultaneously trouncing upon many princess tropes – it’s become rather clear that she cannot even succeed at being queen.

Eventually another kid gets sucked into Fairlyand wearing a purple dinosaur costume, which, as we all know, is the costume of doom. Gertrude goes all shades of Mad Max, complete with crazy hair and studded shoulder pads.

The second volume isn’t quite as story filled as the first, but it certainly keeps up the puns and ends with enough of a cliffhanger to make us ache for the next set.

In case it’s not abundantly clear, this is not a series to read to your little loved ones before they drift into Dreamyland. In other words, do not let your children read this. Do not leave it on a chair. In fact, lock it up until they are already eye-twitchingly well within REM and read it under candlelight with naughty, giggling glee.

Sure, at times this seems like it is written for kids (see the four pages of pee jokes) but the violence and gritty imagery would cause kind little kiddos to curl up in to the fetal position and sob alone in the corner, afraid to be touched.

Also, in case I was not being obnoxiously clear, this series is absolutely hilarious. The art constantly pushes the boundaries of adorability simply to highlight how inappropriately and raucously funny it is.

The almost constant layering of pop culture adds another dimension of humor throughout the books.

Early on, for example, there is the Slug “Slug Life” Lord á la Jabba the Hutt who gets taken out “Jabba style.” Dawn (or Shaun) of the Dead gets a sendup as Faun of the Dead and we even get some talking trees á la The Lord of the Rings. There are also homages to Harry Potter, Aliens, Godzilla, Mad Max and video games galore.

The trend to feature a “strong female lead” has been to a whole new, nay, wrong level with I Hate Fairlyand. And it is adorable mockery goodness.

And for my Cincinnati “Porkopolis”, Ohio, friends, yes, pigs in this book do fly. Of course, pretty much everything talks, walks, flies or does all three, but you’ll still get a an extra giggle.

It is friggin’ Fairyland after all.

PS: What the Spell…now FLUFF off.