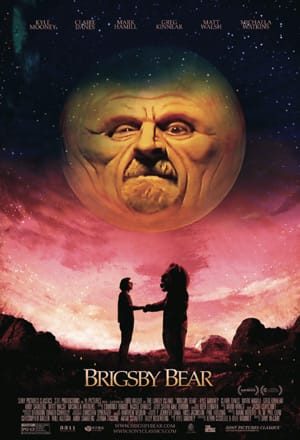 If you need a break from the overwhelming bleakness every time you turn on the news, may I suggest this sweetly magical indie, which appeals to the obsessive nerd in all of us.

Its offbeat mix of pathos and humor might not be your jam, but it made me smile. And maybe tear up a little.

Saturday Night Live‘s Kyle Mooney, who co-wrote the script, stars as James, a grown man who still lives with his parents.

His whole bedroom is decorated with Brigsby merchandise and it’s all he thinks about from the time he gets up to when he goes to bed.

Without getting into the film’s major twist (which is revealed early on), James’s whole world is shaken up and now he has only Brigsby to cling to. But everyone is telling him that if he’s ever going to move on, he’s got to forget about Brigsby! Unthinkable!

Seeing James’s new friends come to share his love for the character and help him make an epic movie continuing the bear’s adventures is awfully heartwarming.

The inexperienced man-child has certainly done to death before, but the essential sweetness of the character gave this film a lot more — dare I say it — heart than your average crass comedy. I’d never seen Mooney before this, and I found James’s eccentricity endearing.

Mark Hamill (who’s not in the film much) does some of his famous character voicework as James’s equally odd father. And Greg Kinnear, as a similarly bearded cop, ends up doing a pretty great Luke Skywalker impression before the film’s end.

If you’re in desperate need of a smile (even a small one) this is the gently funny movie you need in your life right now.