I’m just back from San Diego and a slew of great titles are hitting the stands. Here’s a look at the ones I read this week! 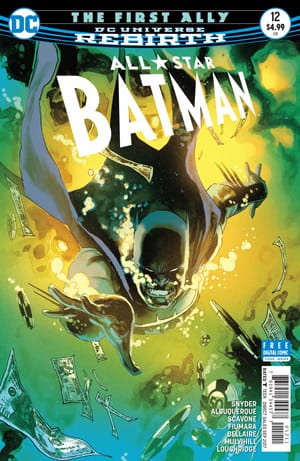 I know people talk about the creative team of Scott Snyder and Greg Capullo a ton.

For my money, the collaboration I love more is the one between Snyder and Albuquerque. They work wonderfully together and have for almost ten years now. Their latest creation in these pages is some of the best work they have done together.

This is part three of the storyline “The First Ally.” In it, Batman battles the villain Nemesis.

It’s a psychological battle that only Snyder could write. Every page, there is some new bit of information learned. We also find out who and what is behind the Nemesis mask. It’s a good revelation too.

The relationship between Batman and Alfred is well handled here. It is also tested very harshly as well.

Snyder makes the whole thing compelling. And the art is some of Albuquerque’s best. Good storytelling and top notch figure work. This book is going away soon but it’s going away on top. 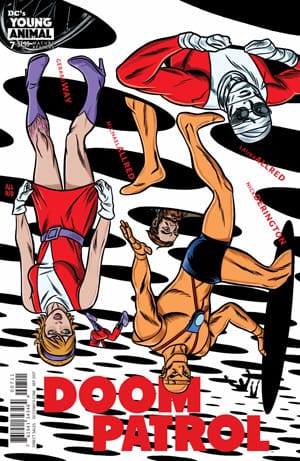 The first six issues of Gerard Way’s Doom Patrol run were some of my favorite comic books published in the last year.

In this issue, Nick Derington takes a break from drawing and instead we are treated to Mike Allred’s artwork.

Way writes a fun issue with this premise with lots of cool twists and turns both humorous and gruesome.

The art is great. If you’re an Allred fan, you’ll love it. I am an Allred fan, so it made me happy. This is a nice break from the previous six issues and a nice jumping on point for new readers. Pick it up now. 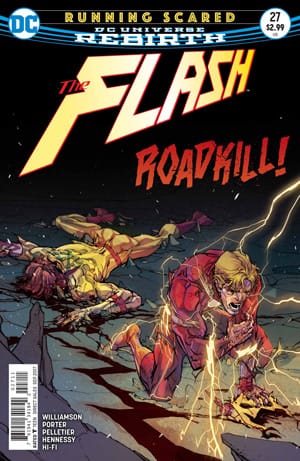 The “Running Scared” storyline has been awesome!

Barry Allen and Iris West go into the future to fight the Reverse Flash. It’s a brutal battle too. Williamson has been weaving a hell of a tale. It all leads up to this issue.

Barry and the Reverse Flash go toe to toe.

Williamson answers these questions in a satisfactory way. The opening scene and how Barry looked gives an instant impact.

The art by Porter and Pelletier does get a bit mixed. That being said, it’s a great issue for a title that turned into a heck of a thrill ride. 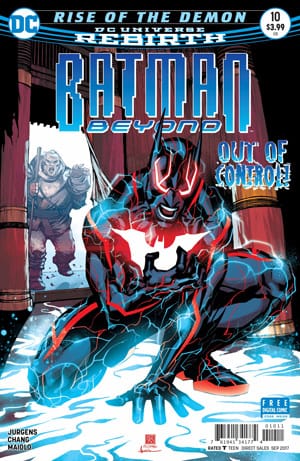 Batman Beyond #10
Written by Dan Jurgens
Illustrated by Bernard Chang

Man, what a cool title this turned out to be. I’ve always liked the Batman Beyond cast of characters, and Jurgens does a great job of keeping the style and the flavor of the original television series intact.

I wasn’t sure what to expect but it’s settled into a nice groove here.

This is part five of the “Rise of the Demon” storyline. The experimental Batsuit Terry is wearing is causing him to go bat…crazy. Bruce Wayne has to deal with Terry being a colder version of the Batman.

Together they have to get out of the den of Ra’s Al Ghul. Will it cost Terry his soul? Find out here.

Jurgens keeps the script lively. The art by Chang is perfect for this title. All in all, this is a good book month to month. Pick it up. I’m liking it very much. 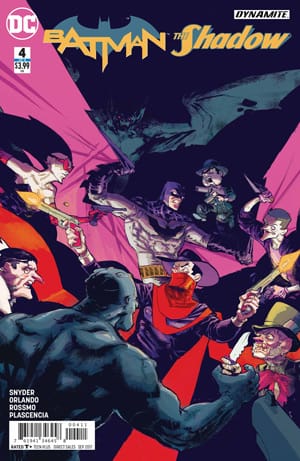 I can’t believe how good this title is.

The genius here is his rendition of The Shadow.

He’s really the first guy since Kaluta to give the Shadow a strong visual identity. Some may argue Chaykin did it. Others may say Matt Wagner even. They are great artists for sure but nothing like Rossmo, who makes The Shadow modern and exciting.

The story by Snyder and Orlando is pretty damn good too. In this issue, the Shadow has to go through Gotham City and fight Batman’s rogues.

He has to do it to stop The Joker and Stag from killing Batman. Can he do it?

Most likely, yes. After all a second Batman/Shadow crossover was announced for this fall. That’s being said, this is awesomely compelling. Snyder and Orlando keep the story cooking.

Their characterizations of both Batman and the Shadow are spectacular. Pick this up. Or pick up the trade when it hits. Well worth your time. 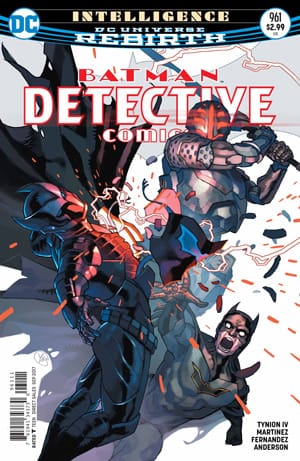 This reinterpretation of Azrael is pretty darn good. Tynion again takes a character I hated and turned him into something I can stomach.

In this issue, Batman and Batwing fight against the villainous Order of St. Dumas and against their champion Ascalon. The fight is intense. Martinez handles the battle scenes extremely well.

The ending of this issue is exciting as well. Tynion seems to be slowly getting better with every issue.

This is probably the best story arc he has done thus far. 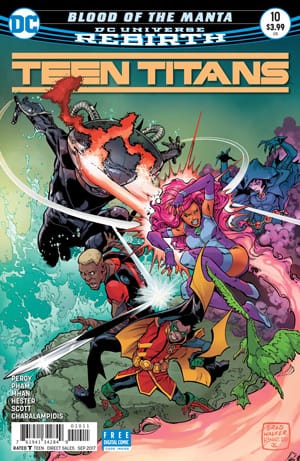 The other Titans book is the stronger one for me. I feel like this title got off to a rocky start and never recovered.

Percy is a pretty decent talent. I just feel he never found his footing. This issue is no different for me.

Jackson Hyde learns in this issue that he the son of the Manta. He joins his father in searching the ocean for a weapon that can change a lot of things. That’s the crux of this issue. Percy’s story doesn’t exactly engage the reader.

Also in this issue, Starfire questions Damian’s leadership abilities. The conflict between the two is great. The problem is that it’s short lived.

That’s a shame. It was the more interesting plot line. The art isn’t bad. For a more enriching experience pick up the other Titans book. This one is pretty standard overall. 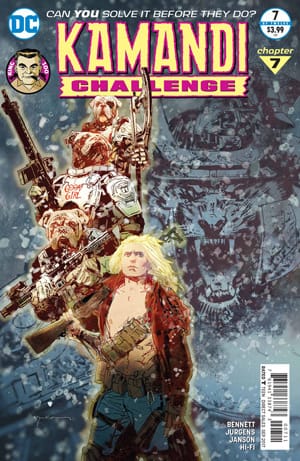 This has been a whirlwind of a title. Every issue has a new creative team and they pick up off the cliffhanger of the previous creative team.

Some teams gel better than others. Bennett and Jurgens are amongst the ones that don’t.

Bennett takes us to a place where creatures named the Polar Parasites exist. They are controlled by these Snow Wizards.

And guess what happened? Kamandi must fight them!

He has a new bunch of pals too…The Bulldog Brittaneks. It’s a cold battle in this issue indeed.

Bennett does a nice writing job with the book. She layers some nice clues about Kamandi’s parents. Jurgen’s art feels like the two of them never discussed the book. It doesn’t jive well.

This could have been a little better. Maybe next issue. 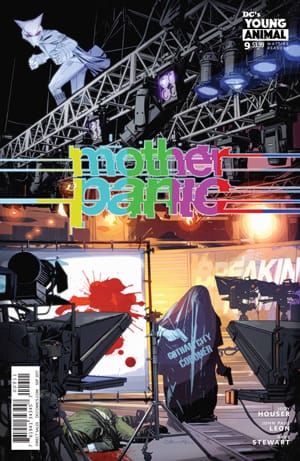 Now for another issue of the weirdest superhero on the planet. Mother Panic! It’s a book written by the always wonderful Jody Houser. This is another instance where the writing and art don’t work as well as I would have hoped.

Mother Panic is in a race against time to defeat the villainy of the nefarious Remains. Will she do it? Or will Dr. Varma’s predictions of what will happen come to pass?

Houser keeps us guessing. It’s pretty strange. I’m just not a Leon fan. His art feels septic and I can never get into it.

Still, the story rocks and I’ll recommend it for that. 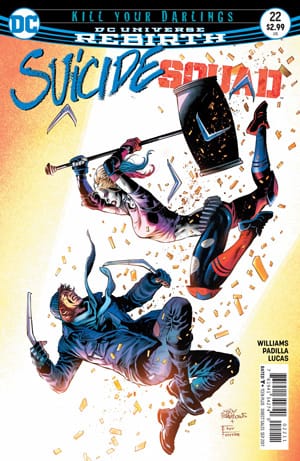 Rob Williams does a wacky job every issue writing this title. It’s a heck of a schizophrenic book though. Sometimes it’s nuts. The next month, it’s extremely nuts.this is one of those issues that’s extremely nuts. I’m okay with that.

The title for this storyline is called “Kill Your Darlings.” In it, Director Karla now commands the Suicide Squad. She has a plan in mind for them. She’s a lunatic who is an evil version of Amanda Waller. Wallet tries to wrest back control of the Squad. It’s awesome.

The art by Vasquez isn’t the best but it’s likable enough. There are some great character moments in the first few pages that make it worth it. Then it gets crazy. Ah well. It gets a B.