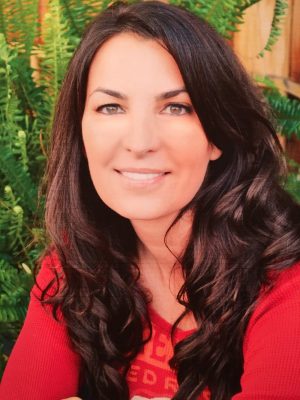 The name Jennifer Spence may not be a household name, but if you are a keen consumer of contemporary horror films and have paid attention to the credits of several of the Insidious and Paranormal Activity films, you may have noticed that Jennifer Spence has been the production designer on these films along with a number of other horror films, including last year’s Lights Out.

With Annabelle: Creation currently in theaters worldwide after having received substantial praise that is rarely given to horror films in the dubious sub-genre of prequel-to-a-prequel-that-was-also-a-spin-off, Spence’s work continues to be seen by an increasing number of moviegoers, but how did she get into the film industry in the first place?

Jennifer Spence: In my early life, I was always a painter and an artist.

I’m originally from Canada, but through a bunch of circumstances I met my American husband. He was in the film industry, so that just opened up my world. We wanted to work together, so I started as a scenic painter because I already had some skills, and I thought that that’s where I could start when I first came to America.

Over the years, Spence essentially did every single thing within the art department, working on both music videos as well as short films. One thing eventually led to another, and Spence was asked if she wanted to be the art director for a project. From then on, her career snowballed towards production design, and she is pleased with the path that led her into her current profession.

It was a crazy road, but it was so valuable for me to be in every part of the art department because I came into production design knowing exactly what it takes to do it and how hard it is. I also have a lot of empathy for all my crew because I’ve been there, so I know what it takes to fill the sets, paint it and all those other crazy things you need to do. It was a good education.

Most of us have influences regardless of what we do in life, and it is often impressive what production designers manage to create from scratch, especially with sets like that of Annabelle: Creation, which looks like a real location rather than the highly detailed set it actually is. But where does Spence get her inspiration?

I don’t think there’s one person I would say that I look to. In general, artists from around the world influence me because when I’m looking for something or trying to create something, I look in so many different places; a fabric could inspire me, or a painting, or even wallpaper. A lot of it comes from within as well because I really didn’t know a lot of people within the industry, so I wasn’t following along a specific path, thinking I would ever become this. It just sort of naturally happened.

The path that would naturally unfold for Spence led her into the expressive world of horror films, where she has worked with James Wan’s team on several features, including 2016’s Lights Out, which was produced by Wan and directed by David F. Sandberg. Spence and Sandberg were reunited for Annabelle: Creation, and their collaboration has yielded an atmospheric and effective result, but how did Spence find the experience of making the film?

When I read the script in early days, I knew exactly what I wanted with the Gothic farmhouse, and David and I have worked together, like you say, on Lights Out, so he pretty much trusted my vision. I did a huge presentation for him, we went over all the details and then we just started from the beginning, from the layout of the house to what the colors were going to look like, and so on. David and I talked about all sorts of things that we might need in the house, and I came up with some ideas for how we could scare people in other ways than what was in the script; the writer was imagining the house as he was writing, so once I got the script, the writer, Gary Dauberman, and I started talking about different rooms. I would suggest that we do the dumbwaiter, put something under the stairs and things like that. The film’s a real team effort; the three of us would develop the story together, and then we’d have meetings with James and the other producers, and it was just such a lovely process. 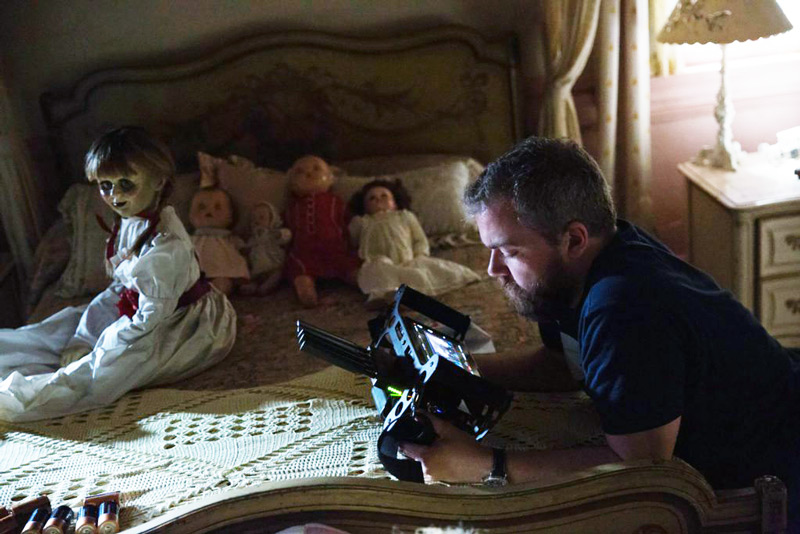 While the average cinemagoer will probably consider the experience of watching the fruits of Spence and co.’s labor horrifying rather than lovely, Spence is definitely pleased with the end result, which she also considers her favorite project so far.

Oh, I love it! I used to come in early and stay late at night because I just loved the house and the way it felt; it felt real, and I really believe that the house was a character. It had a lot of details that I picked because I wanted specific things that conveyed how much the Mullins’ loved their daughter Bee. We had gold bumblebees on the staircase, the stained glass in her bedroom had bumblebees, and there was honeycomb flooring. We also used that imagery for the wall dressings, which included honeycomb-shaped frames, just because we wanted to play on the whole idea of how much the terrible loss of their daughter affected these characters.

And it is with good reason that Spence confidently states that the set of Annabelle: Creation feels like a real house, not only because of the amount of detail that saturates the film, but also because of the sheer volume of the set; featuring two full floors, the set took up a significant amount of space at Warner Bros. Studios in Burbank, California. However, not only those who have settled into their seats in the darkness of the cinema seem to appreciate Spence’s efforts, as the cast was also impressed.

All the girls especially were blown away, and they couldn’t stop saying that they’d forget that they weren’t in a real house because it looked and felt like people had actually lived there. Again, I think that had a lot to do with the detail we put into it. My set decorator, Lisa Son, made or found all these wonderful things to dress the set with, and a lot of the props also really sold it. 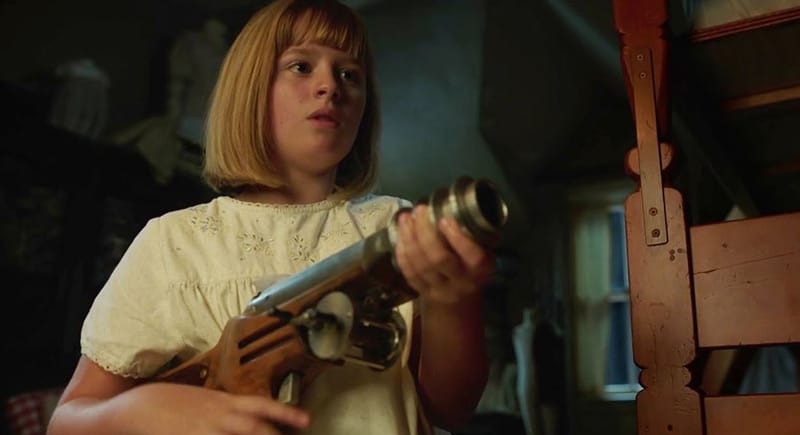 My husband, who’s also my prop master, designed the pop gun, which I loved, and we also stayed up late together one night after work at the stage and we built the puppet house together. He built the wood part and I got all the dressing for it and made the curtains and everything, because that’s what we do; we came together to make films together and we still do, and we’re the kind of people that stay late and do something fun like that to make the set more special.

Many a gorehound will attest to a healthy sense of humor going hand in hand with enjoying a good scare, and horror sets have often been referred to as some of the most fun sets to work on. However, it is not always all scares and giggles, as many urban legends and eerie events have been linked to horror productions over the years; from the many deaths associated with Poltergeist to the myriad of odd coincidences during the filming of The Omen, the anecdotes and tall tales are many, but did anything peculiar happen on the set of Annabelle: Creation?

Late at night, I’d hear different sounds and there’d be nobody on stage, but that was just the house creaking from adjusting itself. But that doll! If I was a kid, I’d put her in my closet; I wouldn’t want her, she just freaks me right out! And with those lifelike eyes! One of my favorite parts in the movie is when one of the girls turns the doll’s head in the closet as if to say ‘stop looking at me’; I totally loved that! 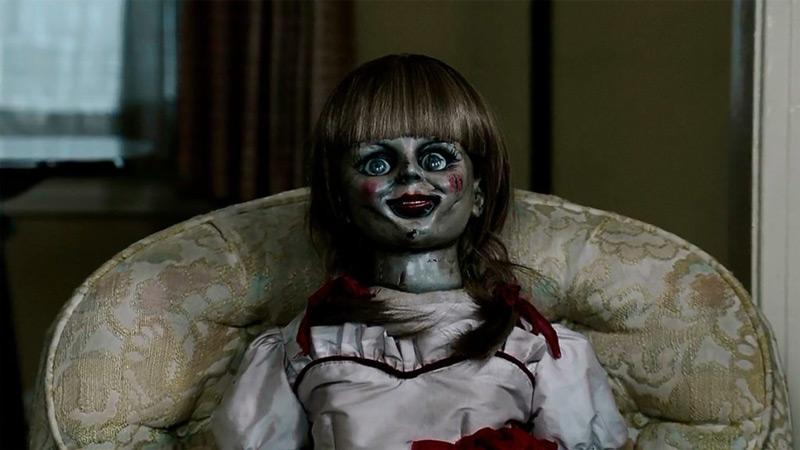 Films concerning creepy old dolls are far from the only thing Spence has been working on recently, though. Much like the Annabelle films are based on a character originally featured in The Conjuring, the horrifying nun from The Conjuring 2 is getting her own feature film as well with next year’s The Nun. Directed by Corin Hardy and starring Bonnie Aarons – who has not only terrified audiences as the demonic nun, but also made a heart-stoppingly frightening appearance as the bum behind the diner in David Lynch’s Mulholland Drive – The Nun recently wrapped and is currently in post-production.

I was in Romania for three and half months where we shot in Transylvania and also on stage at Castel Film Studios. I built a couple of huge sets on stage at the studio, one of which was a big church that I then converted into a tomb room. We went for a classic look for the film, and it was a fantastic experience, but Bonnie Aarons is so scary – oh my god!

Continuing to laugh about just how much Aarons scared her during filming due to how much the makeup transformed the beauty of Aarons’ naturally intense and sculpted face into a vision of terror, Spence also comments on her other upcoming projects. Much like she has worked with James Wan on multiple features and continues to do so with The Nun, her work with David F. Sandberg also looks like it will continue.

I’m hopefully getting the opportunity to do Shazam! with David. I haven’t received the script yet, but I know that it’s coming down the pipe really soon, so we’re probably going to start this month if we get it greenlit. I’ve already done a tremendous amount of research about the comic itself and thought about how to blend it into the production design to bring that world to life, so that’s a project I’m really looking forward to.

But Spence is not only looking forward to branching out into the highly lucrative and ever-expanding superhero genre, she also has a clear vision for the next direction she would like her career to take.

I’d like to work with so many different directors, and not just in horror, but I also have aspirations beyond production design; I want to direct, and my next goal is to direct a horror film. I’ll never stop working in production design because I simply adore it, but I feel like that’s where I want to go with my career. I’d like to do a little bit of everything, and I feel like Hollywood is really starting to change and that gives me hope and encouragement, especially because I’m seeing an increasing number of female filmmakers do well, and I’m so inspired by them. 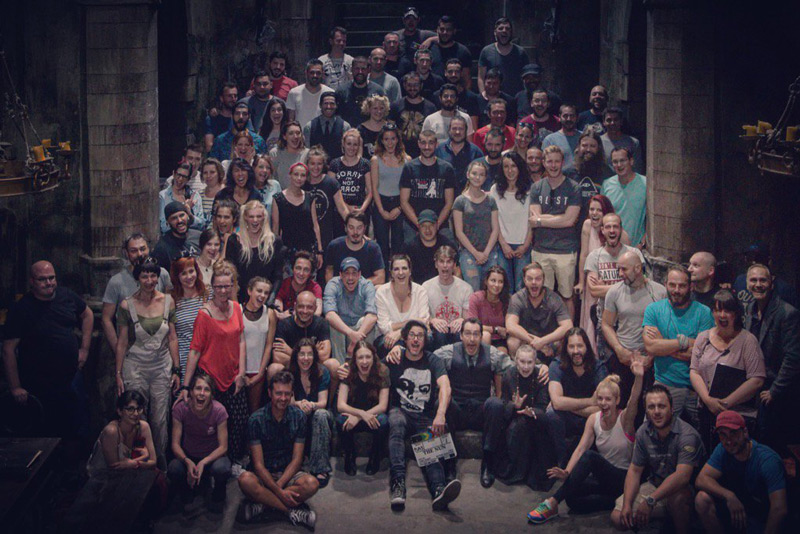