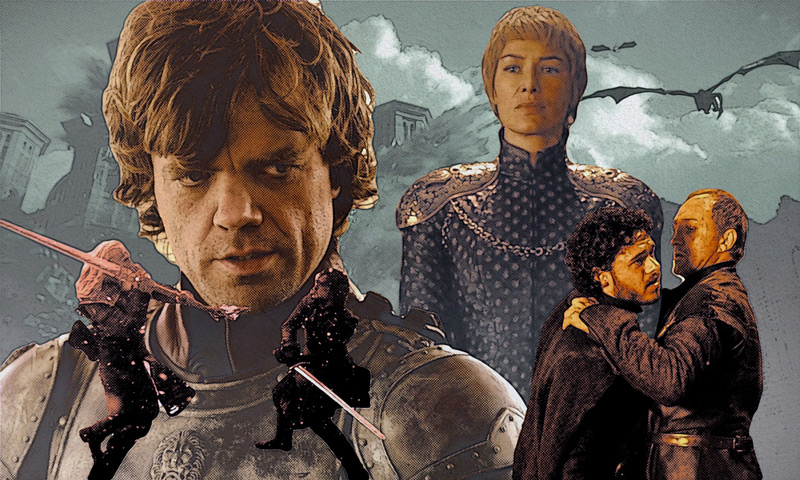 I didn’t get into Game of Thrones right away, in fact, I tried watching the pilot several times and bailed about ten minutes in every single time.

That is until, during the break between the third and fourth seasons, I started dating someone who was really into the show and their enthusiasm for it, along with the fact that everyone I knew seemed to be talking about it, got me to take a second look.

I immediately got into the show with the same enthusiasm and excitement I had seen in everyone else who followed it, I couldn’t wait for the fourth season and week to week for ten straight weeks during that summer of the 2014 I lived for Sunday nights, just so I could stay caught up on Game of Thrones.

I would read reviews the next day to see if I agreed with the critics, or if they agreed with me.

I even toyed with the idea of starting the books written by George R.R. Martin, which for me is a big ask considering I don’t enjoy reading fiction.

I loved the series, and with each passing year and each passing season I felt that I was watching what was increasingly becoming the best show on TV.

All of that seems to be in jeopardy this season, I am noticing a distinct difference between this season and the six previous ones, and I can’t help but think that it’s because we are now in uncharted territories in terms of the world of Game of Thrones. The show’s creators no longer have a roadmap to work from, they’ve used up all their source material. They’ve exhausted the books.

Now, while I’m sure Mr. Martin is still very much involved with the show, I’m sure he guides show creators David Benioff and D.B. Weiss through each season and (perhaps) each episode.  I’m also quite sure he’s holding back a little bit. He still has books to sell, what would be the point of revealing his whole hand with the ending of the series when he is still writing the books?

My point is that I feel there’s something missing from this season and that “something” is the books themselves. Benioff and Weiss are talented writers, there’s no doubt in that, but what the books always gave them was a pace and timing and a sense of purpose that they otherwise might not have had.

This season of Game of Thrones is rushed. Characters are no longer on a journey they simply arrive at a destination. Episode two Jon Snow decides to travel south (a thousand miles) to see The Dragon Queen. Episode three he’s there.

Does this really feel like the Game of Thrones we’ve all come to love? It doesn’t to me.

Had this journey occurred in any other season, and under the guide of the books as source material, Jon’s journey south would have been a two or three episode arc.

So too would Arya’s journey North to be reunited with her sister and see her home for the first time in years.

That was a major moment in the show and, again, it felt rushed.

This of course brings me to the climactic battle from last night, this battle would have happened – in any other season – at episode 9. We would have spent 8 episodes watching a great chess game unfold, watching characters we’ve grown to love, journey through a world we know, watching alliances form and hostilities grow.

By the time The Dothraki charged the Lannister Army on the shores of Casterly Rock we would have spent 8 weeks watching every detail unfold, we would have known every player and all the stakes. The battle would have had more impact because we were more involved.

But, ultimately, the battle would have just made a lot more sense. Here are two of the major logical flaws in last night’s episode:

Where did the Dothraki come from?

If you remember, as I do, the Unsullied were going to attack Casterly Rock. They did, and they won – sort of – only to see the ships that brought them there destroyed. Now, this is the second major Naval defeat the Dragon Queen has suffered at the hands (or ships) of Euron Greyjoy. This defeat, following the one he handed down to Yara, destroys Daenerys’s fleet.

Which brings me to my question; Where did the Dothraki come from?

If Daenerys doesn’t have a navy how does she transport all those warriors from Dragonstone to Kasterlee Rock? It would have made much more sense, and would have been keeping with her character, for her to attack the Lannister army alone, with one Dragon. This would have also raised the emotional stakes, because we would have felt like she was in real danger when her Dragon was shot down. 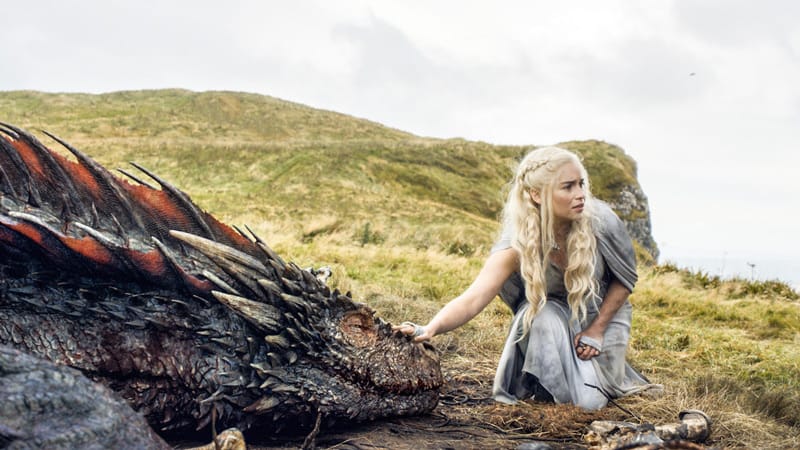 Which brings me to my next point.

Where did that giant crossbow come from?

Look, I know that we saw the giant crossbow, or whatever they’re calling it, early on in Stormborn, but let’s take a big step back and think about this. From the time we saw it, in episode 2 (remember what we saw was essentially a prototype, there was no mention of another existing or many being built, there was one and we saw it), it was packed up – into a special transport built just for it, because that makes no sense, you don’t build a transport for a prototype, you build a second crossbow first, then it was loaded onto a ship and sailed out to Casterly Rock. 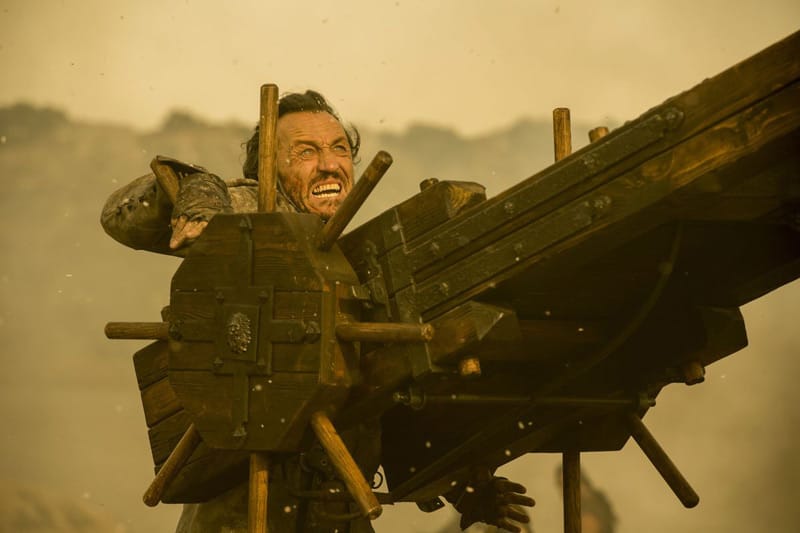 Again, this makes no if you have literally one, ONE, defense against dragons why would you move it from your home base of King’s Landing to be shipped off and used in a secondary battle for control of castle you don’t even care about? Again, Casterly Rock was a set-up, a way for Euron to destroy what was left of Daenerys’s Navy.

So, we must believe that Cersei would allow the only, literally only, defense that she has against freaking dragons to be packed up and shipped to a battle at Casterly Rock, knowing full well that the battle at and for Casterly Rock my just be another in a series of distractions as Daenerys flies a dragon towards King’s Landing.

Furthermore, once it’s unveiled on Casterly Rock, Bronn takes control of the it and he’s quite adept at it, in fact he is so well trained on this prototype of a giant crossbow that he’s able to – by himself – maneuver, load and fire it at a moving target. Twice. Hitting it once.

When did Bronn have time to train on it? If Bronn is that adept at using it, why was he not stationed with it from the get go? Since he wasn’t we have to then assume that he’s not the only one who can efficiently and – one might argue – expertly use this prototype giant crossbow, which means that not only was he trained on it – and trained extensively – but many, many others were as well.

This whole idea is preposterous and again lends to the argument that this is another in a series of chess pieces we would have seen develop over many episodes. When the giant crossbow was introduced I, like many others, brushed it off as a ridiculous defense against a dragon, but I could have been proven wrong over a series of episodes watching men train on it as they got better and more proficient I may have become worried about its use in battle.

These logical lapses, for me, are all emblematic of a much larger problem: Benioff and Weiss are moving through this world without a map or a guide. They’re good writers, but they’re not now, nor have they ever been, the creative force behind Game of Thrones. 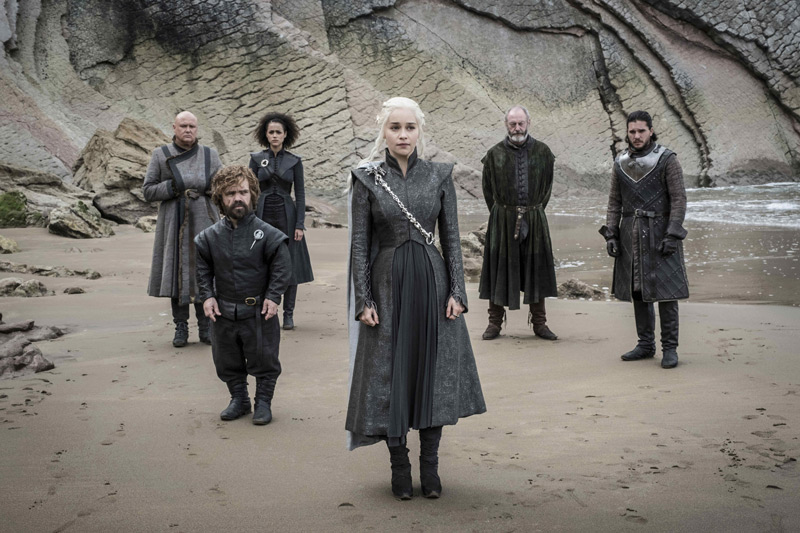 The man with the voice, the man with the plan, is George R. R. Martin, he alone holds the key to the show and the books’ brilliance and he is very clearly absent this season.

Game of Thrones had potential, it was big budget fantasy, it was brutal and it was involving. It was all the violence of The Walking Dead combined with the layered plotting of Breaking Bad. It was about as good as TV gets.

It no longer is, it’s not the show it used to be, watching these last four episodes reminds me of the experience of watching The West Wing after Aaron Sorkin left.

I’m not going to abandon the show, nor do I suggest anyone else does, but I am worried about it, part of the beauty of a great TV show (think The Wire or Mad Men or Breaking Bad) is that it feels like a novel, it’s layered and nuanced in way that a movie could never be and that’s what makes that medium so effective. Which is why Game of Thrones had the potential to be one of the all-time great shows, because the source material it’s pulling from is exactly what all great shows aspire to be, it was a perfect match.

It was. But, without the books – or Mr. Martin – to guide them I don’t think Mr. Benioff or Mr. Weiss have the mind or the talent to pull this off.