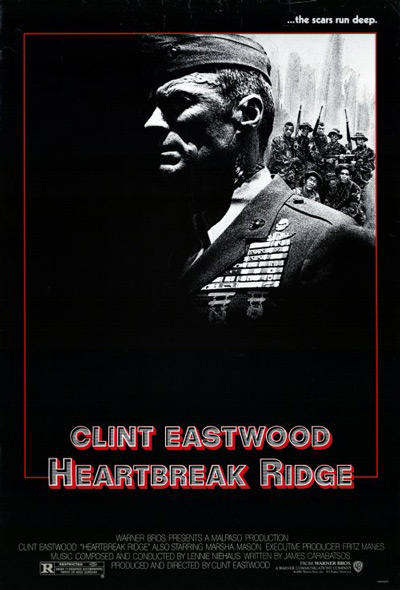 Some movies age poorly and not necessarily because they’re bad. History and hindsight can turn the deepest drama into a comedy and vice/versa. It’s hard to believe today, but Shakespeare’s Merchant of Venice was originally considered a comedy. As time goes on there are moral shifts that make their way into art and literature. And then there are some things that weren’t very funny the first time that are even more cringe worthy now.

1986 was the year Hollywood went to war, sort of. Three very different war films came out that year. Platoon showed us a gritty look at the Vietnam War that was a bona fide critical and commercial success winning many Oscars including Best Picture. Top Gun, went on to be one of the highest grossing films of all time, easily winning the year, while solidifying Tom Cruise as arguably the biggest movie star of his generation.

The third film that year was Clint Eastwood’s Heartbreak Ridge. A film that gave us a homophobic look into scantily clad Marines saving the world during the dark days of Grenada.

Heartbreak Ridge is about a screw up platoon of Marines led by crusty old rampant homophobe Gunnery Sergeant Thomas Highway played by Eastwood who also directs the movie. Highway is a throwback to a generation of soldier, that time, and the military, wants to forget. It is mentioned several times throughout the film that Highway’s way of doing things is over. But beneath the gruff exterior lies a man who cares deeply for his men and still holds a torch for his ex-wife played by Marsha Mason. We realize that despite his tactics he only desires to keep his men alive, and at the ready, should the call ever come, which it does.

As far as movie plots go it’s a simple one: the guy every one thinks is a dinosaur proves them wrong and wins the day. It’s curious that Eastwood was already playing a guy “who was too old for this shit” 30 years ago. He would do it over and over in subsequent decades to great effect in movies like, Unforgiven, and Million Dollar Baby, both of which won the Oscar for Best Picture. Eastwood would go on to coin the quintessential old guy, often hash-tagged, mantra “Get off my lawn” in his film Gran Torino. Eastwood knows his wheelhouse well.

So when Eastwood’s Highway storms onto the scene it’s safe to say his throwback attitude is that of a man with zero political correctness. 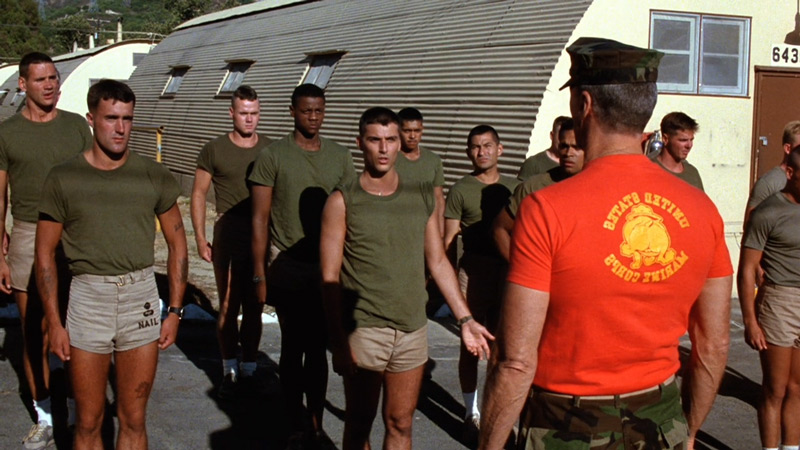 Obviously one could easily say that’s the point of the film, however Eastwood’s Highway seems to go the extra mile when it comes to homophobia. As anyone from a military family will tell you, the word “faggot” was more than a casual term thrown around to during basic training. For Heartbreak Ridge “faggot” is merely foreplay.

The large inmate is played very convincingly by late actor Nicholas Worth, who most Sci-fi fans will remember from Swamp Thing and Darkman. Worth, a power-lifting hulk of a man, had previously starred in a TV movie about male rape a year earlier (as one of the rapists) in the aptly titled, The Rape of Richard Beck. The obvious point of the scene is to show Highway can handle himself in a fight so why did we need the rape joke? Ok, so a prison inmate talks about rape in a prison, no big deal right? Perhaps, except the running theme of gay sex, especially forced, seems to permeate the entire film. Highway uses homophobic slurs at about the same rate Sam Jackson uses motherfu**ers. Highway’s homophobia isn’t just when he’s angry.

Even when Highway does what could only be considered a decent act he often uses the phrase ‘’this doesn’t mean we’ll be taking showers together into the wee hours of the morning.” His character even uses this phrase at the end of the movie when his recruits think he’s died in battle. Highway does this to let the men know he’s okay, he will survive his wounds, and most importantly, he’s not into dudes. Then there’s the personal insults directed at each man in his unit. Vincent Irizarry plays the character of Fragetti, who Highway affectionately calls “FAGetti” because, of course.

Some of the most hurtful homophobia in hindsight was directed at the character of Profile, played by the late actor Tom Villard. Most people might remember Villard from the hit 80’s TV show “We Got It Made.” Villard made a career often portraying bumbling and goofy characters. Villard’s Profile stands out in Heartbreak Ridge. With the exception of Mario Van Peebles character, Stitch, Villard is the recruit with the most lines.

Highway shames Profile directly “Are you some kind of faggot!?!” which is sad, not only for the obvious association with the gay slur meaning weak and disgusting, but because Villard could have answered, “Yes.” 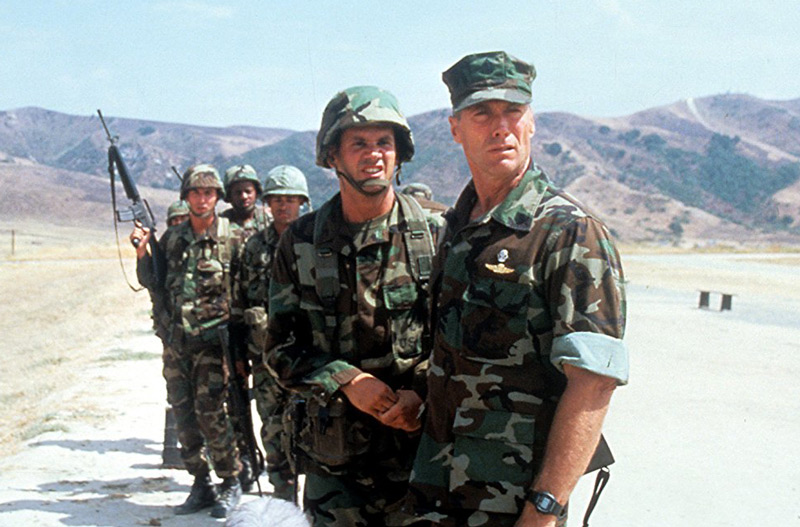 Tom Villard, who would later disclose his sexuality to the industry, would die from AIDS less than eight years later at age 40. Villard recalled after coming out publicly and announcing his diagnosis his auditions began to evaporate. Keeping his sexuality a secret, especially in 1980’s Hollywood while making a movie where being Gay is a punchline, must have been tough.

All of this homophobia leads to the real curiosity of Heartbreak Ridge as it’s without a doubt one of the most unintentionally homoerotic movies ever made.

There are nearly too many examples to list but let me go over a few: the men in Recon platoon are forced by Highway to strip off their shirts several times throughout the film and run glistening with sweat while on long training runs. The men of Recon are nearly always in some form of undress, especially in the barracks as they are always seemingly coming to, or from, a shower. 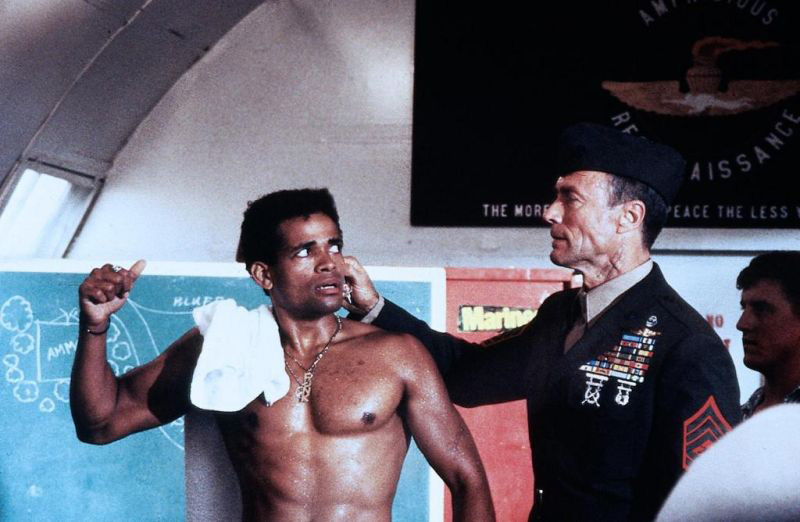 Mario Van Peebles, playing the aforementioned Stitch, when not in a towel, is either wearing a sleeveless torn T-Shirt or only what could be described as Marine issued hot pants. Stitch wears an earring that is torn away by Highway early on in the movie. When the platoon decides to exact revenge they “present” Swede Johanson as their champion. Fresh from the Brig, “The Swede,” played by former football star and human goliath, Peter Koch stands puffed up and ready to deliver a beat down. We are treated to a lingering close up of Koch’s body, also wearing only Marine issue hot pants, before Eastwood forces him to his knees and punches him out. 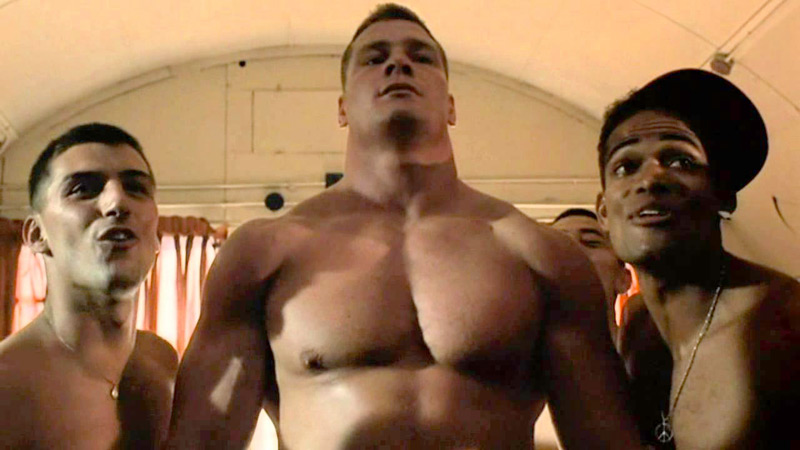 Later, when there is a dispute over which competing platoon won a training exercise, each Marine (you guessed it,) strips down to fight in a mud pit. The conclusion of the all male mud wrestling comes when Van Peebles Stitch (wait for it) grabs the balls of the last two men trying to drag him from the pit. Highway himself is not immune from his own homoerotic behavior as his character reads women’s magazines as a means to better get in touch with his feminine side to woo back his ex wife. That last bit might seem like a clever, even endearing character trait, if it weren’t for the fact Highway is so deeply shamed by it.

One thing Eastwood got right with Heartbreak Ridge that Top Gun surely didn’t, was race. The majority of Marines in Heartbreak Ridge are played by men of color, including one of Highway’s many foils in the movie, Sgt. Webster, played by the legendary actor Moses Gunn. Webster offers to take Highway on, one-on-one, in the mud pit proving the movie doesn’t discriminate when it comes to homoeroticism. Of course that’s before Everett McGill, of Twin Peaks fame, as the cruel Major Powers, holds him off, deciding he wants a piece of Highway all to himself.

If all of this seems like a stretch it’s worthy to note one of the biggest critics of the film at the time was the military itself. The Army withdrew support of the film as it did not like the scripts constant harsh references and treatment of recruits. The lack of support by the Army was somewhat disconcerting as the films title comes from the famous Army battle in 1951 during the Korean War, forcing a line to be added about how Highway left the Army for the Marines years earlier. 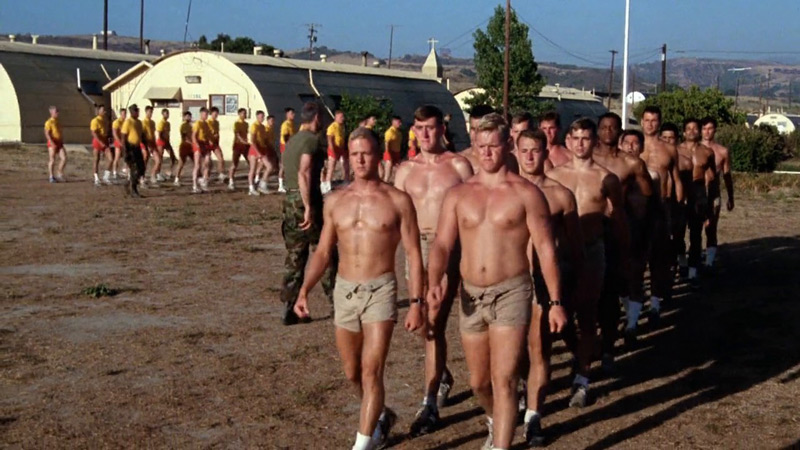 Heartbreak Ridge isn’t a bad film. Besides being one of the only cinematic portrayals of U.S. involvement in Grenada, it’s surprisingly historically accurate. The battle scenes crazier moments, like using a credit card to make a phone call for an air strike, and driving a front loader as cover to advance the pinned down platoon, are actually based on real events in the easily forgotten conflict.

I like Clint Eastwood. He’s always had a healthy sense of humor about himself and plays to his strengths. I think it would be great to see him tackle a Sci-Fi film before he hangs up his spurs. He’s extremely smart about his subject material and is a casting genius.

I don’t think he set out to make a homophobic/homoerotic movie, but he did manage to make a unique military film that aged . . . differently than he might have intended.