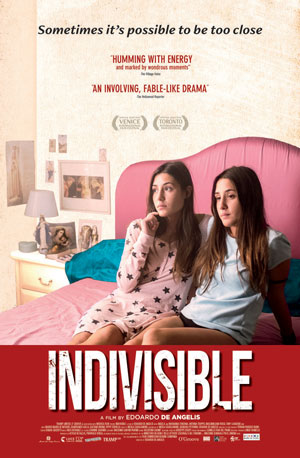 When a movie (especially an Italian movie) features offbeat elements like conjoined twins or a dwarf on a yacht suckling a stripper’s large naked breast, the immediate instinct is to label it “Fellini-esque.”   But when the latest film by director Edoardo De Angelis unveils a Christ statue suspended from a crane above the heads of a small band of religious congregants, the homage to Jesus dangling from a helicopter in La Dolce Vita seems like a clear, winking nod to an honored inspirational predecessor.

Yet despite the lightly surrealistic touches and sumptuous visuals, Indivisible‘s true cinematic links to Fellini are revealed in its distrust of the rich and powerful in general (and the Roman Catholic Church in particular) and its layered, human depictions of innocents and hustlers on the grittier side of the socioeconomic scale — including the aforementioned twins Viola and Dasy (played by real life, non-conjoined sisters Angela and Marianna Fontana).

At first, as the sweet-voiced pop angels perform duets at a confirmation party or sleep together in a single bed, it’s not clear whether the girls are just very close or literally joined at the hip — but the latter turns out to be true, a gimmick their trashy family members (and a shady local priest) are more than happy to exploit to keep smitten, superstitious audiences and parishioners hooked on the luck and blessings supposedly conveyed by touching the dual divas or hearing them sing.

However, with the onset of adulthood, rebellious Dasy is eager for emancipation, both from the manipulations of her parents (played with scuzzy Svegnali brio by Massimiliano Rossi and Antonia Truppo) as well as the inescapable connection to a sister she loves yet defines her existence to the point where she feels “locked in a cage” wherever she goes.

“But we are the cage,” sweet-natured Viola replies, heartbroken and terrified at the prospect of being separated from her lifelong soul mate, “we were born this way.”

Thus, while a doctor eventually confirms their birth “handicap” could be easily corrected (for the daunting sum of 20,000 Euros), it’s the psychological tether between Dasy and Viola, their family, and the status quo of their lives which proves more of an impediment to the sisters’ individual independence than the actual tissue and sinew which binds them together.

Likewise, though the dramatic scenario is unusual, De Angelis’s story (helped along by the luminous charm of the Fontana sisters) is nevertheless entirely relatable on a basic human level.  Moreover, the deceptively simple tall tale structure of the girls’ journey toward lives more ordinary allows for ruminations on deeper themes like humanity’s instinctive resistance to change on all levels in favor of the comfort of our own respective cages.

Indivisible is now playing in New York and Los Angeles