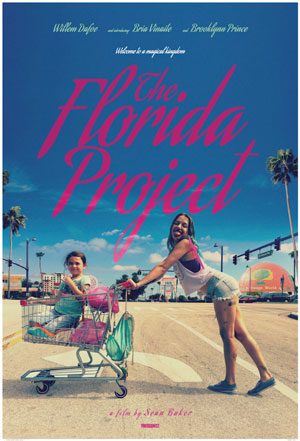 On the outskirts of Orlando, Florida, just past the parks, lies the oddball roadside world of Kissimmee. Even those that don’t lodge at one of its cheaper-than-Disney resort options might encounter the town’s barrage roadside kitsch on the way to meet The Mouse.

The Florida Project, the latest achievement from director/co-writer/producer/editor Sean Baker puts you directly in a lesser-seen side of the town.

Told through the eyes of an outrageously charismatic six-year-old named Moonee (Brooklynn Prince), Baker takes inspiration out of the Depression-era Our Gang shorts from Hal Roach to tell the story of a gang of ragtag kids living week to week at “The Magic Castle” motel. That this Magic Castle is a real place down there, with weekly residents not unlike this film’s characers, only scratches the surface of the movie’s scripted vérité style.

Kool and the Gang’s “Celebration,” leads us into the everyday antics of Moonee and her friends—a song perfectly drenched in the same auto-pilot optimism they posses. The kids, often let loose to wander their universe without adults by their side, speak in sometimes shockingly frank profanity, while getting into varying degrees of trouble on their adventures.

The kids come off, in the film’s early scenes, as extremely obnoxious, with a care-free brazen tone towards newcomers or tourists. With this first glance, it’s easy to pass judgement on not only the foul-mouthed kids, but on their adult guardians as well. Thankfully, this is a film that establishes early on its characters are not here for you to pass judgement on. They’re just trying to get by.

Amidst the colorful 35mm cinematography and production design, lives a huge heart-felt relationship between Moonee and her mother Halley. Bria Vinaite, in a breakout performance that compliments Prince, fearlessly creates a very real, very compelling anti-hero. Baker’s past films have featured similar undaunted leading characters, but Halley is something of a wonder.

By the incredibly heart-breaking ending, our sympathy for Halley is earned despite the unethical decisions we’ve watched her make. I suspect audiences will have a varying range of that sympathetic acceptance, but I know the exact moment I was ready to crown her “mom of the year.”

At the Magic Castle, there’s a surrogate dad in the form of Magic Castle manager Bobby, and he’s played subtly by Wilem Dafoe. He’s both perfectly cast in the role, and yet not the first obvious choice. Again, going against a safer, sappy stereotype, Bobby is a character with most of his dimension off-screen. We get piece of his backstory courtesy of a handful of scenes with Caleb Landry Jones (Get Out), but not too much is explained, all providing a deeper emotional connection for audiences to develop on their own. It’s refreshingly honest storytelling in a refreshingly real movie.

For information and details on how you can make a difference
in the lives of Central Florida homeless, please visit  RethinkHomelessness.org.