It’s a hell of a week over at DC! Let’s get started talking about some books! 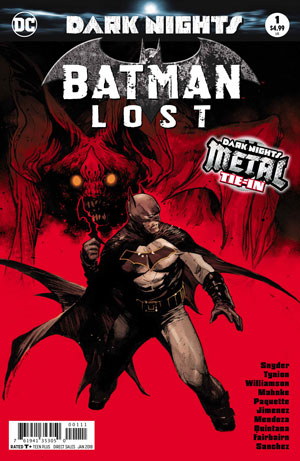 Another Metal Tie-in. This one is written by the man himself: Scott Snyder.

And I loved it.

Metal is literally one of the most Bat Poop crazy storylines that I have ever read and it’s a blast to see Snyder having so much fun.

Batman is trapped in the Dark Multiverse.

This is a hell of place to be. It’s a dark, scary and brutal place. Snyder makes the storyline a nutty adventure. It’s also highly emotional and strangely personal. Batman has to confront his fears here and it’s matter of life and death. Can he make it though? Read this and find out.

Snyder is at the top of his career and this issue shows. The art by Mahnke is awesome as usual. He takes the story and brings it to another level. Pick this up. It’s one of the best of the one shots. 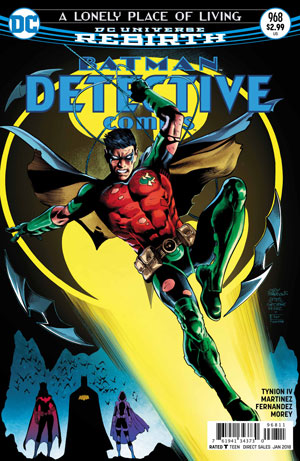 This is the finale of the storyline “A Lonely Place of Dying.” I knew I was going to love this issue right from the cover. It’s a take off of the classic George Perez Batman cover for one of the first Tim Drake storylines (Batman #442) .

The comic inside is just as good as that cover.

Tim Drake is back on Earth! Hooray!

Tim Drake has also brought back something to Earth with him! Boo!

But what is it? And is there another impending attack on Earth that is about to happen?

Tynion is a better writer of Batman’s supporting cast than of Batman himself. So he’s got a good handle on Tim Drake. The art is up to par as well. This was a fascinating issue and it’s leading into something bigger. 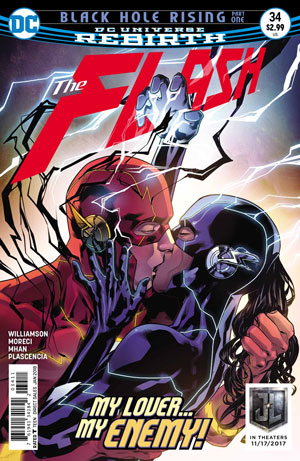 The Flash #34
Written by Joshua Williamson
Illustrated by Pop Mhan

Williamson continues his run on The Flash with a new storyline entitled “Black Hole.”

He seems to know exactly what I love about the Flash. This storyline is off to a fantastic start.

The Flash has powers now that have gone kind of wonky.

In this issue, Williamson delves deeper to what they actually are.

There is also a reunion that is actually a surprise and because of it, both Barry and Wally have to confront their respective pasts. It’s thrilling to watch.

The art is full of fast energy on this issue as well.

Williamson is making this a must read month in and month out. You’re doing yourself a disservice if you aren’t reading it. Pick it up. Now. 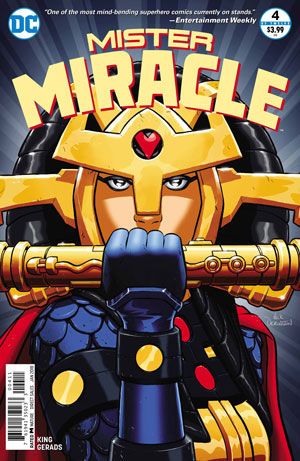 This series is flying along! Tom King has such a great take on Mister Miracle that it’s my favorite of all time. Nobody has written him better. The same holds for the art by Gerads.

This is the trial of Mister Miracle!

Orion and Lightray are completely convinced that Scott Free has become infected by the Anti-Life Equation. They believe that he wants to take down New Genesis.

Scott then has to be subjected to an intense interrogation from the duo. King makes these scenes thrilling.

This issue ends wonderfully. I am salivating for the next issue. 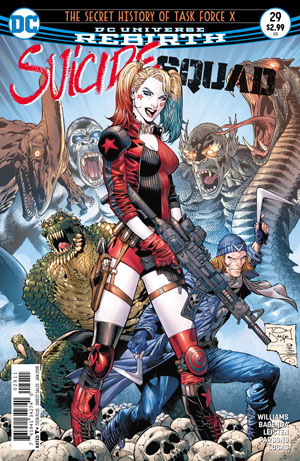 This is the third part of the storyline “The Secret History of Task Force X.” And It’s pretty bananas as usual.

There is no art by Stjepan Sejic so I found it rather dull. Carlini isn’t bad, I just love Sejic’s work. I lost interest a bit when I found out.

This issue shows what happened to the Task Force X from the 1950s.

Amanda Waller finds out the truth. So, now it’s up to the modern day Suicide to fight and not suffer the same fate as their predecessors!

Can they survive? Will they win? Is Harley Quinn over exposed? Find out here!
The story by Williams is wacky as usual. I think at this point he should retire from this title. The art again is dull.

I think a new direction is in order.

Or a new Rebirth. 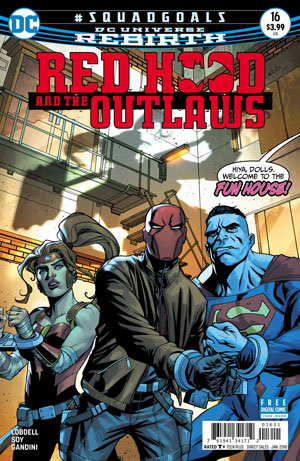 The writer of the film Happy Death Day, Mr. Scott Lobdell continues his run on this title.

It’s a another fine issue filled with action, pathos and humor. Lobdell has been a good writer for years. It’s good to see him finally getting some recognition.

This is part three of the “Bizarro Reborn” storyline and it’s a good one.

The Outlaws have wound up in prison! They seem to be locked in there with the Suicide Squad. So what is going to happen? Well, it seems like a fight is about to happen!

The writing is a ton of fun.

Dexter Soy remains one of comic books best kept secrets. Pick this up.

Read it from the beginning. It’s certainly worth it. 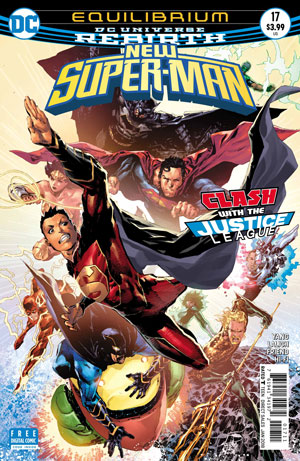 This book has been consistently interesting by the one and only Gene Luen Yang.

Yang is an interesting writer and has kept the story fairly fun and at a high level. I look forward to reading it each month.

Apparently, all of the heroes do too.

The story is fun. The characters are well developed. The art is the weak point here. I wish it was stronger. It brings down an otherwise compelling storyline. 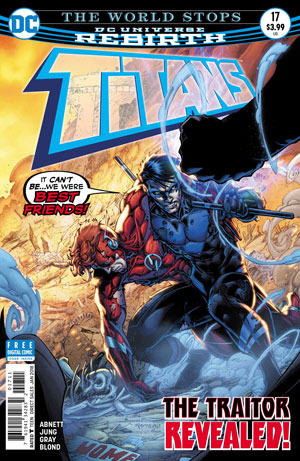 The Titans have had a traitor in their midst these last few issues.

Abnett has written a thrilling story here and the plot twist have been quite terrific. I’ve been reading with glee.

This is the issue where that very traitor has been revealed. It was a good lead up and the payoff is worth it. I’m excited and have been excited about the direction of this book.

Friend is turning against friend in this issue and nothing may ever be the same again!

The art by Jung fits this story like a glove. I had never heard of Jung before but I liked the work.

It’s been a very good book that’s been firing on all cylinders since Rebirth‘s inception. Pick it up for sure. 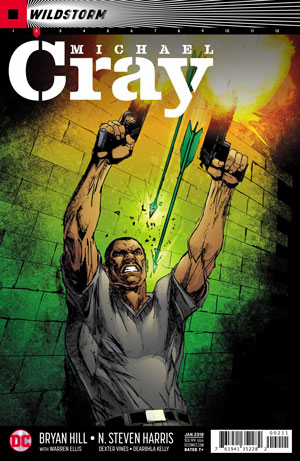 This has been an okay spinoff from the main Wildstorm book thus far. A lot of people I know really dig it.

For me it hasn’t quite taken off yet. It may for me in coming issues and until then I’m waiting for it to come alive.

This is the best part of this book for sure. Cray jumps onto Queen’s crazy nutty island ready to play the game on it. Can he survive? And can he get close to Queen?

The writing isn’t as exciting as one would hope. The art is decent enough.

I feel like there is a lot of potential in this but it hasn’t reached it yet. I’m hoping it will. 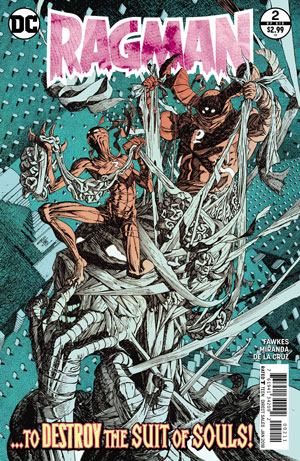 This limited series got off to an interesting start due to the deft writing by Fawkes.

Ragman has never been a favorite of mine to be honest but here Fawkes makes the character interesting and relatable in a way he has never been before.

Demons are attacking Rory’s father to try to get his suit of souls. Rory isn’t having it. So he decides it is time to fight these demons head on!

Since he isn’t that experienced, he has to fight his own demons first. It’s a harrowing experience.

The art is very good for this title. Honestly, I wasn’t expecting to like it. Fawkes and Miranda proved me wrong.

Pick this up. I found it so very interesting and incredibly enjoyable. 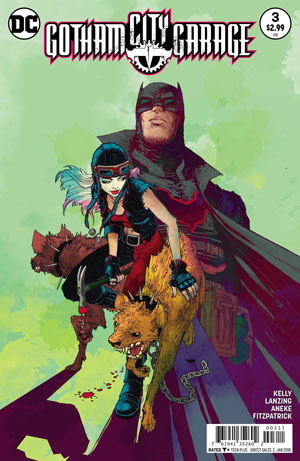 I’ve been enjoying the hell out of this series. It’s a very different take on Batman but it works so well.

It’s like an old Elseworlds tale mixed with a futuristic dark manga.

Needless to say, I cannot get enough of it.

Dr. Harleen Quinzel is a the creator of Governor Lex Luthor’s project about mind control. She has come to watch the city and those she’s affected burn. The Bat and Batgirl are mad at what she has done. It’s time for their revenge.

This is a great spin on the mythos. The story is inspired. The art is terrific as well. Pick it up. It’s full of life, pep, and a hell of a lot of excitement.