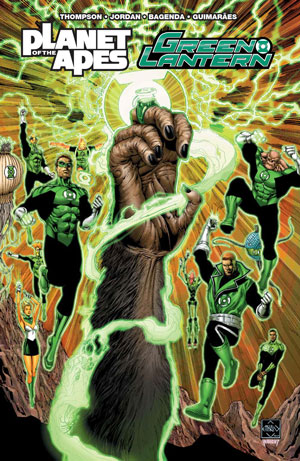 Planet of the Apes/Green Lantern. Yes, it’s an odd combination but it sorta kinda works. It’s a also a bit odd when the reader attempts to figure out exactly WHEN the story is taking place.

Of course, with time travel, all things are possible.

And to then tie-in the Green Lantern Corps from, more or less, our Earth’s present?

Well, that just confuses the issue even more.

But there they are, in spite of the series’ singular title, we get the Red Lanterns, Yellow Lanterns, Blue Lanterns, and Green Lanterns of recent years and, in fact, much of the time, Hal Jordan is out of uniform all together, being mistaken for Charlton Heston or James Franciscus.

The McGuffin of the plot is this all powerful “one ring” that’s been hidden somewhere on the alternate future earth inhabited by Dr. Zaius, Zira, and Cornelius. Sinestro, the eternal thorn in the side of the Corps, is after it but Cornelius finds it first.

Over the course of six issues, we meet the nuke-worshipping mutants introduced in Beneath and there are nice nods to continuity with minor film characters such as the young Lucius (from Planet) and Dr. Milo (from the third film, Escape From the Planet of the Apes) making appearances. From the comics side, there’s an obvious tie-in with classic Flash villain, Gorilla Grodd!

The story is credited to one Robbie Thompson (no relation) while a gentleman named John Jordan is the actual writer. It all feels a little long and padded to sustain the six issues. Four might have been better. The art, by yet another stranger to me, Barnaby Bagenda, is exciting and colorful (thanks to one Alex Guimaraes) although the PDF copies I saw seemed a bit out of focus throughout. If intentional, for whatever reason, it didn’t work. If accidental, it doesn’t help.

As in the original series, it’s Dr. Zaius who comes across as the most interesting character. One can almost hear Maurice Evans’ pompous, haughty voice echo from the panels. The effect would have been even more interesting except that for some reason, the artist has chosen to make the apes look very little like they looked in the original movie series but rather a bit more like the look of the more recent films.

I have to wonder, too, why it was decided to end what was billed as a six-issue mini-series on a cliffhanger—and a confusing one at that. So, I’m torn here but in spite of my relatively slight issues with it, reading the series overall was a lot of fun and easy enough to follow even if one hasn’t been a devotee of the rainbow Lantern concepts.

So, with those few caveats…Booksteve Recommends!