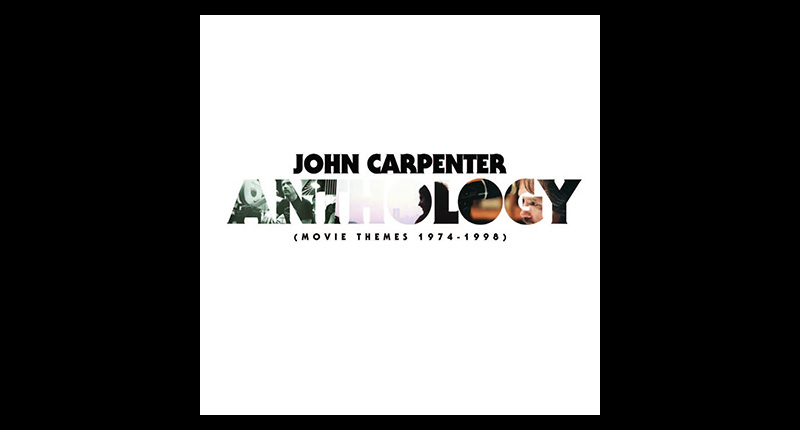 John Carpenter is a legend. As the director and composer behind dozens of classic movies, Carpenter has established a reputation as one of the greatest filmmakers in the history of modern cinema, as well as one of its most influential musicians. The minimal, synthesizer-driven themes to films like Halloween, Escape From New York, and Assault on Precinct 13 are as indelible as their images, and their timelessness was evident as Carpenter performed them live in a string of internationally sold-out concert dates in 2016. Anthology: Movie Themes 1974-1998 collects 13 classic themes from Carpenter’s illustrious career together on one volume for the first time. Each theme has been newly recorded with the same collaborators that Carpenter worked with on his hit Lost Themes studio albums: his son, Cody Carpenter, and godson, Daniel Davies.

The ultimate tribute to one of the most prolific musical careers of the last four decades, Squeeze Box features all 14 of Weird Al s studio albums remastered on CD, 150-gram vinyl and digital, spanning from his debut album “Weird Al” Yankovic (1983) to Mandatory Fun (2014). Mandatory Fun was not only the first comedy album in history to debut at #1 on the Billboard chart, but also the first to even reach that lofty position in over 50 years. Altogether, the albums included in Squeeze Box have earned multiple Grammy awards, as well as dozens of gold and platinum records in the U.S., Canada and Australia.

Six of these albums will make their debut on vinyl as part of Squeeze Box. Each has been newly remastered by Grammy Award-winning engineer Mark Wilder and personally approved by Yankovic. An Al-curated 15th bonus disc, Medium Rarities, features specially selected non-album tracks from across his remarkable career.

Squeeze Box comes in a unique package worthy of Weird Al’s inimitable style: an amazing replica of his signature accordion, with each album stored in its bellows. An accompanying 100-page book will feature a trove of rare and unseen photos and memorabilia. 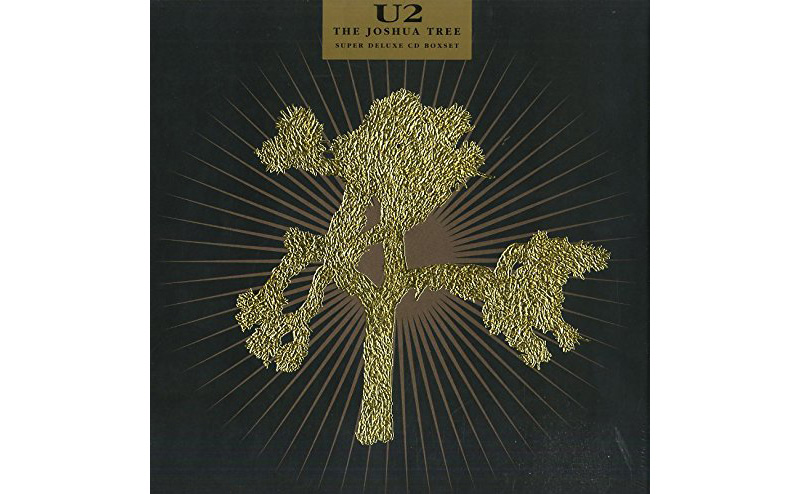 To mark 30 years since the release of U2’s fifth studio album The Joshua Tree comes this Super Deluxe anniversary edition.

Alongside the 11-track album, the super deluxe collector’s edition includes a live recording of The Joshua Tree Tour 1987 Madison Square Garden concert; rarities and B-sides from the album’s original recording sessions; as well as 2017 remixes from Daniel Lanois, St Francis Hotel, Jacknife Lee, Steve Lillywhite and Flood; plus an 84-page hardback book of unseen personal photography shot by The Edge during the original Mojave Desert photo session in 1986.

Released to universal acclaim on March 9th, 1987 and featuring hit singles ‘With Or Without You’, ‘I Still Haven’t Found What I’m Looking For’ and ‘Where The Streets Have No Name’, The Joshua Tree went to #1 in the U.K, U.S., Ireland and around the world, selling in excess of 25 million albums, and catapulting Bono, The Edge, Adam Clayton and Larry Mullen Jr ‘…from heroes to superstars’ (Rolling Stone). Time Magazine put U2 on its cover in April 1987, proclaiming them ‘Rock’s Hottest Ticket’ and the 12 months that followed saw U2 create iconic moments including the traffic-stopping Grammy Award-winning ‘Where The Streets Have No Name’ video on the roof of a Los Angeles liquor store, and go on to win a BRIT Award and two Grammys – including Album of the Year – their first of 22 received to date; as well as a triumphant return home for four unforgettable shows in Belfast, Dublin and Cork in the summer of 1987. 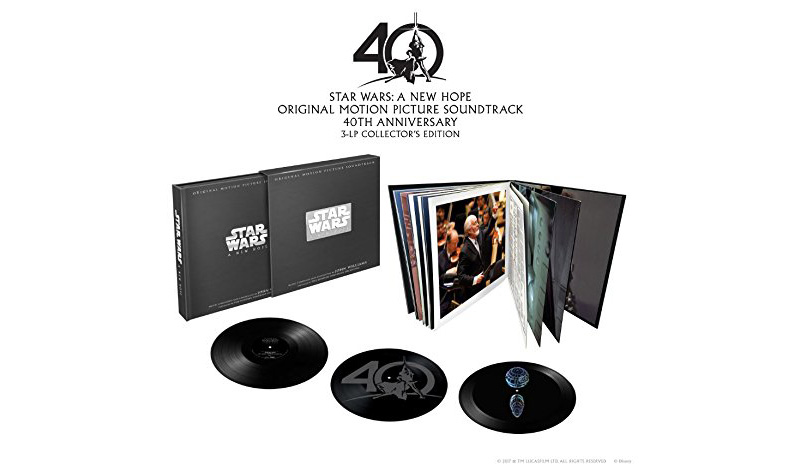 Celebrating the 40th Anniversary of one of the most significant soundtracks in film history, Walt Disney Records is set to release a new hologram vinyl version of the remastered original motion picture soundtrack for Lucasfilm’s Star Wars: A New Hope. With score conducted and composed by five-time Academy Award-winning composer John Williams, the 3-LP set features a 48-page hard cover book on 180-gram vinyl. This one-of-a-kind vinyl set, hand etched by Tristan Duke (Jack White’s Lazaretto) of Infinity Light Science, offers a 3D hologram experience featuring the Death Star on Disc 1. For optimal viewing, use a direct light source or simply hold a mobile phone flashlight above the vinyl to view the hologram. Disc 2 features the Star Wars 40th Anniversary logo etched into the vinyl. The box set includes rare and never-before-seen photos of the film s production and scoring sessions. Additionally, two essays are featured in the hardcover book. Tuning Up a Galaxy written by author Jeff Bond (Danse Macabre: 25 years of Danny Elfman and Tim Burton, The Music of Star Trek) focuses on the phenomenon of Star Wars and how John Williams score changed film music forever. John Williams Journey to Star Wars by Jeff Eldridge discusses John Williams early career from his musical heritage to his continuing legacy. 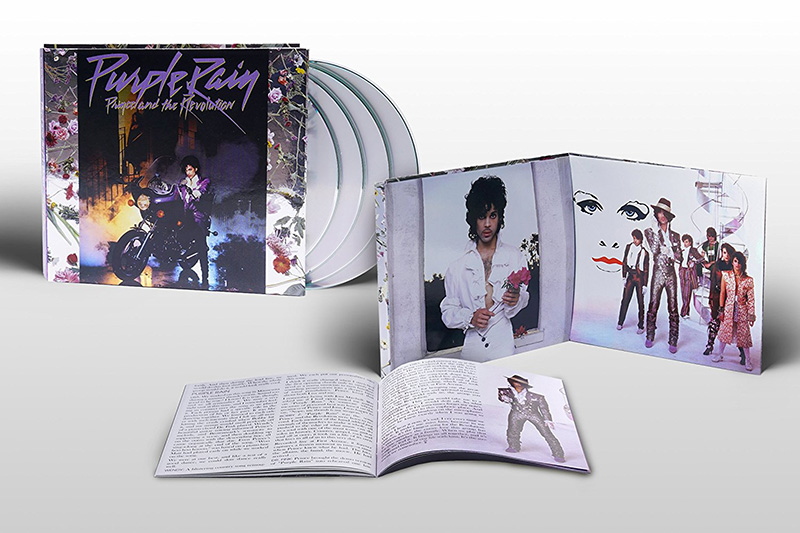 This 3-CD/1-DVD Expanded Edition is a true collector’s item and the ultimate vision of Purple Rain. In addition to the 2015 Paisley Park Remaster and “From The Vault & Previously Unreleased,” it includes “Single Edits & B-Sides” and a never-seen on DVD of Prince and The Revolution Live! in 1985.

Purple Rain remains one of history’s most important, indisputable, and influential albums, but you’ve never heard it like this before. Purple Rain Deluxe boasts the official 2015 Paisley Park Remaster of the original tapes overseen by Prince himself in addition to a new “From The Vault & Previously Unreleased” disc with 11 unheard gems from the storied vault. This is Prince’s final word on his definitive masterpiece. 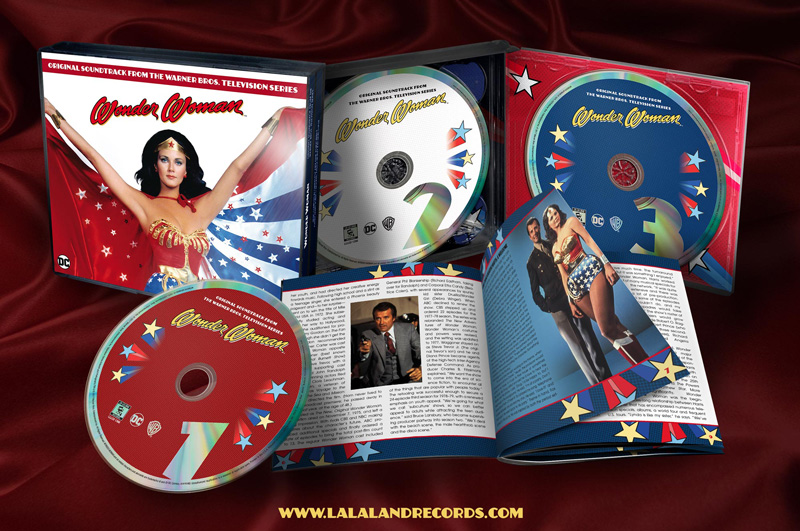 Among this set’s musical highlights are the original TV movie score, the 2nd season premiere score, a dynamic selection of episode scores (The Bermuda Triangle Crisis, The Deadly Sting, Hot Wheels, and Skateboard Wiz, among others!), all three season variations of the immortal main titles, (music and lyrics by Charles Fox and Norman Gimbel), and more! Produced by Neil S. Bulk and mastered by James Nelson from 3-Track WB studio vault elements, this limited edition of 3000 units also features a 28-Page booklet with exclusive liner notes by writer John Takis and a foreward by Wonder Woman comic author and authority, Andy Mangels. Heroic art design by Dan Goldwasser helps spin this celebratory release into action! A must-have for all Wonder Woman and TV/Film music fans past and present! 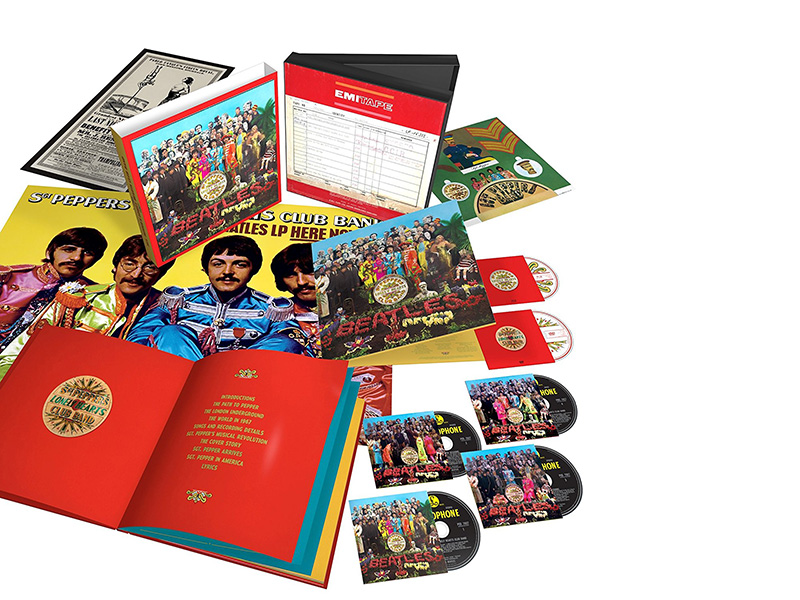 It was 50 years ago when The Beatles’ John Lennon, Paul McCartney, George Harrison, and Ringo Starr astonished and delighted the world, ushering in the Summer of Love with Sgt. Pepper’s Lonely Hearts Club Band, a groundbreaking masterwork that became popular music’s most universally acclaimed album. The album is newly mixed by Giles Martin and engineer Sam Okell in stereo, sourced directly from the four-track masters at Abbey Road Studios in London, and guided by the original, Beatles-preferred mono mix produced by his father, George Martin. This extensive collection gives an unprecedented insight into how The Beatles made their ground-breaking album. The box set features a new stereo version by Giles Martin and 33 tracks from the Sgt. Pepper sessions that place you in the studio as the group develop the songs.

144-page hardback book featuring an introduction by Sir Paul McCartney, comprehensive song-by-song details and recording information, in-depth essays about the design of the cover, the album’s musical innovations and its historical context… and much more. Illustrations include photographs from the recording sessions, handwritten lyrics and Abbey Road documentation.

Plus a replica of the original card insert and two bonus posters. 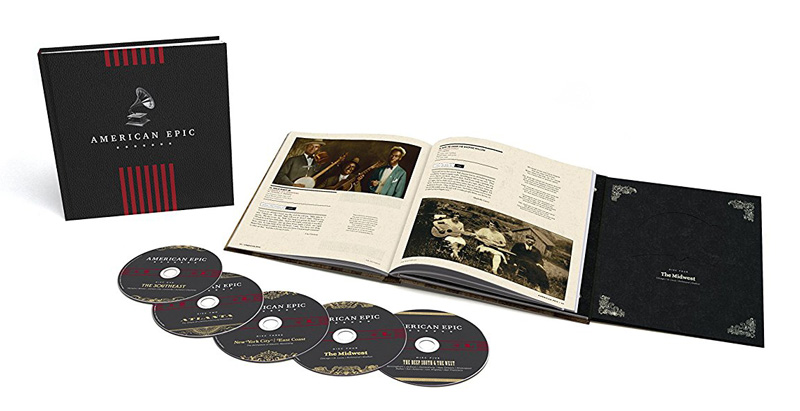 American Epic, a film series produced by Allison McGourty, Duke Erikson and Director Bernard MacMahon, explores the pivotal recording journeys at the height of the Roaring Twenties, when music scouts armed with cutting-edge recording technology captured the breadth of American music and discovered the artists that would shape our world.

The recordings they made of all the ethnic groups of America democratized the nation and gave a voice to everyone. Country singers in the Appalachians, Blues guitarists in the Mississippi Delta, Gospel preachers across the south, Cajun fiddlers in Louisiana, Tejano groups from the Texas Mexico border, Native American drummers in Arizona, and Hawaiian musicians were all recorded. It was the first time America heard itself.

American Epic: The Collection gathers 100 of these original recordings from the 1920s and 1930s in one five-disc set, restored to unprecedented levels of sonic fidelity. For this box set, compiled by Director Bernard MacMahon, engineer Nicholas Bergh refined a transfer process using a mix of both modern and vintage equipment in order to extract the remarkable resolution from the records that is often missed. This reverse engineering approach to the transfer process enabled the restoration team of Grammy Award-winning engineer Peter Henderson, Duke Erikson and Joel Tefteller to get the resulting audio closer to the original performance than ever before.

This is not “remastering,” in the normal sense, but something closer to fine art restoration. The intent is not for people to marvel at the antiquity of these discs, but rather to experience them as vital, immediate performances that speak to us as directly as they did on the day they were recorded not simply great art for their time, but great art for all times. It includes a 100-page book filled with stunning unpublished photographs, quotes from the artists, their friends and families, lyrics for every song, essays and recording notes. Among the artists included are Mississippi John Hurt, The Carter Family, Charley Patton, Jimmie Rodgers, Lydia Mendoza, Nelstone’s Hawaiians, Big Chief Henry’s String Band, Robert Johnson and many others. 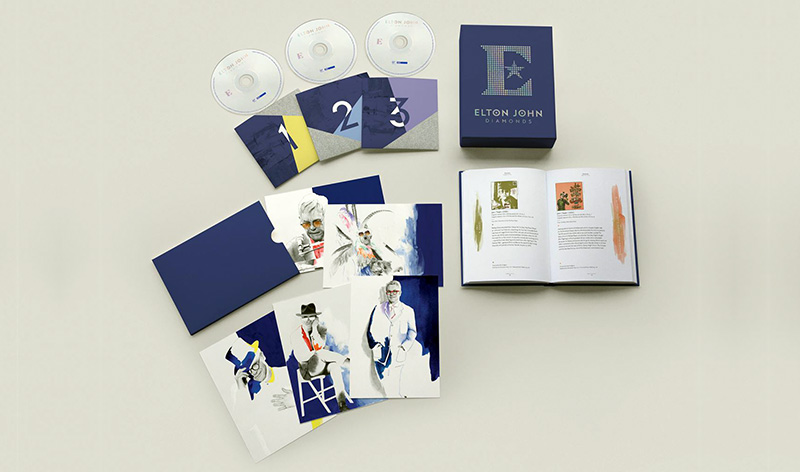 Spanning the many decades of Elton’s unparalleled career, each collection features newly remastered audio, and illustrations of iconic Elton looks from each of the five decades of his career.

The 3 CD limited edition box set contains 34 tracks over two discs, plus 17 bonus tracks of personal favourites curated by Elton himself. It also includes a set of 5 postcard illustrations of Elton as well as exclusive annotations for each track and specially chosen 7” or CD-single picture sleeve graphics from various territories around the world in a 72 page hardback book. 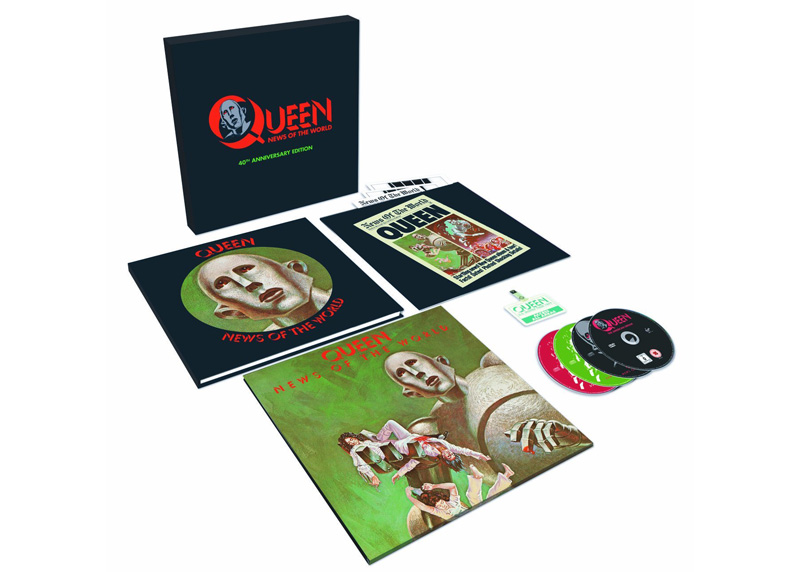 Super deluxe edition of News Of The World from Queen consists of 3 CDs, a DVD, and a LP. Disc 1 (original album) includes “All Dead, All Dead” featuring Freddie Mercury on vocal. The original album version features Brian May. Disc 2 (raw sessions) consists of alternate takes, demo ones, and rough mix versions, including “We Are The Champions” with entirely different rendition and vocal from the previous recordings. Disc 3 includes 19 rare tracks, featuring live, BBC session, and instrumental. The DVD is a documentary Queen: The American Dream featuring never-before-seen footage from the band’s 1977 U.S. tour, both onstage and backstage. The package comes with a hardcover booklet, press kit, posters and more. 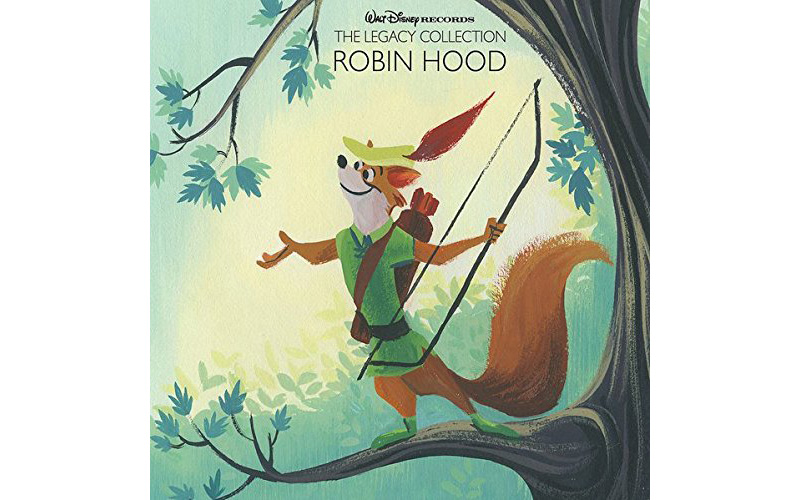 A 2-CD set that features 41 tracks and contains over 1 hour and 30 minutes of content. Disc 1 includes the original songs and score from the film. Disc 2 includes bonus material like previously unreleased demos and bonus tracks. This is the definitive Robin Hood collection targeted to die-hard Disney music fans and uber collectors.

Robin Hood is a 1973 American animated film produced by Walt Disney Productions first released on November 8, 1973. It is the 21st Disney animated feature film, it is based on the legend of Robin Hood, but uses anthropomorphic animals rather than people. The story follows the adventures of Robin Hood, Little John and the inhabitants of Nottingham as they fight against the excessive taxation of Prince John, and Robin Hood wins the hand of Maid Marian.

Music by George Bruns. The song “Love” was nominated for Best Original Song at the 46th Academy Awards.

In this article:2017 Holiday Gift Guide