We are less than two weeks to Christmas. But who cares!

We have some comic books to talk about!! Let’s get started! 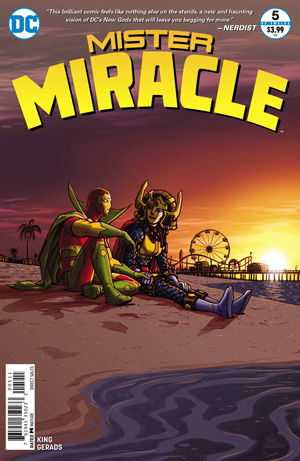 One of the best series to debut this year is this title. It started off strong and just kept rocking and rolling. Tom King has really come into his own, and this is one of the best titles of his writing career thus far.

This story is beautiful. It shows what happens when Mister Miracle spends his last night on Earth. You see, Mister Miracle has been sentenced to death by the new Highfather of New Genesis.

What a jerk, right? So, before he goes, he takes Big Barda out for a date. The results are extraordinary.

The art is just spectacular on this. Gerads is at the top of his game too and that’s saying something. His art works so well with the storytelling, it’s uncanny.

Pick this up. It’s truly some of the best work in the comics field I have ever read. 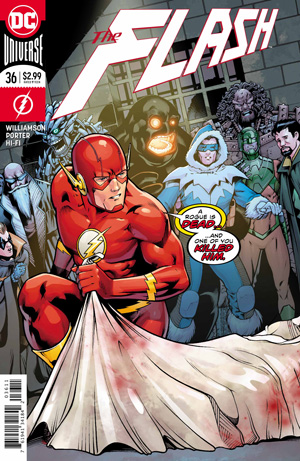 The Flash #36
Written by Joshua Williamson
Illustrated by Howard Porter

The Flash has had another great year of stories.

Josh Williamson really has put our hero through his paces. Barry Allen is a real human here and it’s to Williamson’s credit that the book is so cool.

This is the start of a new storyline called “A Cold Day in Hell.” One of The Flash’s rogues has been murdered inside Iron Heights prison.

It’s up to The Flash to figure out the mystery of it all. But is he emotionally up to the task? Find out here!

It doesn’t make it any less good, it just feels we may be in the final act. So pick it up now. Get into this title if you are not reading it. It’s well done indeed. 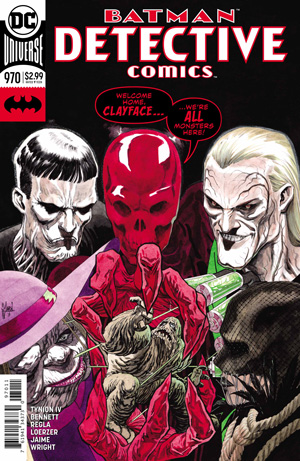 In thirty issues, this title will hit the landmark 1000th issue. I’m excited about that. I really hope before that we get a strong lead up to that issue.

Right now it’s a decent read, but I’m not too sure where it might be going.

This is part two of the storyline “The Fall Of The Batman.”

In it, the Victim Syndicate are trying to eliminate all of the Batmen and Batwomen out there. There is a lot of action but a lot less focus.

What is it all leading to? Some place good I hope.

The art by Martinez is good. It’s clear and concise but it’s not too flashy. I hope this book regains it’s focus. Right now, it’s a little bit lost for me. 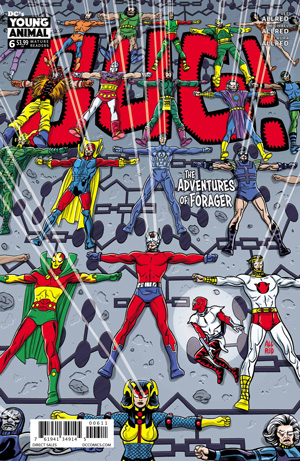 Bug! The Adventures of the Forager #6
Written by Lee Allred
Illustrated by Michael Allred

This wonderful comic book has come to a close.

The Forager is one of those forgotten characters that the Allred’s have turned into something wonderful. I am sad it’s over but it’s been a hell of a ride.

The villain known as Chagra told everyone that he wouldn’t alter reality until Bug! returned to New Genesis.

The problem is he may balk on his promise.

Who are we kidding?

Of course he’s going to balk. It leads to a dynamic ending for this series that will leave a smile on your face.

The story is a bunch of fun. The art is some of Allred’s best. The two brothers obviously have passion for the project and it shows.

This is a book that you have to read. Pick it up. It’s awesome. 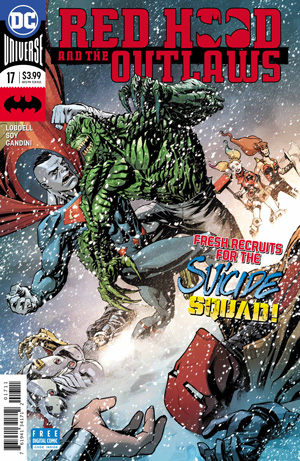 Scott Lobdell has written one hell of a Bizarro story. He has taken the character and made him fresh.

Lobdell has been a talent for many years in this industry and he really is a seasoned pro. This book has been an underrated gem from the very start.

Red Hood and a few of the Outlaws (including Bizarro) have to travel to the Arctic for a mission with the Suicide Squad.

This group of people have quite a mission. They may kill each other first however!

Dexter Soy does a hell of a job drawing this title. He’s underrated as well and has been for years. His storytelling and graphics are just plain fantastic.

Pick this up. You’re missing out if you don’t. 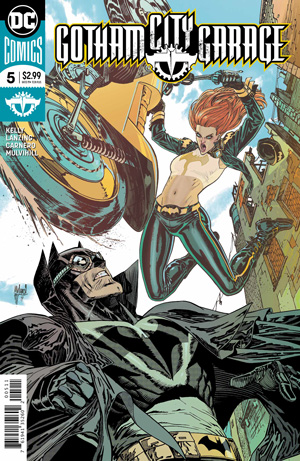 This has been a nice look at an alternative DC Universe. The writing is strong and you can’t look away. If you haven’t given this a shot yet, you totally should.

It’s been nothing but a blast.

This issue focuses on the Barbara Gordon of this alternate universe. She is tasked with figuring out villainous act. It may have started off looking simple on the surface but she slowly discovers it’s anything but.

This book moved fast and furious. The art is good and it holds the reader’s attention.

Pick this up. It’s been a lot of fun thus far and promises a lot more to come!

I’m looking forward to it. 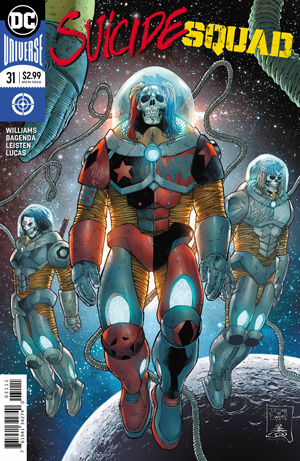 This is another chapter of the storyline “The Secret History of Task Force X!”

Rob Williams writes yet another nutty tale but at this point I’m just sitting back and seeing where the hell it leads me. It’s trying sometimes but for the most part it’s been enjoyable.

Meanwhile, Deadshot and company finally figure out who may be responsible for the war. And let me tell you: It’s not good news.

The art is fairly decent here. I think it may be time for a new writer at this point however. It’s wild for sure but lacks a sense of direction it seems. Still, it’s a boatload of crazy.

Not bad overall, but it could be better. 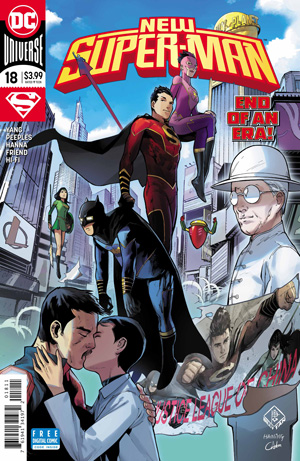 All-Yang is looking to take over the world! Can Kenan Kong and the Justice League stop this dastardly threat?

And if they do, what is next for Kenan?

The art is strong here as well.

Honestly, it’s a great comic book that I initially had no hopes on. It continues to show me month after month just how viable this character is.

Pick it up. It’s a strong read. 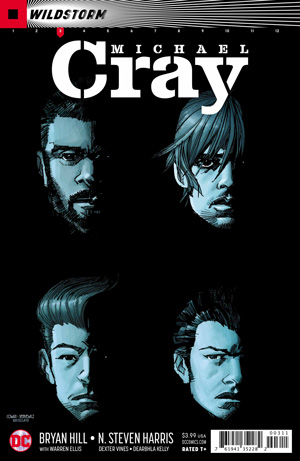 This book picked up after a debut issue that didn’t do to much for me.

The story is going along now and I’m enjoying it. Hill has a story in mind and it wasn’t apparent what that was at first. Now, I re-read everything up to this point and it’s something I’m looking forward to seeing how it turns out.

So, Barry Allen has come into the crosshairs of Mr. Cray. Barry seems to have powers and a suit. Cray wants to now take care of this fool. But can he?

Or will this version of The Flash take out Cray?

The story moved at a quick pace. The art is fairly good as well. This is the issue where the team gels perfectly and it’s exciting to see. Pick it up. It’s a good issue in a decent series. 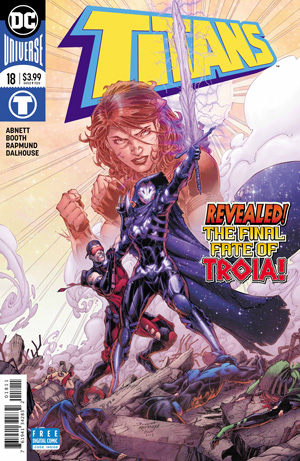 I have a confession: I love this iteration of the Titans team very much.

It’s been a solid book right from the start and I truly think Abnett has a nice feel for it all.

This is a hell of a story. The Titans are defeated. Wally West is dead!

The worst part is Donna Troy needs to go up against a twisted version of herself called Troia. Can Donna defeat her?

The results are incredible.

The story is thrilling and has some good twists. The art is pretty good too. This is a well done and entertaining Titans run. Give it a shot. It’s well worth reading. 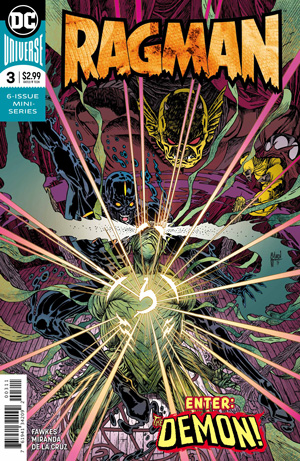 Ray Fawkes may in fact be the best choice to write this comic book. He has an independent sensibility that translates well to this series.

Ragman has never been a big favorite of mine but I’m liking how this is turning out.

Our protagonist Rory is learning how to use the Suit of Souls. He hits the streets of Gotham City, finding and interrogating demons he comes along. Ragman starts to make a name for himself. It is then he comes across the demon known as Etrigan!

The story keeps your interest from start to finish.

The art is pretty good as well. It’s a good comic book limited series and I for one can’t wait to see how it ends.